Four out of the first five months of 2020 have been wetter than normal. As the map below shows, most of the state, entered June with a calendar year precipitation surplus of 2 to 10 inches. 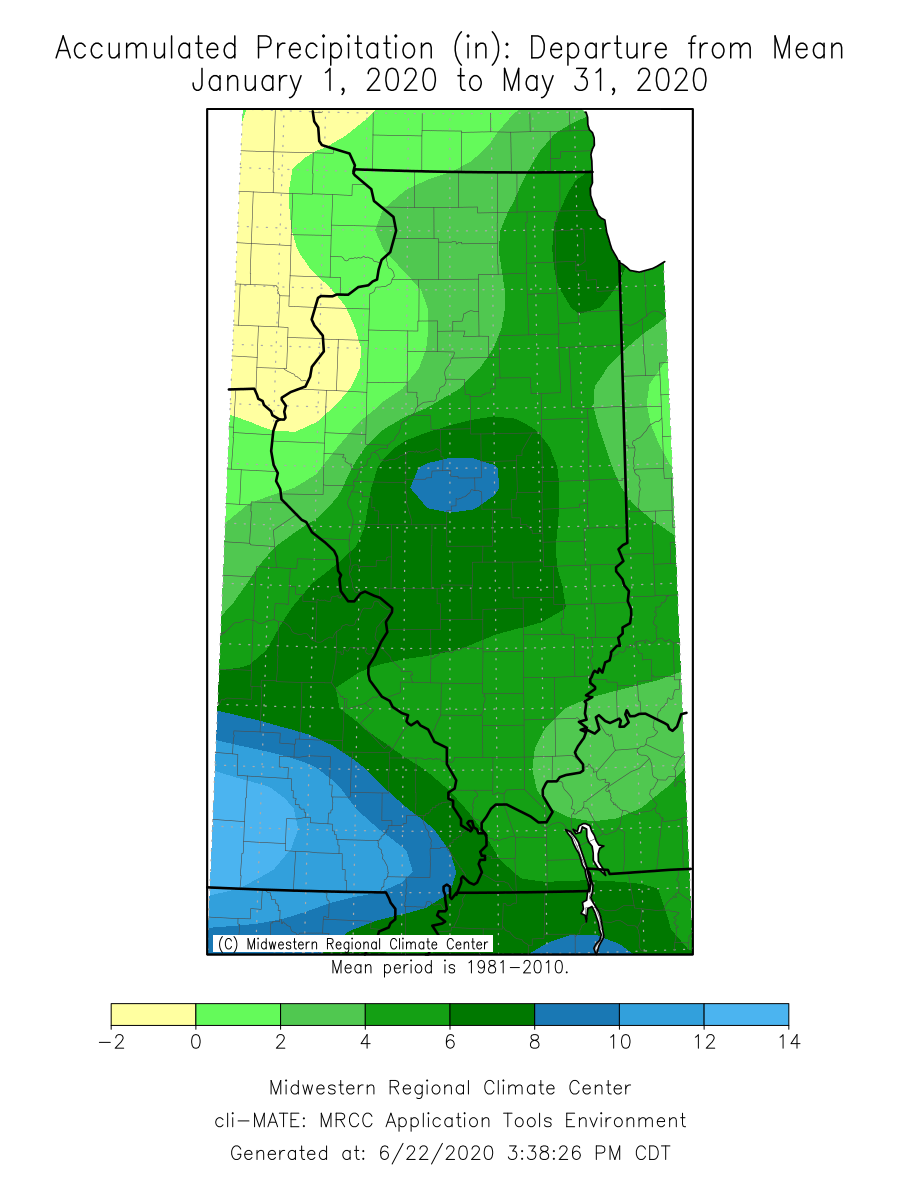 However, more recently rain has been scarce in most of the state. Ironically, the driest area in the state through May has received abundant June precipitation, while most other areas have seen less than 1.5 inches of total June precipitation (through the 21st). In areas of southwest and south-central Illinois, totals so far represent less than 25% of average precipitation by this time of June, including the driest first 21 days of June on record in Pinckneyville in Perry County. 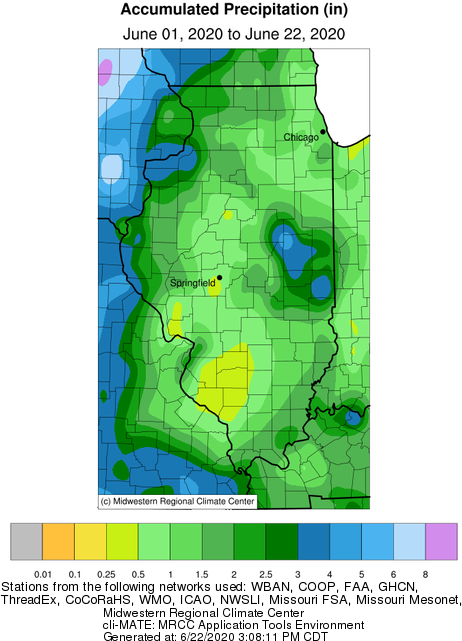 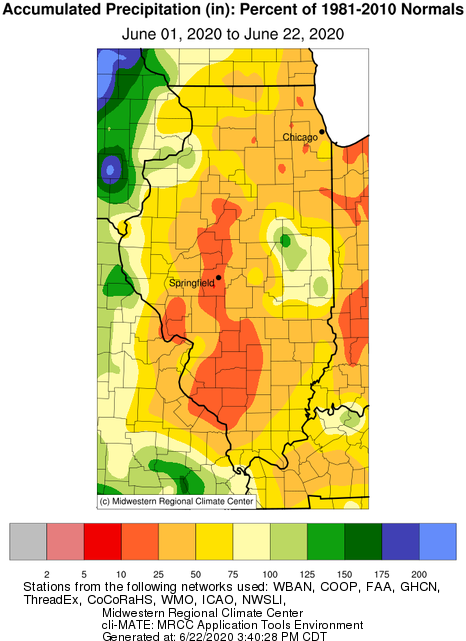 Three full weeks with little to no precipitation and increased evaporative demand has resulted in depletion of surplus soil moisture in many places around the state. The plot below shows 8-inch soil moisture observations at the Illinois Climate Network (ICN) station in DeKalb. The thick, red line shows the daily evolution of soil moisture in DeKalb between June 1st and 22nd of this year, with respect to all other record years back to 2003. I denoted soil moisture conditions during other, noteworthy dry years in northern Illinois. In general, the plot shows the rapid decline in soil moisture in response to dry, warm conditions this month.

For a broader view of soil conditions the maps below show soil moisture on June 21st from all ICN stations at 4, 8, and 20 inches (from left to right). Generally speaking, observations exceeding 0.35 to 0.40 indicate saturated or nearly saturated conditions, while observations in or below the teens indicate conditions at or approaching the wilting point. Not surprising, 4 inch and 8 inch soils have dried quite a bit more than the 20 inch soil; however, nearly all stations are still drier than average for this time of the year at 20 inches. 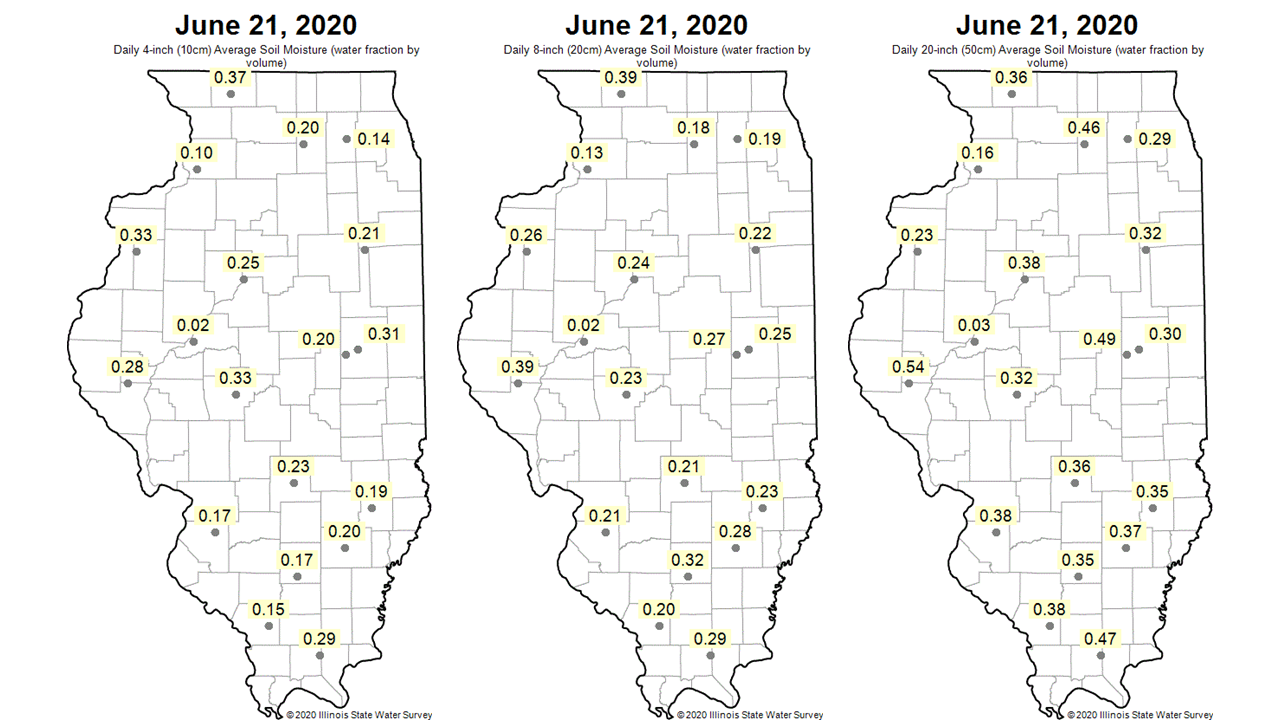 Early summer is a challenging time to experience moisture deficit, both because crops and other vegetation are actively growing and because evaporative demand and evaporation tend to increase as temperatures continue to rise into July. However, the 7-day forecast indicates potential for rainfall to alleviate some dryness in northeast and east-central Illinois. There is less of a chance of reprieve from dryness for southern Illinois over the next week.

At the same time, the 6- to 10-day and outlooks from the Climate Prediction Center indicate elevated odds of wetter than normal conditions through the end of June and into July.