May was much colder and moderately wetter than average across Illinois, bringing an end to a wet climatological spring season. The preliminary statewide average May temperature was 60.5 degrees, 2.2 degrees below the 30-year normal and the 39th coldest on record. Preliminary statewide average total precipitation for May was 5.41 inches, 0.81 inches wetter than the 30-year normal and the 25th wettest on record.

May average temperatures ranged from the high 50s in northern Illinois to the low 60s in southern Illinois. May was colder than average in all but the very northeastern corner of the state. Overall, the May statewide average temperature was 60.5 degrees, which was 2.2 degrees below the 30-year normal and 39th coldest on record. 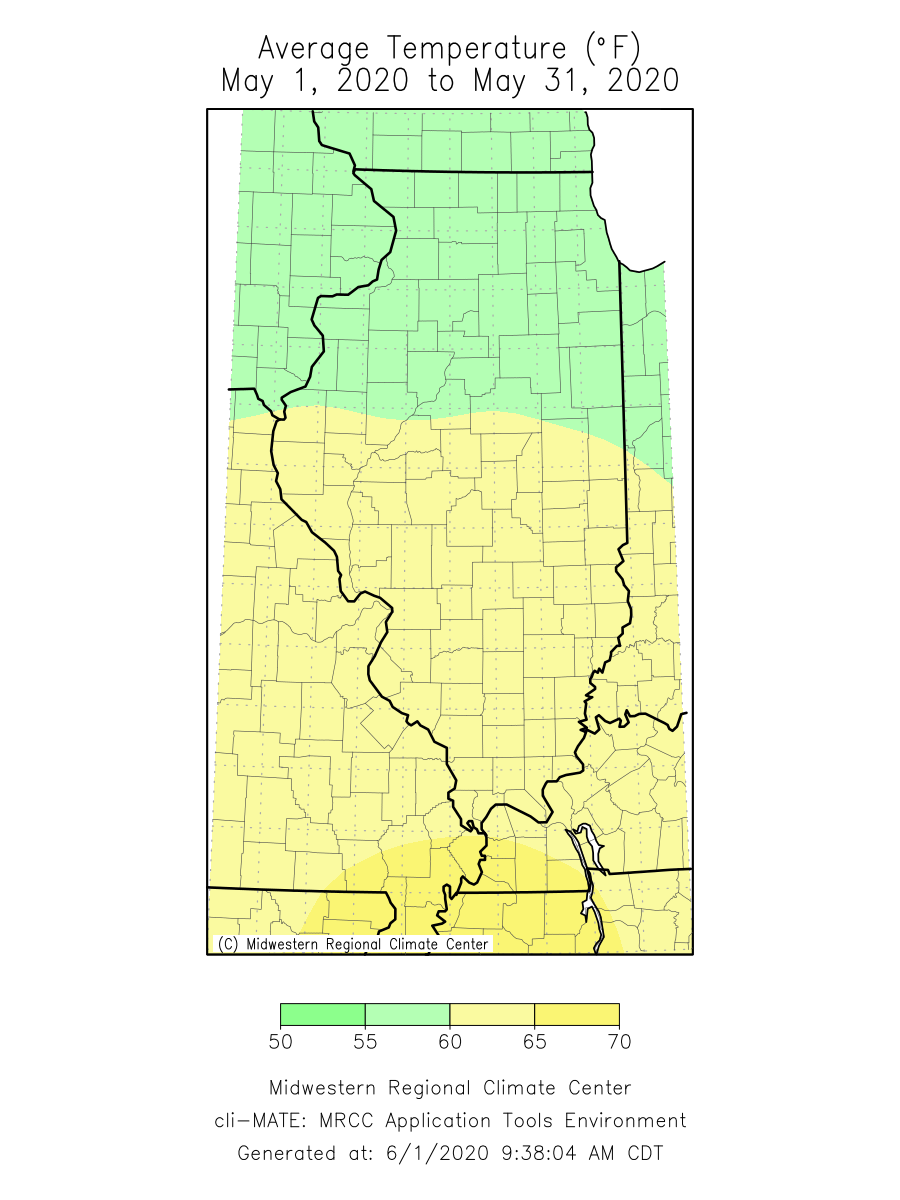 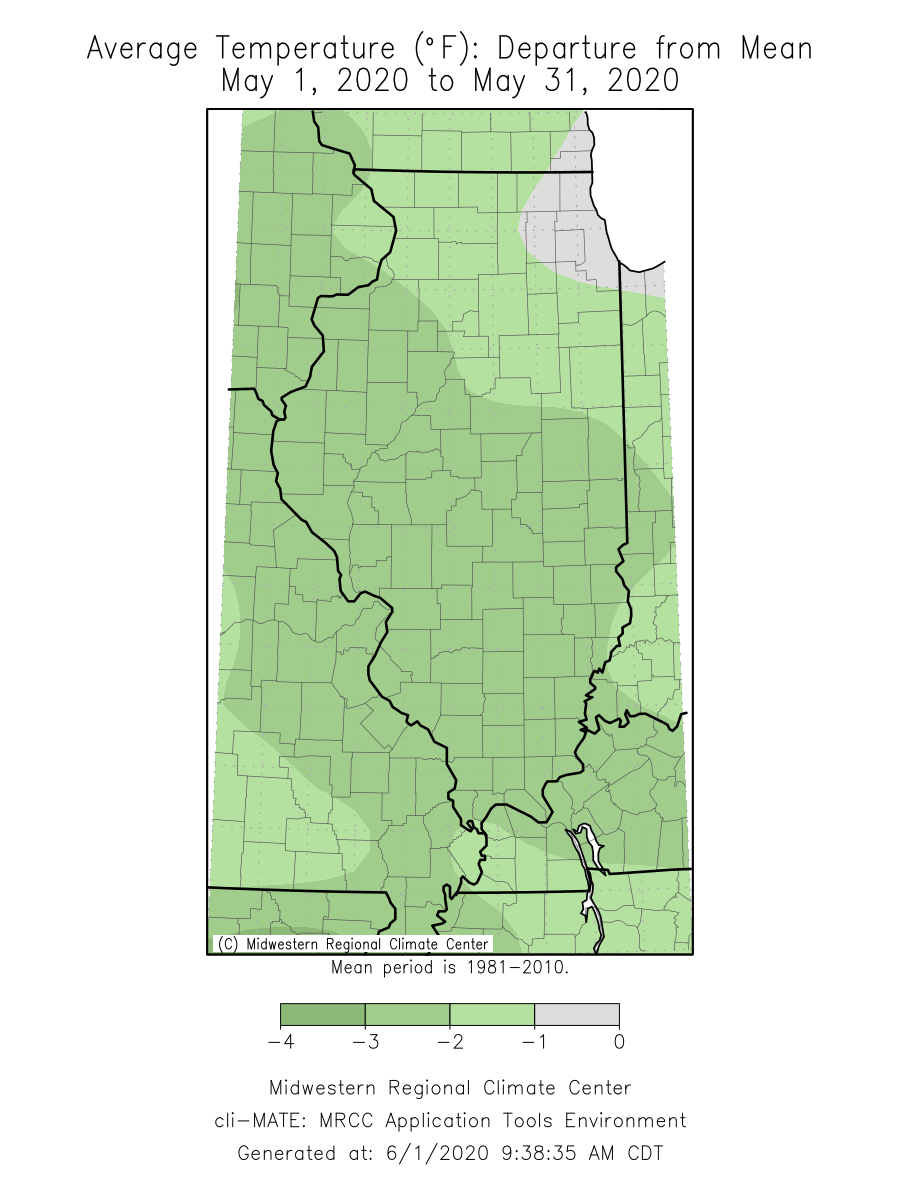 Both April and May this year were colder than normal statewide, following three consecutive warmer than normal months to start the year. Although official numbers will not be released until later this month, it is likely the 2020 climatological spring was very close to the 30-year normal.

Another Record-Breaking Wet Spring in Chicago

May started dry, with most areas of the state receiving less than an inch of rain in the first two weeks. However, a series of storms moved across the Interstate 55 corridor around the middle of the month, leaving widespread totals of 2 to 4 inches between the St. Louis Metro East and Chicagoland.

The months of May through September tend to have a larger percentage of precipitation that comes from small-scale convective storms than cold season months. Despite their size, these storms can generate large precipitation totals in a matter of hours; however, because of their size and relatively short lifespan, they can create large disparities in precipitation over short distances. The storms that moved through the state in the middle of last month generated very heavy rainfall over the Chicagoland area and resulted in over 7 inches of rain in four days over a large area of the city and suburbs. Over 3.5 inches was recorded at Chicago’s O’Hare airport on May 14, the largest single-day May precipitation total ever recorded at that station.

The rainfall resulted in the wettest May on record at both Chicago O’Hare (9.51 inches) and Midway (7.65 inches) airport stations. At O’Hare, this last month broke the previous May record set last year in 2019, which at that time broke the previous record set in 2018. This makes three consecutive years that the O’Hare station has broken May total precipitation records, and all five of the wettest Mays on record at O’Hare have occurred since 2004.

Heavy rainfall across northern and central Illinois led to flash flooding in developed areas as well as inundated fields and standing water in rural parts of the state. Gauges in both the Illinois and Des Plaines Rivers topped flood stage, including a likely new record crest on the Illinois River at Morris.

The statewide average total May precipitation was 5.41 inches, which is 0.81 inches more than the 30-year normal and 25th wettest on record. 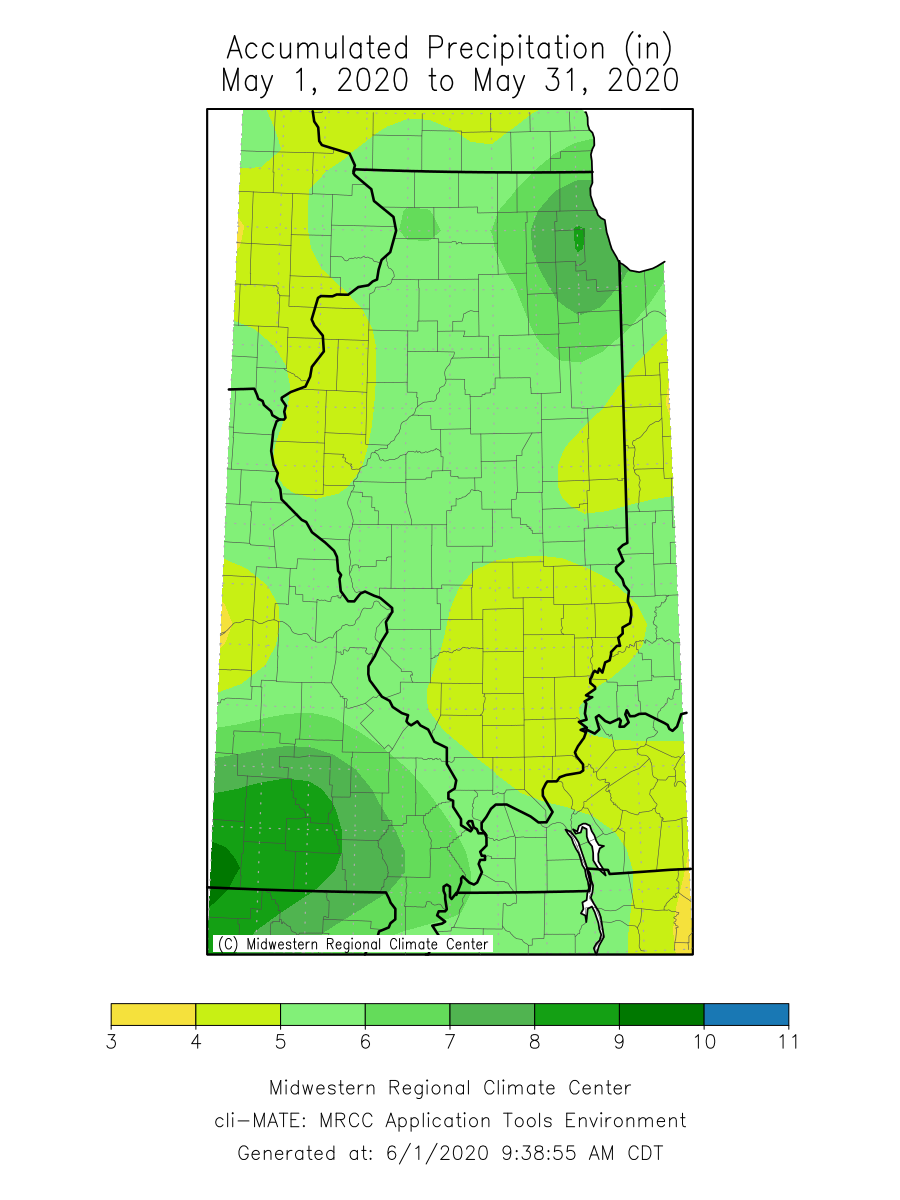 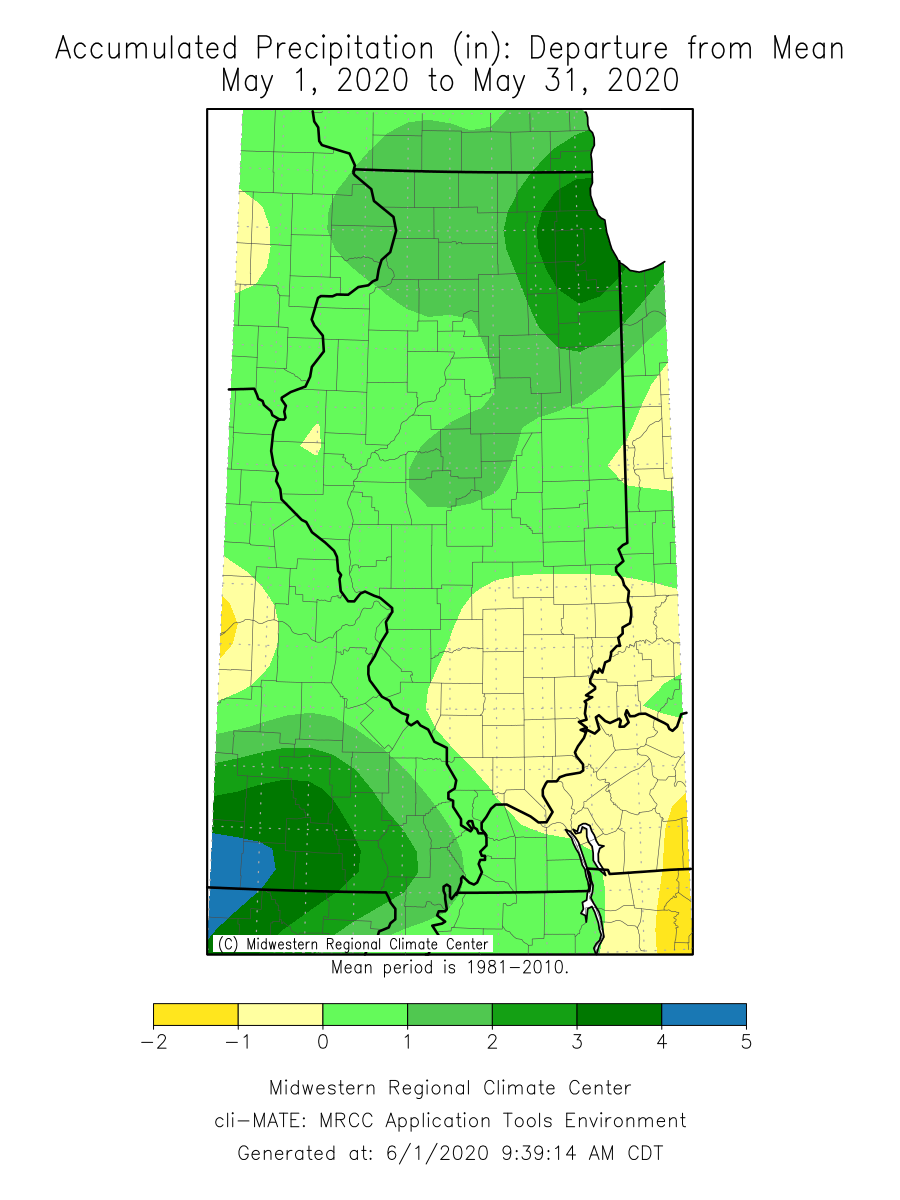 May ended a wetter than average climatological spring, with most areas of the state receiving between 100 percent and 125 percent of normal precipitation. Interestingly, the statewide average spring total precipitation has been above the 30-year normal only 5 times in the past 10 years: 2020, 2019, 2017, 2013, and 2011. However, the average departure from normal in those five years was 4.75 inches, whereas the average departure from normal on the five drier than normal springs was only -1.38 inches. This means that although we’ve had an even split between drier and wetter than normal springs over the past decade, the wet springs have been very wet.

Although only trace snowfall occurred this last month, most areas in northern Illinois experienced more snowfall than average in the climatological spring. Spring snowfall totals ranged from less than an inch in most of central Illinois to over six inches along the Interstate 80 corridor. 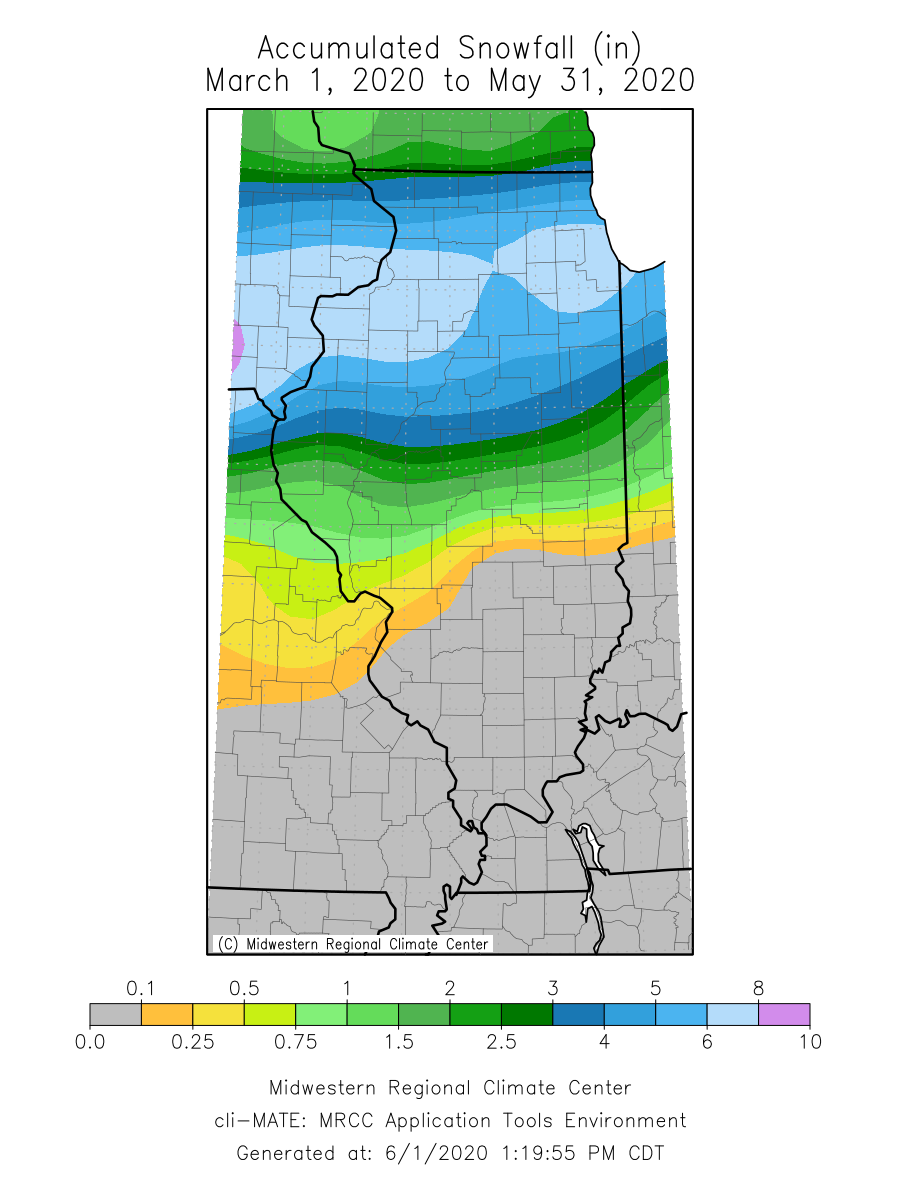 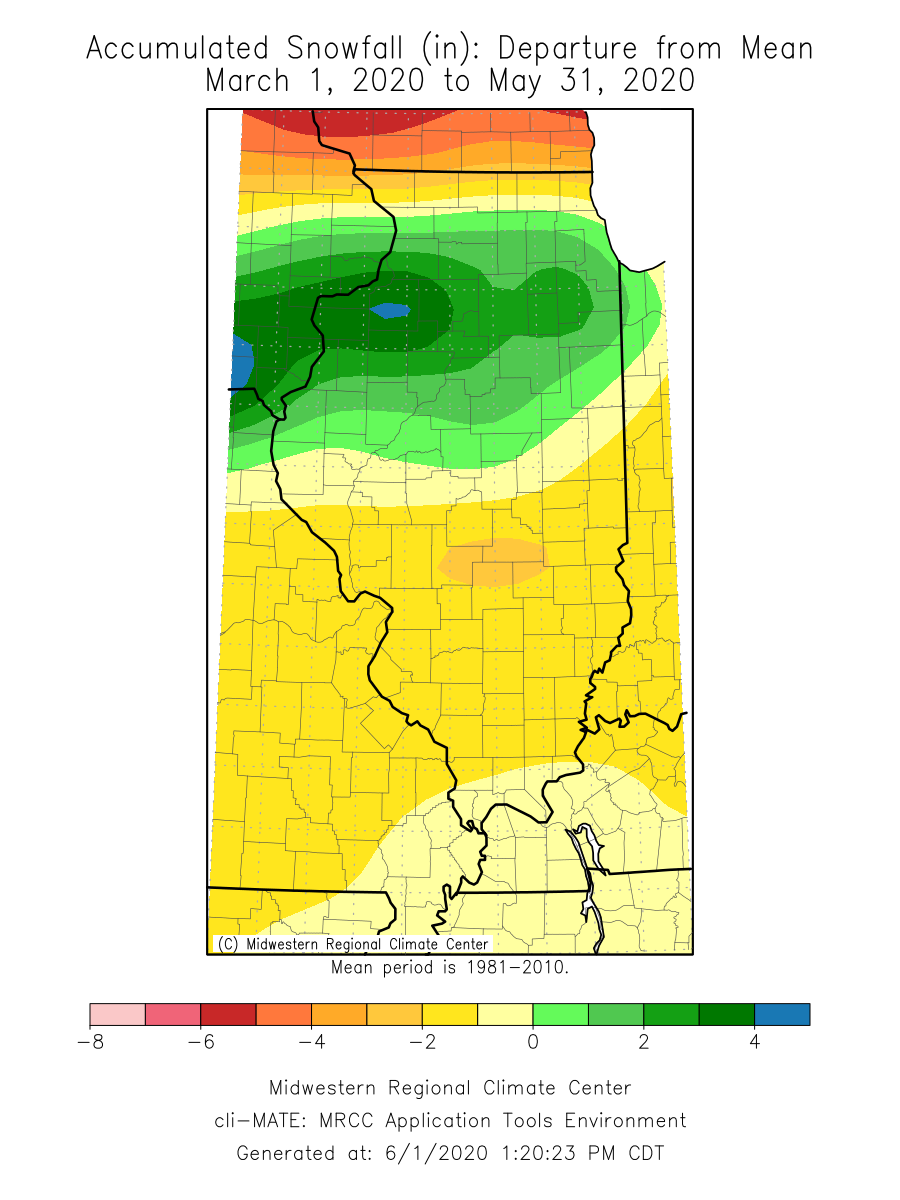 Short-term 8- to 14-day outlooks from the NOAA Climate Prediction Center show elevated odds of both above normal precipitation and above normal temperatures across the state.

Longer-term outlooks for climatological summer show continued elevated odds of wetter than normal conditions, but equal chances of above normal, normal, and below normal temperature.