March was warmer and wetter than average across the state, continuing the pattern from winter. The preliminary statewide average March temperature was 43.5 degrees, 2.20 degrees above the 30-year normal and the 28th warmest on record going back to 1895. Preliminary statewide average total March precipitation was 3.96 inches, 1 inch wetter than the 30-year normal and tied for the 34th wettest on record.

Much like the first two months of 2020, March temperatures were consistently above the long-term average.

The first two months of the climatological winter season were much warmer than average, with very few cold air incursions. The plot below shows the March daily average temperature as a departure from average in Rockford. Since the start of 2020, over 70 percent of days in Rockford have been warmer than the long-term average. This has caused 2-inch and 4-inch soil temperatures to generally remain above freezing over this time, according to observations from the Illinois Climate Network (https://www.isws.illinois.edu/warm/soil/). 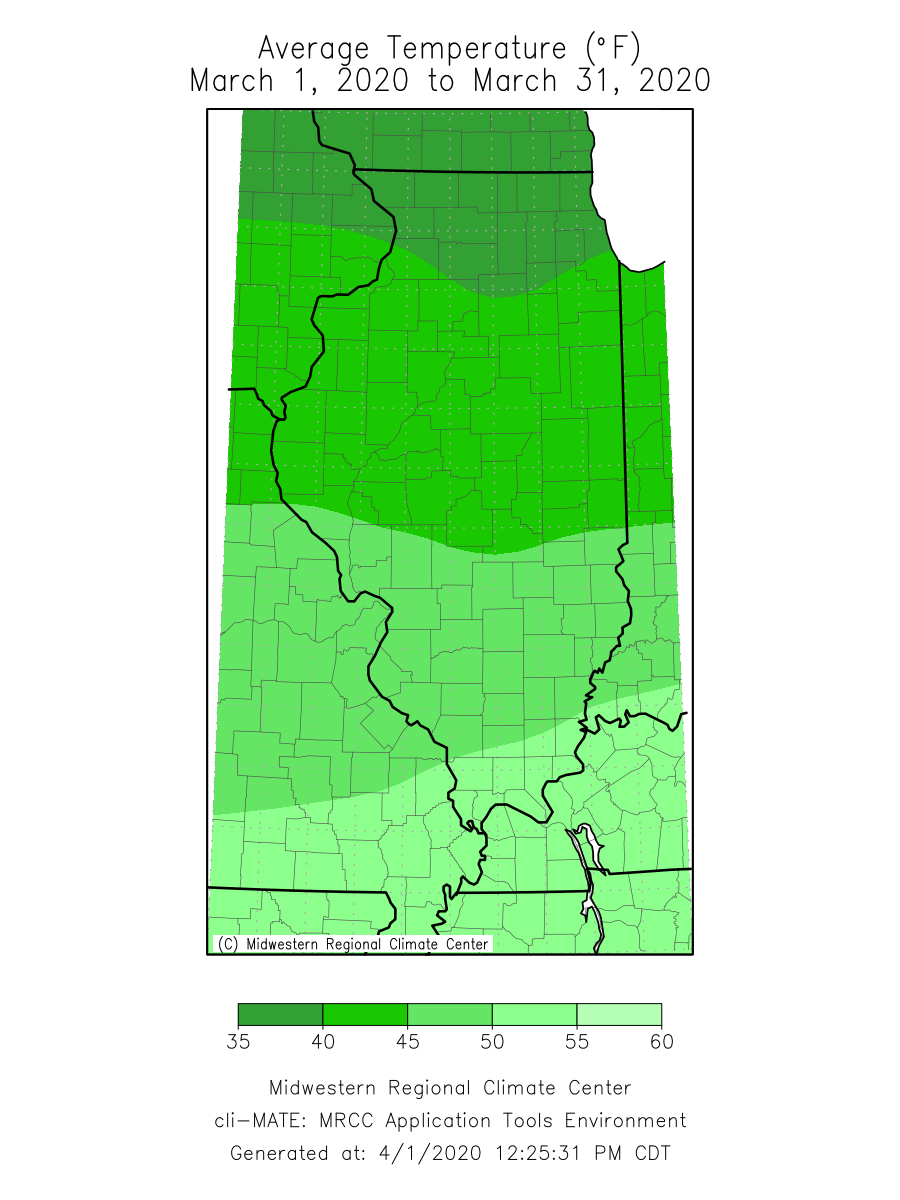 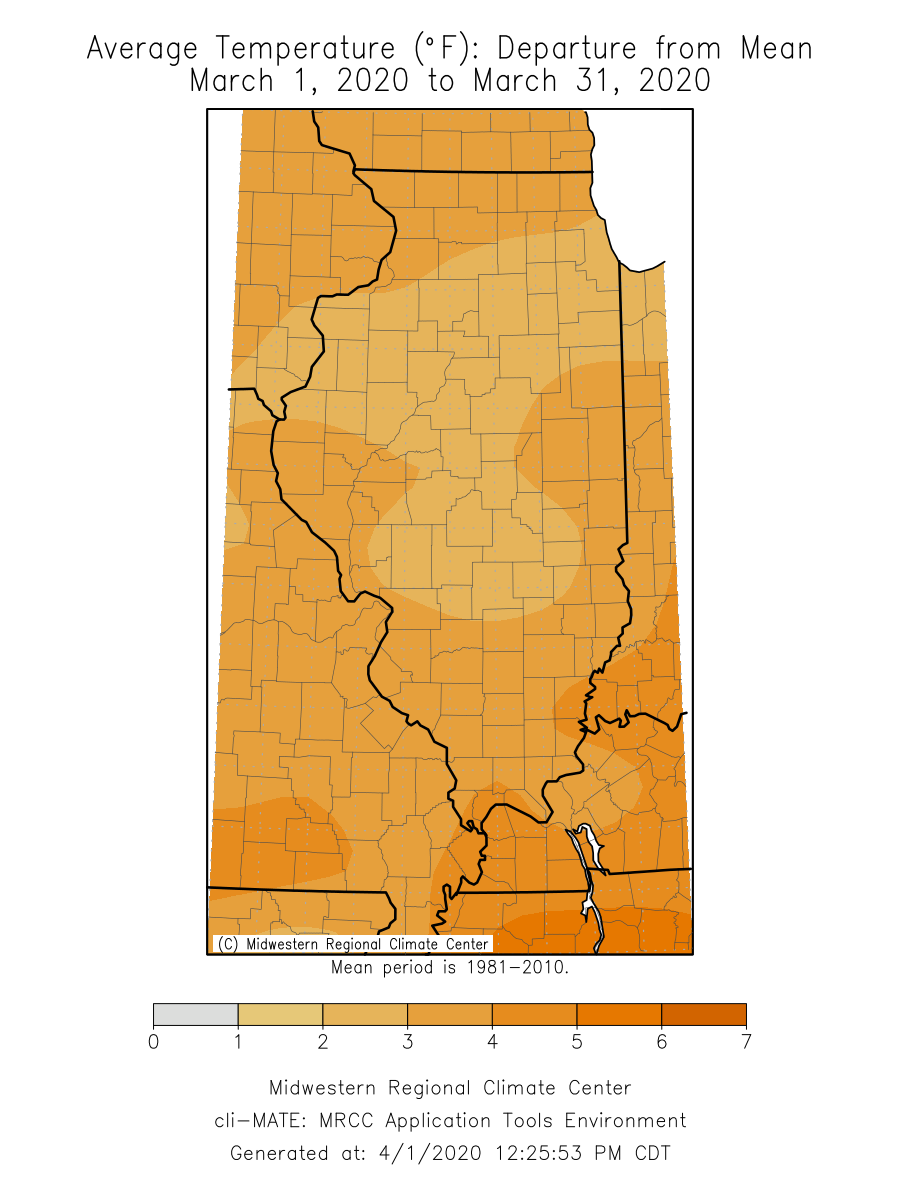 One-day precipitation totals reached 4.50 inches in Clay County, which set the all-time March one-day precipitation record at the station in Clay City and broke the previous record by over three-quarters of an inch. Other large one-day totals from the March 20 storms included 3.85 inches in Mt. Vernon in Jefferson County and 3.55 inches in Olney in Richland County. With these one-day totals subtracted, March 2020 was very close to March 2019 total precipitation in southern Illinois; however, because of this event, most areas in southeast Illinois received between 1.5 and 2.5 times the amount of March 2019 precipitation this month.

Last month was the wettest March on record at Rock Island Lock & Dam 15, with 6.17 inches recorded. The wettest place in the state last month was Clay City with 8.31 inches. 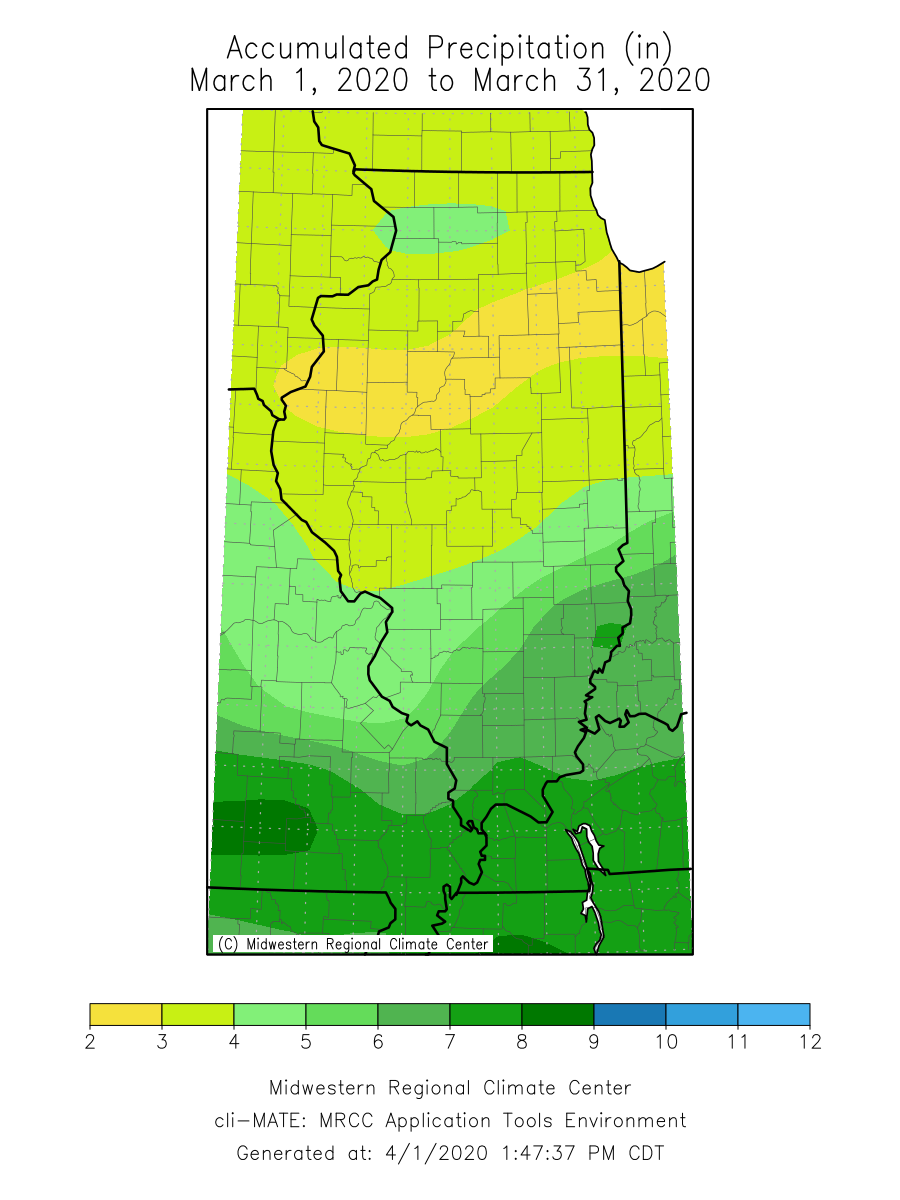 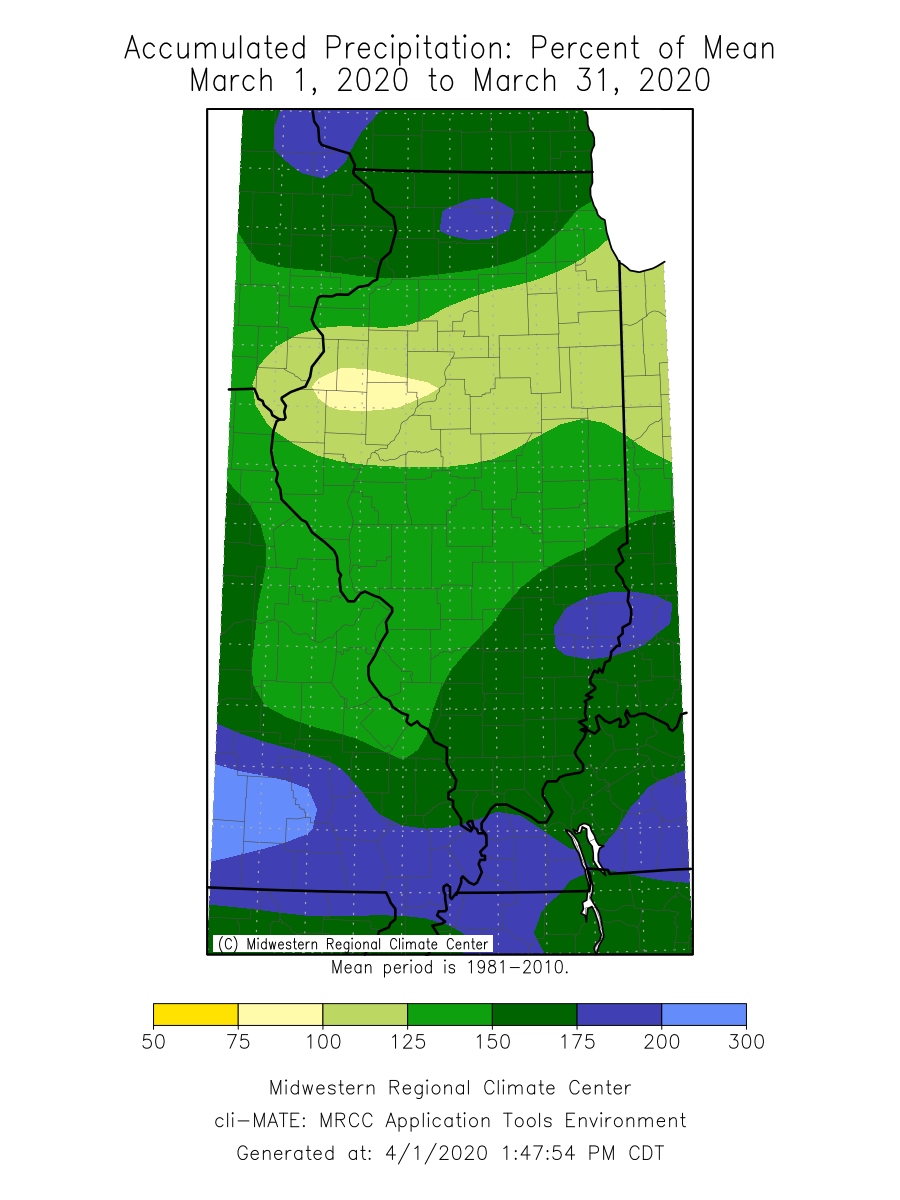 Overall, the preliminary statewide average total March precipitation was 3.96 inches, exactly 1 inch more than the 30-year normal and the 34th wettest on record. Although the March average does not reflect the 5- to 6-inch differences in precipitation between central and northern/southern Illinois.

Most of the northern half of the state experienced measurable snowfall last month. March totals ranged from around 6 inches in northeast Illinois to just over one-tenth of an inch along the Interstate 70 corridor. A winter storm on March 22 and 23 accounted for the vast majority of snowfall in the northern part of the state, with one-day totals exceeding 6 inches in Grundy County. Morris in Grundy County was the snowiest point in the state in March, with just over 7 inches of total snowfall. 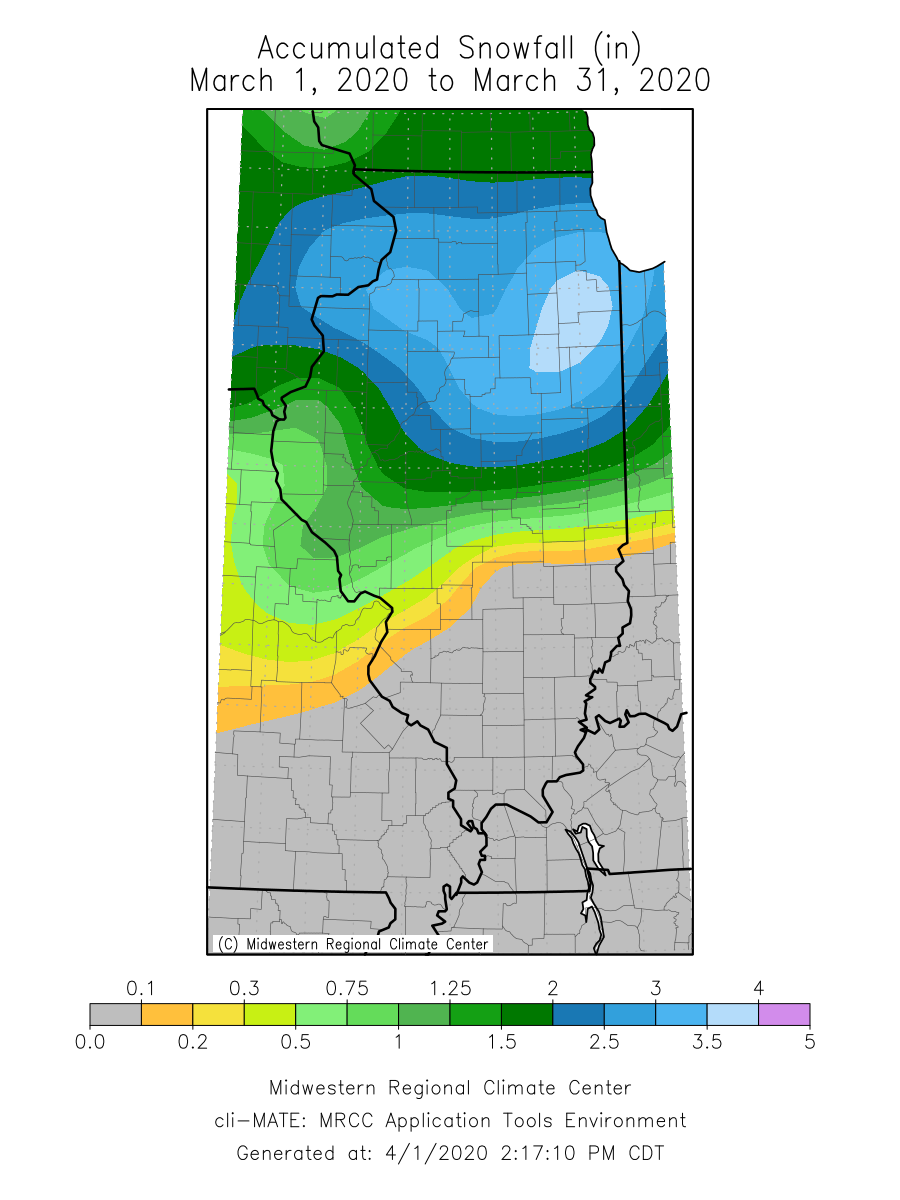 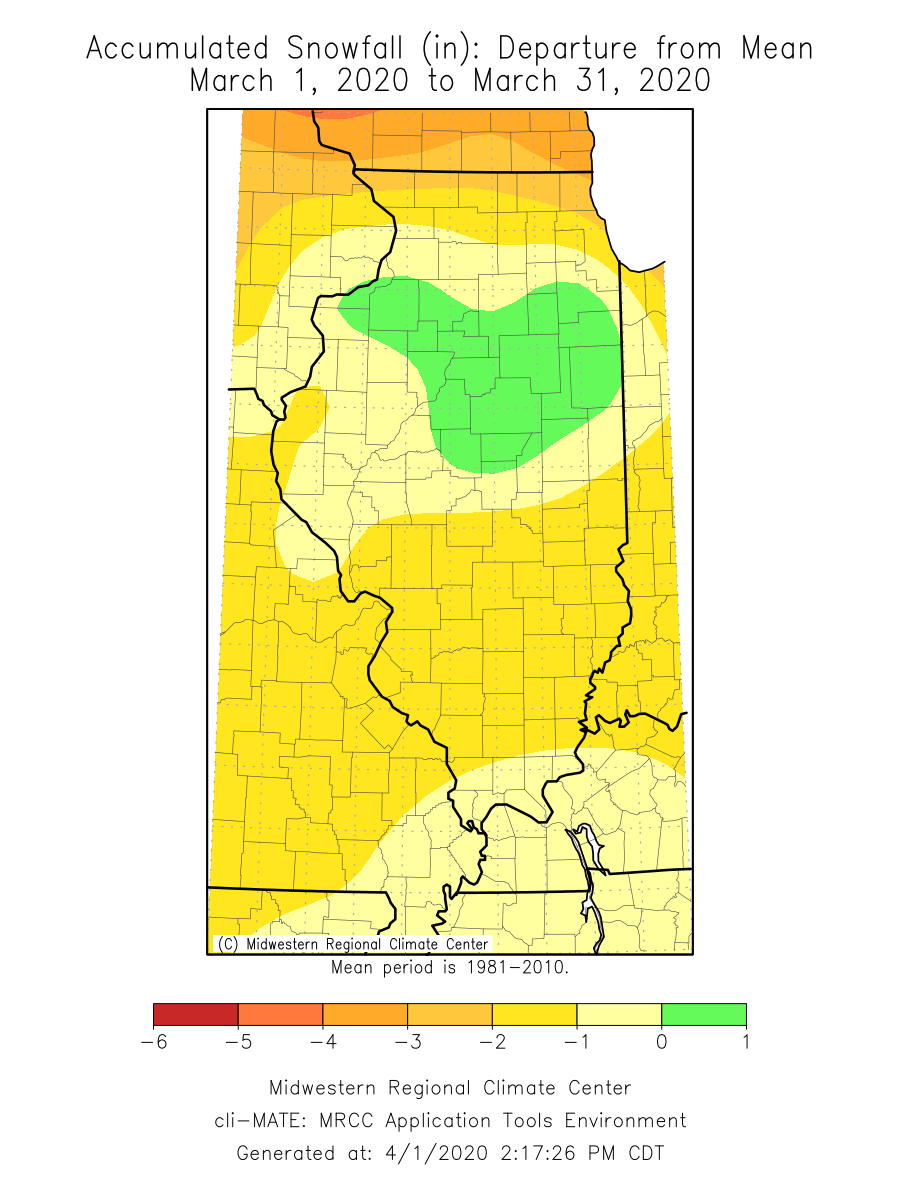 March total snowfall departures mimic the spatial patterns for the entire winter season. Most areas of western, northwest, and west-central Illinois had totals within 5 inches of the long-term average, whereas most counties south of Interstate 70 as well as counties in the Chicagoland metro area have experienced 5 to 10 inches below average snowfall since the first snow of the season. 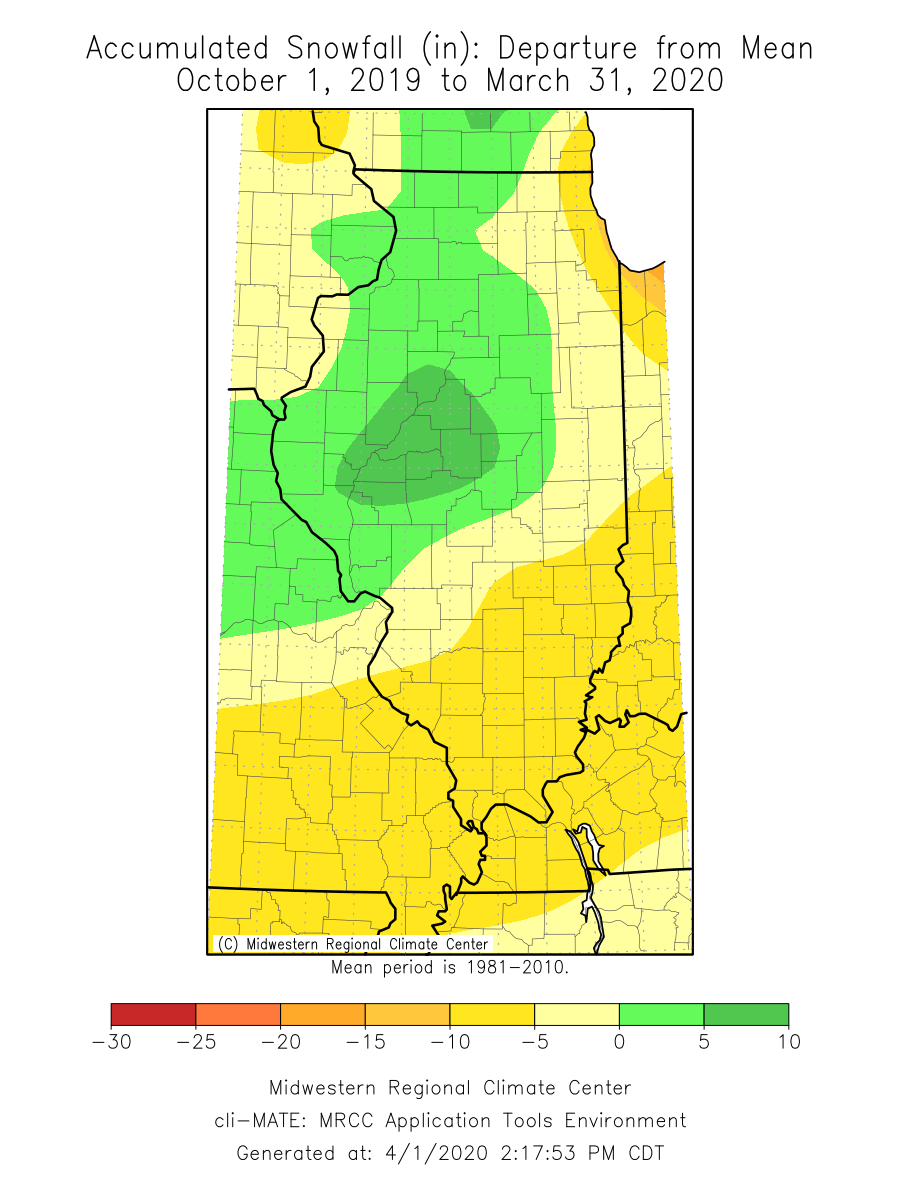 Illinois experiences severe weather and storms in all calendar months, but March often begins the unofficial severe weather season. This last month we had numerous severe weather and storm reports, ranging from snowstorms to large hail and a few tornadoes. Trained spotters reported 2-inch hail in both Williamson and Vermilion Counties last month, with many more reports of 1.5- to 1.75-inch hail across southern and central Illinois. The AWOS station in Hyde Park in Cook County recorded a 61 mph non-thunderstorm wind gust on March 29. Finally, multiple tornadoes were reported in Illinois last month in southern and west-central Illinois, including three tornadoes between Peoria and the Quad Cities on March 28. One of these, an EF-1 tornado, developed just a quarter mile east of the Peoria International Airport, according to the Lincoln National Weather Service https://www.weather.gov/ilx/032820Tornadoes).

Short-term 8-14-day outlooks from the NOAA Climate Prediction Center show strongly elevated odds of both above normal precipitation and above normal temperatures across the state.

Longer-term 30-day outlooks are similar to the 8-14 day outlooks, with continued elevated chances of warmer and wetter conditions across the state for April.

Heavy precipitation in northwest and southern Illinois, combined with continual snowmelt in the Upper Midwest has continued the threat of flooding along most major rivers in Illinois. Currently, gauges along the Mississippi, Ohio, Illinois, and Wabash Rivers are at or above minor flood stage, with nine gauges in moderate flooding, according to the National Weather Service River Forecast Center.

Mt. Carroll reclaims the title for the record minimum temperature in Illinois

Champaign, Ill., 3/6/19: An Arctic outbreak in late January 2019 led to widespread bitterly cold temperatures across much of the Upper Midwest, including Illinois. On the morning of Jan. 31, the cooperative weather observer at Mt. Carroll, located in Carroll County, reported a temperature of -38 degrees.

After a comprehensive review, the State Climate Extremes Committee (SCEC) unanimously voted to validate the -38 degrees reading as the new official state record minimum temperature. This committee ensures that the observation is meteorologically plausible, is within a range that the reporting instrument can detect, and that the instrument is in proper working order.

The previous minimum temperature record for Illinois was -36 degrees set in Congerville, located in Woodford County, on Jan. 5, 1999. The coldest temperature prior to the Congerville record, -35 degrees, was also set at Mt. Carroll in January 1930, and was later tied with Elizabeth in February 1996.

The Mt. Carroll station is a traditional daily observing station located in northwestern Illinois. It has been in service, with minor interruptions, since 1895, and has been observing temperatures since 1897. It is operated by the City of Mt. Carroll and attended by staff at the city’s water treatment plant.

You can view the final report on the NCEI website here: https://www.ncdc.noaa.gov/extremes/scec/reports

A complete list of current state records can be found here:
https://www.ncdc.noaa.gov/extremes/scec/records/IL

This morning we had a brilliant display of airplane contrails, enough to significantly increase the cloudiness (as if we needed more cloudiness this winter). Despite rumors to the contrary, airplane contrails are just the byproducts of burning jet fuel at high altitudes where the air is very cold and dry. The basic chemistry involves combing a carbon-based fuel and oxygen to produce CO2 and water.  CH4 + 2O2 –> CO2 + 2H2O

It’s the same process you see on a cold morning with car exhaust. The water vapor exits the exhaust pipe and condenses when it hits the colder air temperature, resulting in a white fog.

There have been some studies (mentioned below) to suggest that airplane contrails can lead to regional increases in cloudiness over time. As a result, in certain regions the daytime highs may be lower and the nighttime lows higher. In other words, a reduction in the range of daily temperatures. END_OF_DOCUMENT_TOKEN_TO_BE_REPLACED

This semester a University of Illinois Department of Atmospheric Science student, Lauren Graham, worked to make available scanned images of the weather records for Fort Armstrong that cover the period 1820 to 1836. Fort Armstrong was located at the present-day Rock Island Arsenal. The original records were maintained and scanned by staff at the Rock Island Arsenal Museum.
These are the oldest official weather records that I have been able to find for Illinois. The records contain daily temperature readings taken at 7 am, 2 pm, and 9 pm, as well as comments on the weather. My favorite is a note in the first month about a “violent hurricane” on July 21 1820 (see image below). I’m sure it was not really a hurricane but either a tornado or severe thunderstorm with high winds.
Here is the press release of the story.
Here is the Fort Armstrong page containing the images and preliminary analysis.
The plans are to introduce more analysis of these data over the summer.