Frost is the formation of thin ice crystals on the ground or other surfaces in the form of scales, needles, feathers, or fans. If a frost period is severe enough to end the growing season or delay its beginning, it is referred to as a “killing frost.”

Frost in both spring and fall can be a concern to farmers, landscapers, and gardeners. However, we usually do not directly measure frost at weather stations in Illinois. Sometimes observers may note the presence of frost in their comments on the forms. To get around the lack of direct observations, we use a temperature threshold of 32° for frost and 28° for a hard freeze.

The maps represent the period of 1981 to 2010, to match the standard normals. The median represents the middle value in the range of dates and is less sensitive than the average to unusually early or late dates. It also fits better with the maps of the earliest, latest, 10th percentile (1 in 10 years), and 90th percentile (9 in 10 years), since the median is the 50th percentile.

The actual date varies from year to year. For tender plants, add two weeks to the average date in the spring to protect against the possibility of late season frost. In the fall, subtract two weeks from the average date to be on guard against an early frost.

Open, grassy areas are usually the first to experience frost, while areas under trees are more protected. Homeowners can protect plants by covering them when a frost is expected. Plants near heated buildings sometimes are spared too. Because of the abundance of warm buildings and trees, we see frost arrive in town a little later than in the countryside.

Although 32° is used to identify frost, visible frost can be seen on the ground and objects when the reported temperatures are slightly above 32°. On calm, clear nights, the cold, dense air collects near the ground. Under these conditions, the temperature near the ground can be a few degrees cooler than at the 5-foot height of the official National Weather Service temperature sensors.

Check with University of Illinois Extension for suggestions on dealing with frost. 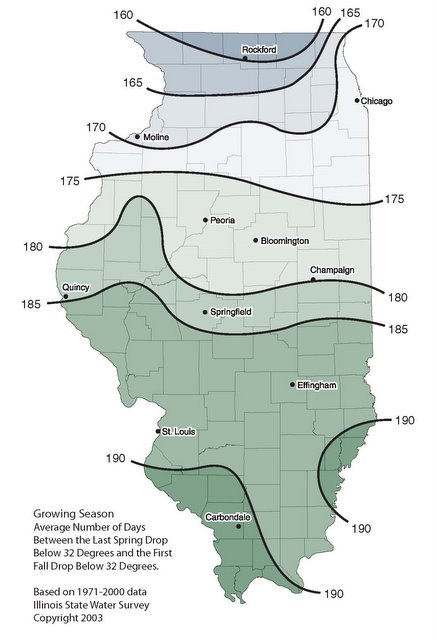