Now that 2019 is well underway, lets take a moment to reflect back on the climate averages and departures from 2018.

Note:  Data are provisional and may change slightly over time

2018 was a year marked with several climatologically dramatic temperature swings.  The chart below shows monthly temperature departures from the 1980 – 2010 long term average for Illinois.  The most noteworthy feature is the -7.8°F departure that occurred in April, ranking April 2018 as the second coldest April on record for the state (records extend back to 1895).  And with the turn of a calendar page, May saw a +8.0°F departure from the long term mean, ranking May 2018 as the warmest May in state history. 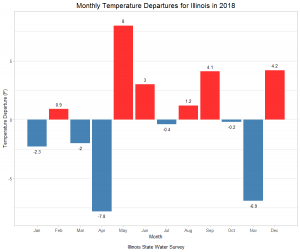 The plot below shows the average statewide temperature (F) by month for 2018, the colors represent meteorological seasons. 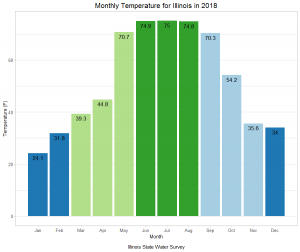 The map below shows spatially average temperature departures for the year 2018.   Despite several dramatic temperature swings throughout the seasons, the year as whole finished right around the long term mean statewide.  A few regions in the northwest were a degree below, and a few regions in the south/southeast were a degree above the long term mean. 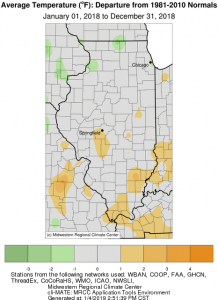 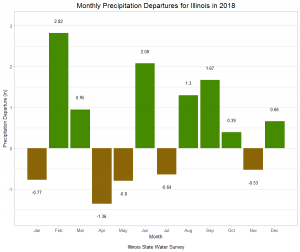 The plot below shows the average statewide precipitation (in) by month for 2018, the colors represent meteorological seasons. 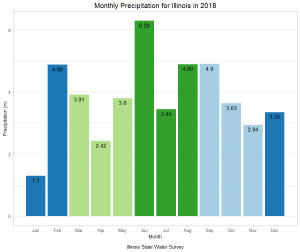 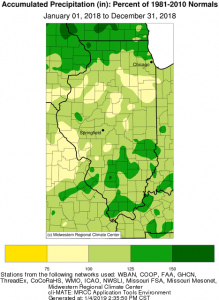 The statewide estimated average precipitation for 2018 stands at 45.75 inches which is an impressive 5.79  inches above the long term average.

Severe weather reports for Illinois in 2018 from the NOAA Storm Prediction Center. Note: It is possible to generate multiple report for the same storm/event