January 2019 will be a month remembered by an unseasonably warm start, followed by several cold air outbreaks and a torrent of winter storms that finally made it feel like January in the Midwest. The last two days of the month brought a monumental Arctic air outbreak that shattered many record cold temperatures across the state.

A National Oceanic and Atmospheric Administration (NOAA) cooperative (COOP) weather observer at Mt. Carroll (Carroll County) reported a temperature of -38°F  on the morning of January 31st.  This unofficial temperature is currently under review by the State Extremes Committee, and if confirmed with be a new state record.  The current record is -36°F recorded in Congerville (Woodford County) on January 5, 1999.

Preliminary results show that January 2019 finished with a statewide average temperature of 24.7°F which is -1.7°F degrees below the long term average.

January temperatures were a roller coaster over the course of the month, as depicted in the plot below, showing high and low temperatures and averages for Champaign-Urbana throughout the month.  Champaign-Urbana was chosen since the State Climate Office is located here, but this trend can be representative of the state as a whole. 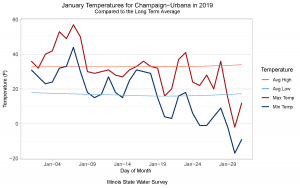 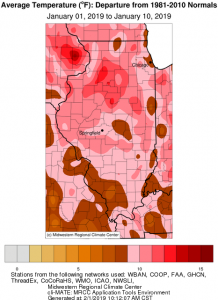 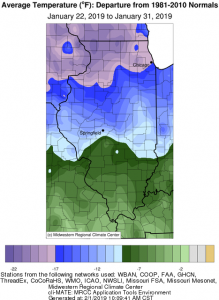 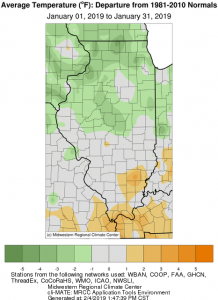 Preliminary statewide average precipitation for January was 3.51 inches, which is 1.44 inches above the long term average.

An active weather pattern beginning in the middle of the month allowed several large weather systems, and numerous smaller clipper type systems to traverse the state.  These storms were accompanied by heavy rains, accumulating snowfall, and sometimes icy precipitation.  The heaviest precipitation fell in the south/southwestern portion of the state where 5 to 6+ inches were measured (see first map below).  Many regions in Central and Northern Illinois received well over 100% of their average January precipitation, with Northwest Illinois receiving 200 to 300% (see second map below). 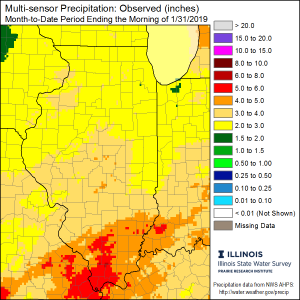 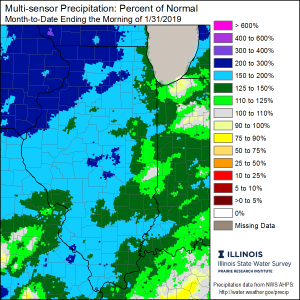 Snow was abundant across the state in January, with all of Illinois recording at least some accumulating snowfall.  The highest snowfall totals of 15 to over 20+ inches were common in West-central and Northwest Illinois (see map below). 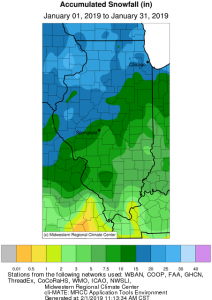 These same regions generally recorded accumulations on the order of 10 to 15+ inches above the long term average. 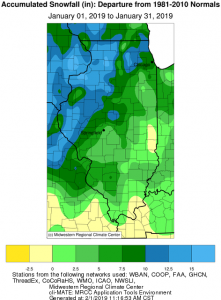 Ice cover on Lake Michigan increased to nearly 35% by the end of the month, according to data from the Great Lakes Environmental Research Laboratory (chart below).

Looking ahead at the rest of February 2019, the Climate Prediction Center is forecasting an above normal chance for a wetter than average February statewide. The highest probabilities are located toward the eastern side of Illinois.  Below average temperatures are favored for much of Central and Northern Illinois, with no strong signal further south. 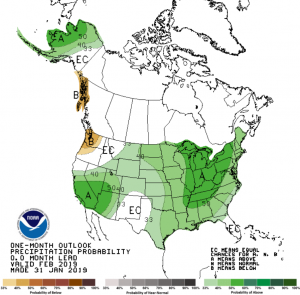 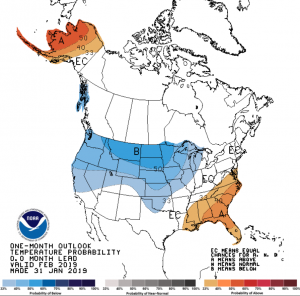