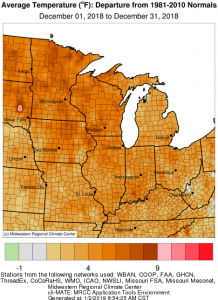 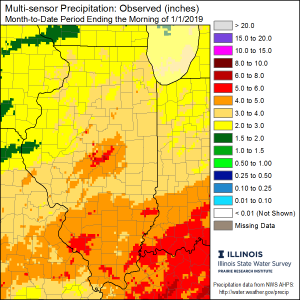 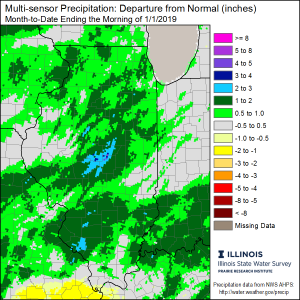 December was not an ideal month for snow lovers as warmer temperatures, and a combination of environmental factors kept December snow accumulation to a minimum.  The highest accumulations were in the northeast, and in central/west central portions of the state –  where a quick moving cold front brought a majority of the snow accumulation during the first week of December. Total snow accumulations are shown in the map below. 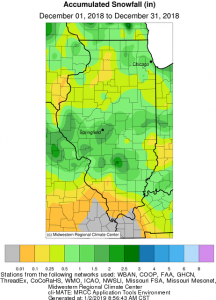 The National Weather Service confirmed 29 tornadoes across Illinois during the December 1st tornado outbreak, ranking this as the largest December outbreak in state history.  The previous three largest outbreaks are listed below:

Most notable was the Taylorsville Tornado in Christian County.  This tornado had a path width over 1/2 mile wide, and estimated wind speeds of 155 mph, ranking it as an EF-3 on the Enhanced Fujita Scale, The Taylorsville tornado caused major damage to 100 homes, and 22 reported injuries.

The map below, from the Storm Prediction Center, pinpoints locations of all severe weather reports from 12/1/2018.  It is evident that the worst of the severe weather, and tornadoes, were confined to west central Illinois. 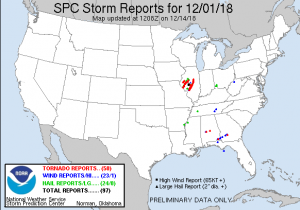 In total, 52 severe weather reports were recorded for Illinois this December; 34 reports for tornadoes, 11 for severe hail, and 7 for severe wind.  Note:  It is possible for multiple reports to be created for the same event/storm.

Check out the Twitter link from Kevin Lightly, capturing aerial images of damage in Taylorsville the day after the tornado outbreak:

Looking ahead at the rest of January 2019, the Climate Prediction Center is forecasting an above normal chance for a drier than average January for a majority of the state. The highest probabilities are centered over northern Illinois and the Great Lakes.  Focusing on temperatures, the highest probabilities for above average temperatures are concentrated over the upper Midwest and North Dakota, with a smaller probability extending into northwest Illinois.

Be sure to check back in the coming week for the ‘Illinois 2018 Climate and Weather Recap’ blog entry.