First of all, is it really July 19th already?  As a kid I remember summers lasting almost forever, now it seems to last about two weeks.  I feel cheated.
July: So far, the statewide average temperature for July is 77.4 degrees, 1.5 degrees above normal.  The statewide average precipitation is 1.94 inches, 93 percent of normal.  Strangely, the interior of the state is experiencing near to above-normal precipitation while the edges have experienced below-normal precipitation (map below). 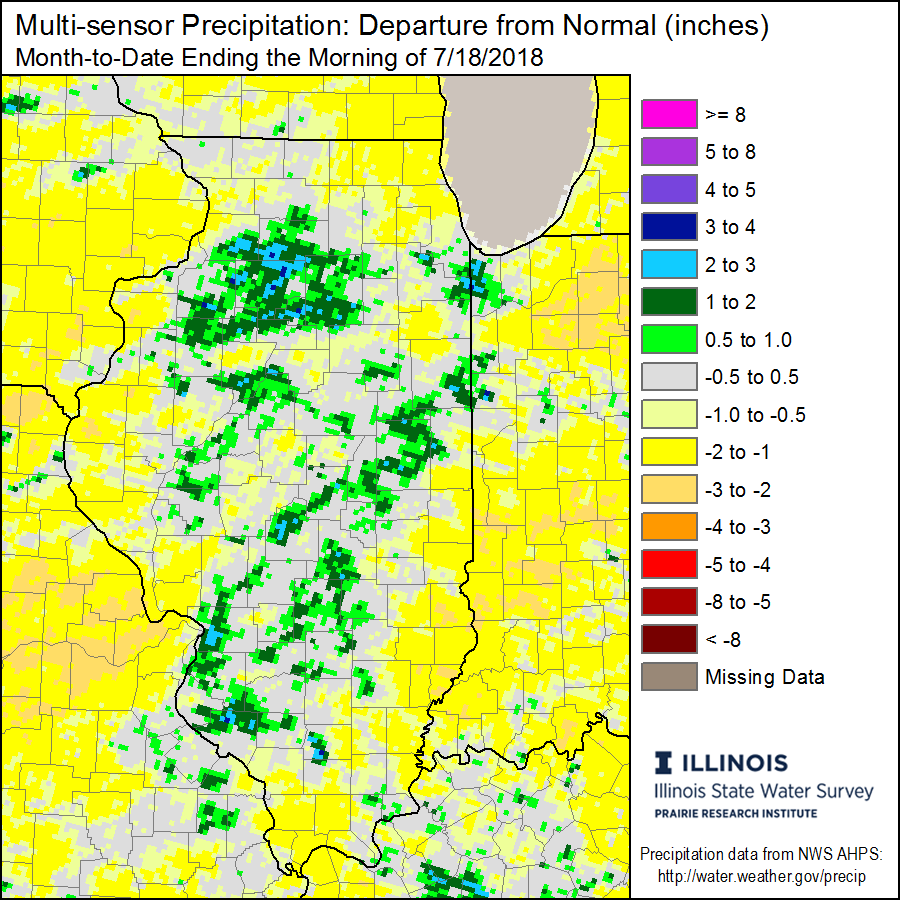 NWS Outlooks: The NWS has released their outlooks for August and beyond.  The big news is the possible return of El Niño. While conditions are currently neutral in the Pacific Ocean, the chance for El Niño increases to about 65 percent in the fall, and to about 70 percent during this winter. As a rule of thumb, warmer than normal temperatures are expected in winter during strong El Niño events.
August
The outlook for August in Illinois is for an increased chance of being warmer than normal while precipitation has equal chances of being above, below, or near-normal. The term “equal chances” means that there is no climate factors driving the conditions in one direction or another. While it’s not strictly true to call it a forecast for near-normal conditions, that is probably the best solution in these instances. For an idea of what normal temperatures and precipitation for August looks like, check out the climate normals page.  In climatology, the word “normal” refers specifically to 30-year averages updated every 10 years.


August-September-October
The outlook for August-September-October in Illinois is for an increased chance of being warmer than normal. Southwestern Illinois has an increased chance of being drier than normal, while the rest of the state has equal chances of being above, below, or near-normal.  Notice how the outlooks are nearly identical to the August outlook.