A large, slow-moving winter storm has dropped considerable rainfall across Illinois in the last few days. Here is the map of the amounts in the last 7 days, through this morning (12/28). Areas in shades of red are 5 to 8 inches, and follow Interstate 70 across Illinois. Areas in shades of yellow to light brown are 2 to 5 inches. I’ll post more when the rain finally ends. 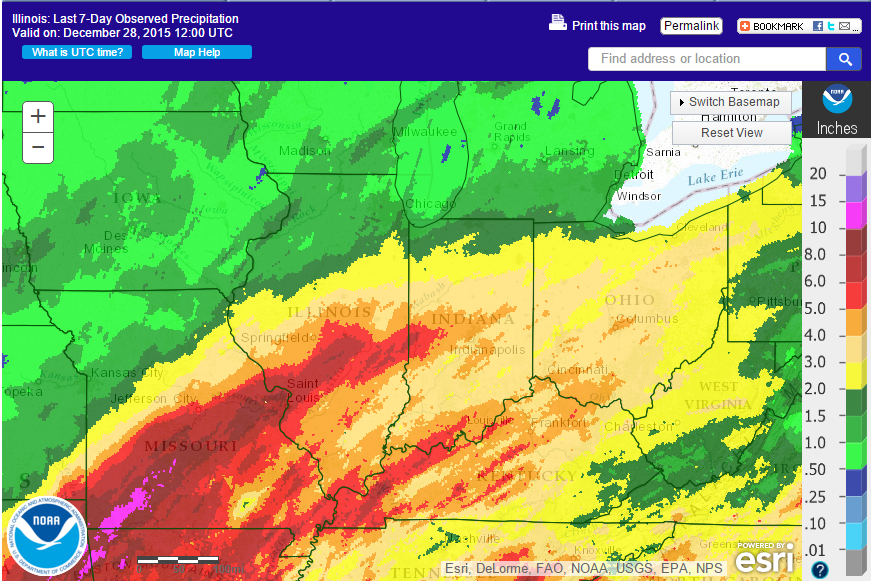 And it’s still raining. There is the potential for another 0.75 to 1.25 inches expected in southern and central Illinois. Another 1.25 to 1.75 inches is expected in parts of northern and western Illinois before this system moves on.

Is this El Niño?

This December is already the 8th wettest with 4.6 inches. Another inch of rain statewide, based on the forecast, would make it the 2nd wettest on record.

Perhaps the biggest contribution of the current El Niño to this low-pressure system is that it has been tracking through a much warmer and more moist environment than is usual for late December. Temperatures in Illinois have been 17 degrees above average in the last 7 days. It reminds me more of a typical March or April storm system in its nature. As a result, for Illinois the system has produced all rain and lots of it.