Following a warmer than average December, temperatures remained persistently above average for the first half of January, with only a short cold air incursion between Jan. 15 and 23. January average temperatures ranged from the mid-20s in northern Illinois to the high 30s in southern Illinois, and were 2 to 7 degrees above average across the state. 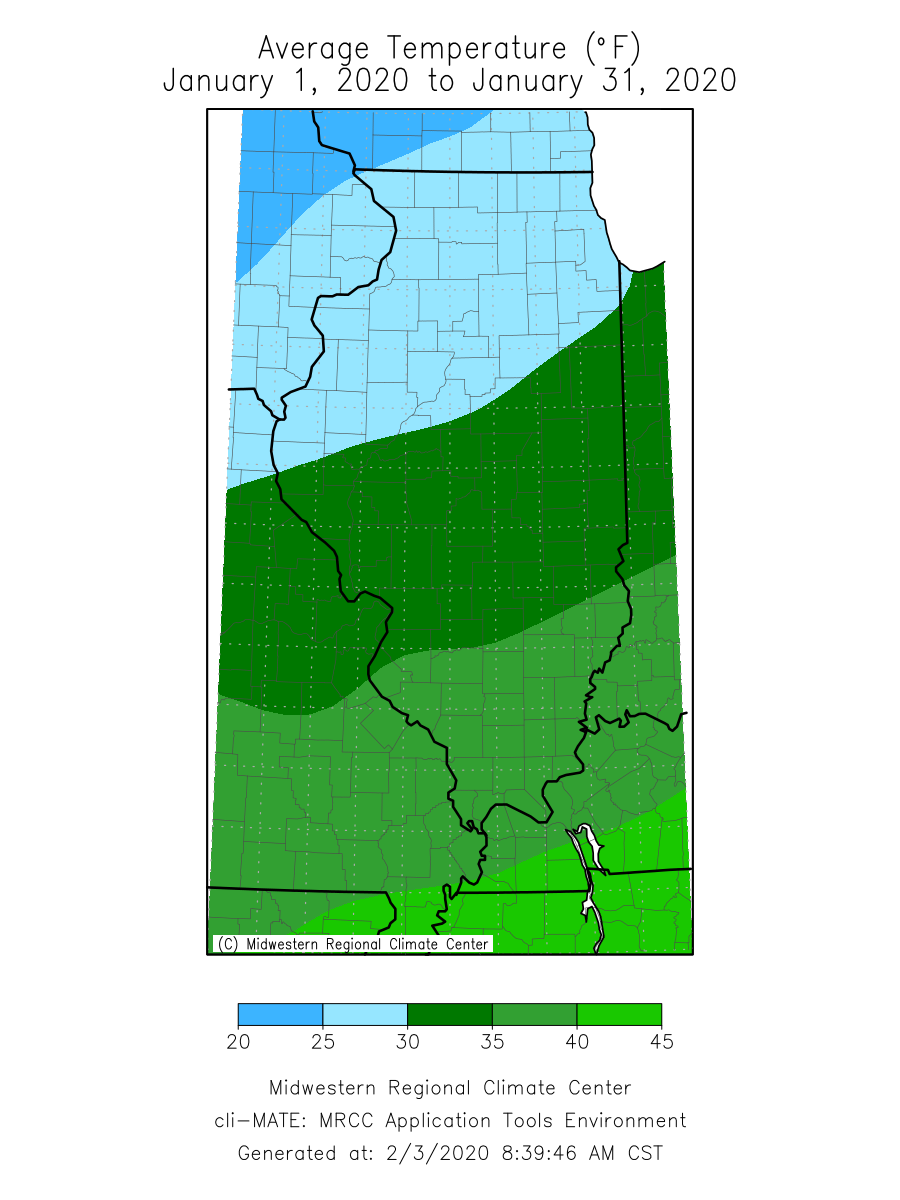 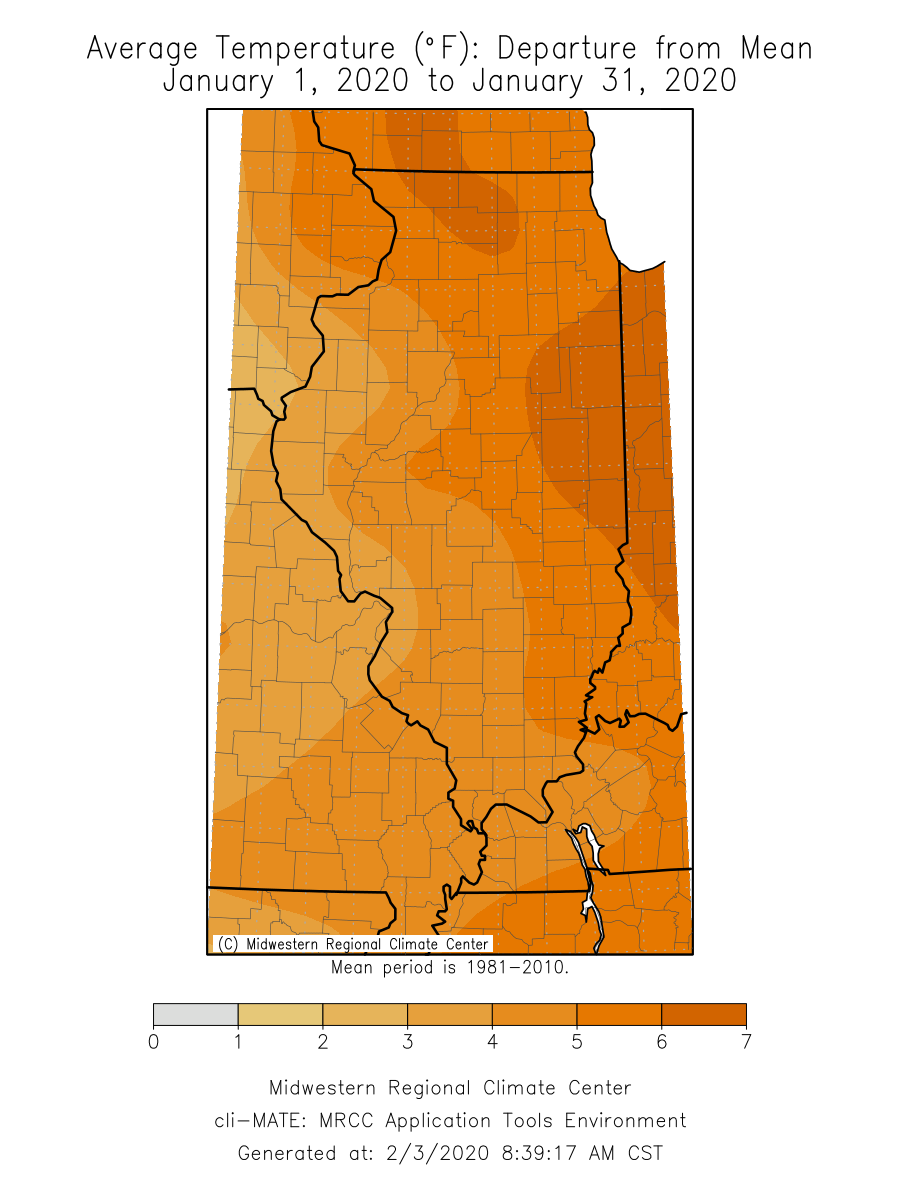 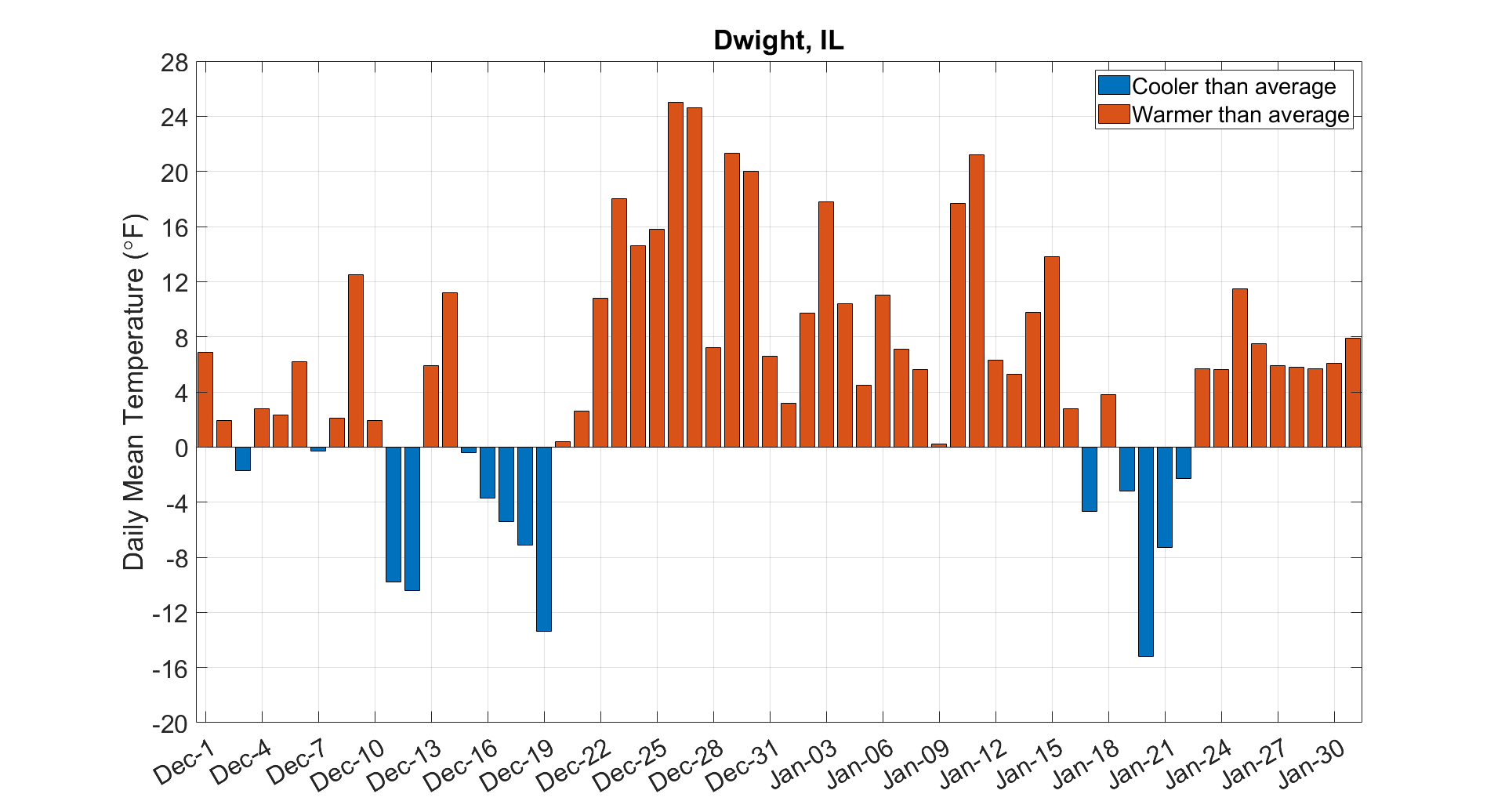 Temperatures since the start of meteorological winter on Dec. 1 are 2 to 7 degrees above the long-term average across the state. As an example, this winter through Feb. 2 is the 4th warmest on record in Moline with an average temperature of 31.1 degrees.  The three winters that were warmer through Feb. 2 in Moline are 2002, 2012, and 2016.

Warmer conditions have helped make for a mild winter so far across the southern half of the Midwest, as indicated by the Accumulated Winter Season Severity Index (AWSSI). AWSSI uses a daily accumulation of points, based largely on temperature, to characterize winter season severity. Despite an early snowfall this season, all AWSSI-monitoring stations in Illinois indicate a mild or moderate winter season so far (see map below). AWSSI data and maps are created by the Midwestern Regional Climate Center (https://mrcc.illinois.edu/research/awssi/indexAwssi.jsp).

A Few Days Make for a Wet January

January total precipitation was above normal across the state, with monthly precipitation totals ranging from 2 inches in northwestern Illinois to nearly 8 inches in south-central Illinois. The highest accumulation was along the Interstate 70 corridor between the St. Louis Metro East and Effingham. This region experienced nearly 300 percent of its average January total precipitation. Vandalia in Fayette County experienced its third wettest January on record with 7.99 inches, over 5 inches above the long-term average. As with most of the wettest parts of the state, Vandalia received 85 percent of its total January precipitation in just three days. Much of this was the result of a single winter storm that moved through the Midwest between Jan. 9 and 12. 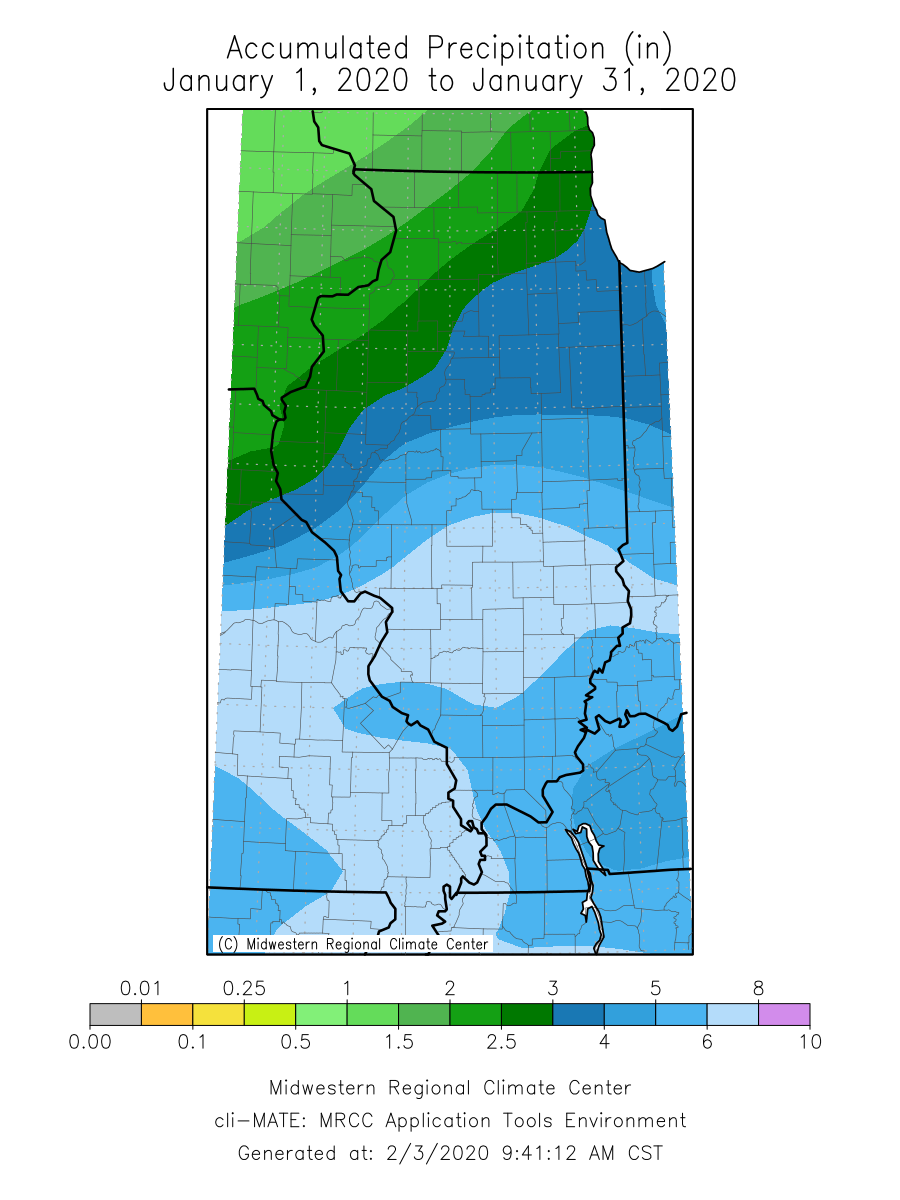 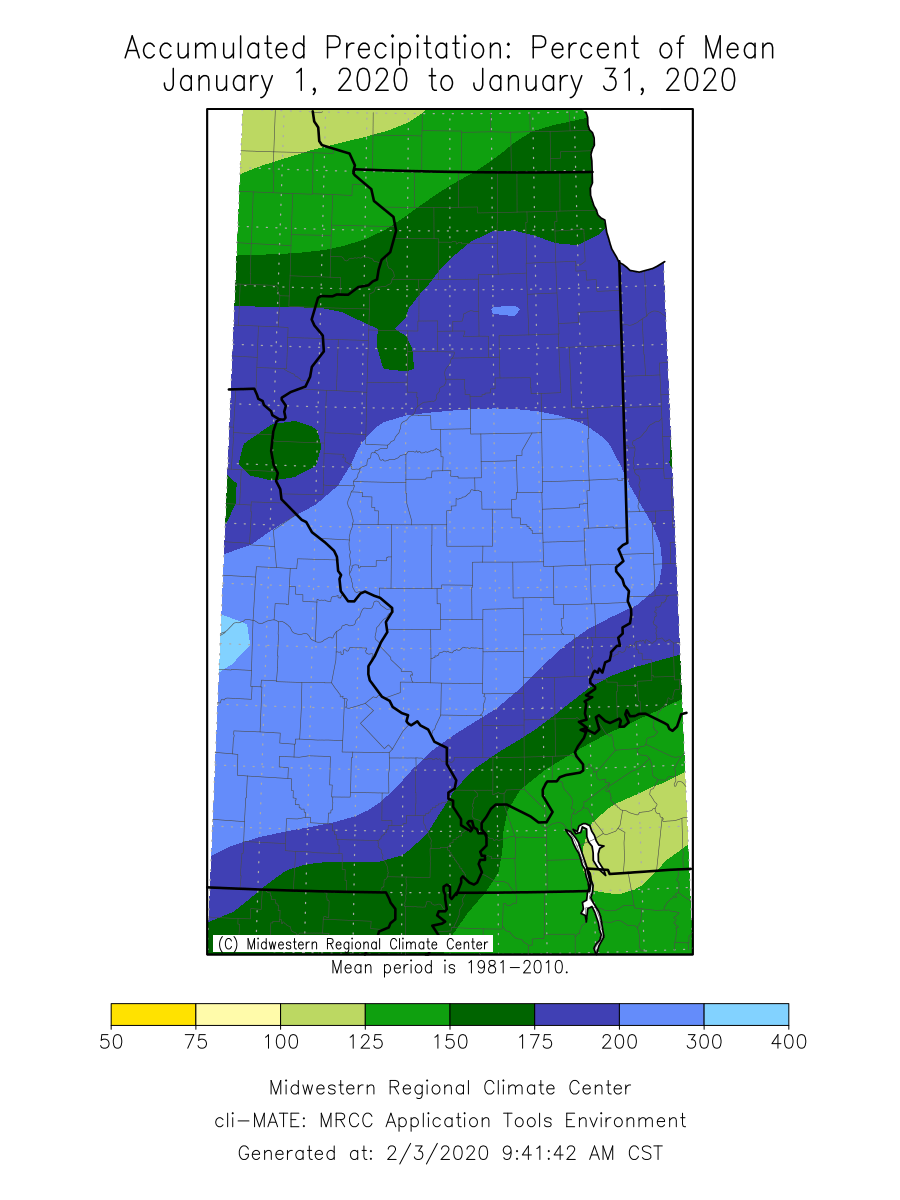 Total precipitation between Jan. 10 and 12 broke three-day total January precipitation records at Charleston (5.85 inches), Taylorville (4.35 inches), Champaign (3.63 inches), and Marseilles (3.41 inches). This event resulted in flooding along many of Illinois’ larger rivers, including the Kaskaskia River breaking through the Vandalia levee and causing a temporary closure of highway 51. Rivers crested between 24 and 72 hours after the precipitation ended. As of the end of the month, minor flooding persisted in only the lower Illinois and Kaskaskia Rivers in the state (see map below). 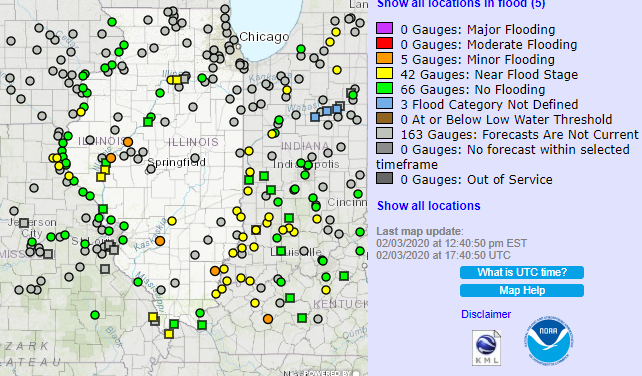 Snowfall totals this last month ranged from less than a tenth of an inch in southern Illinois to over 12 inches in northwestern Illinois. There was a strong southeast-to-northwest January snowfall gradient across the state, resulting from a similar gradient in air temperature. The highest January snowfall total was 15 inches in both Stephenson and Bureau Counties. Rockford experienced the highest 1-day snowfall maximum across the state with 6 inches on Jan. 25. 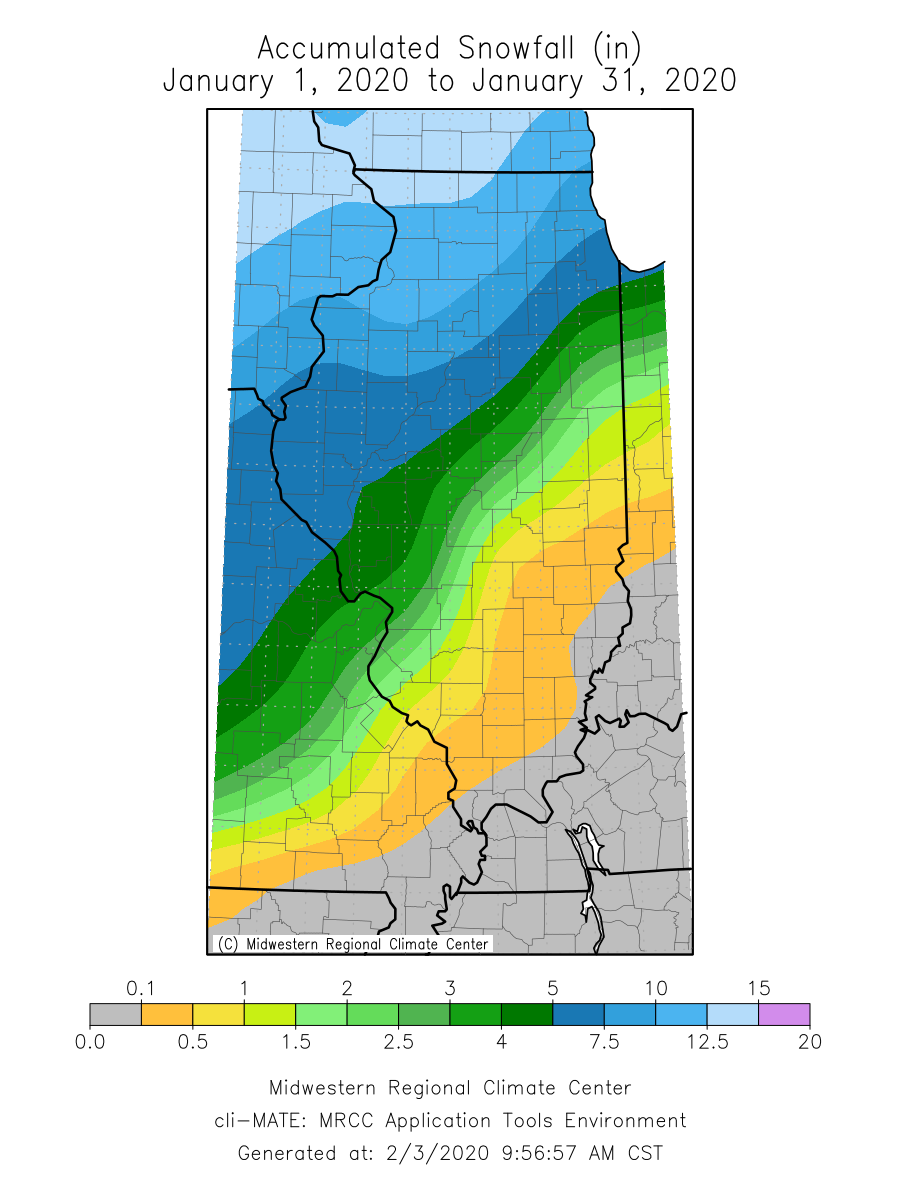 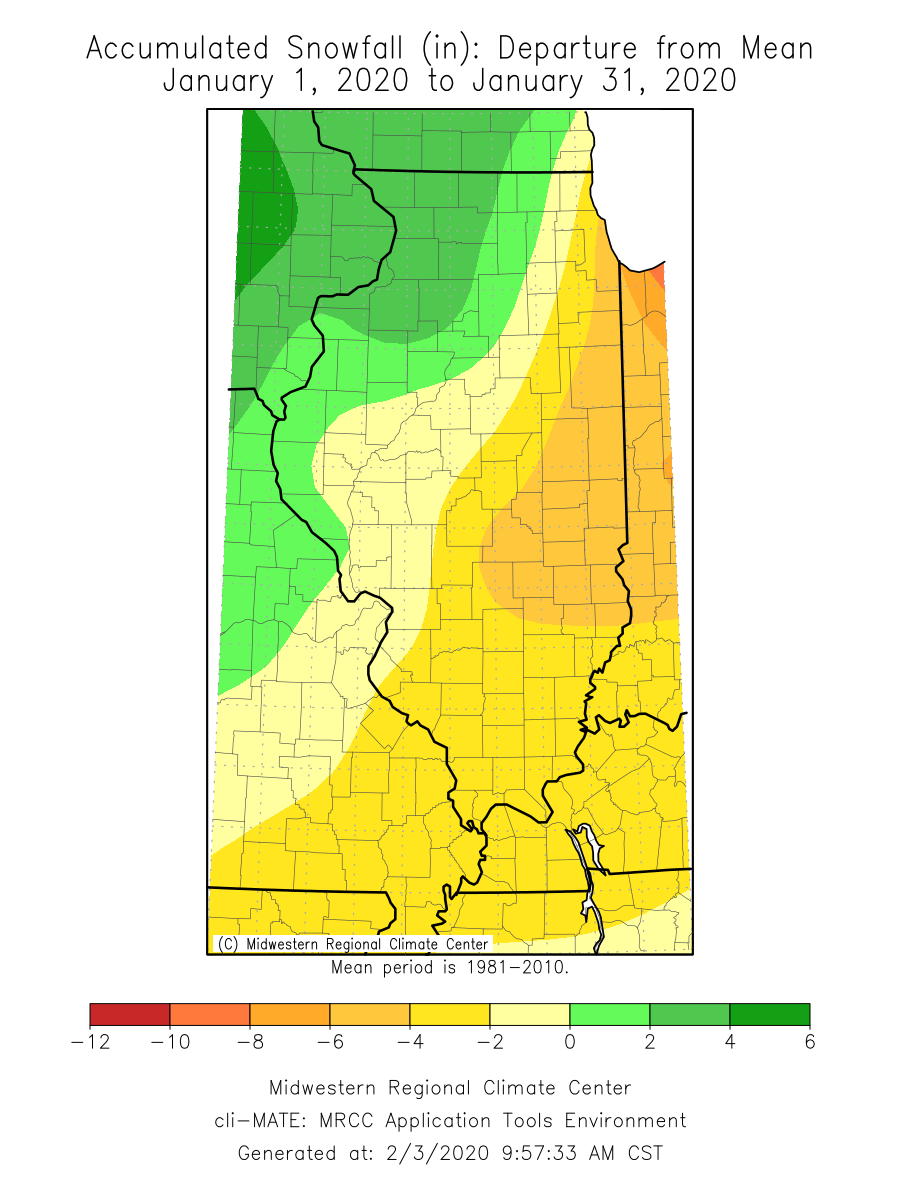 As is often the case, Illinois spans the continuum of conditions in the Midwest. Most areas northwest of us have experienced well above normal snowfall where areas to the southeast are in a snowfall deficit. In particular a region spanning the Dakotas to the Upper Peninsula of Michigan have experienced well above normal snowfall this winter season. Two CoCoRaHS stations in the Upper Peninsula have recorded over 210 inches of snowfall since Oct. 1. Heavy snowpack in the Upper Midwest (see map below) can often exacerbate unusually wet conditions in early to mid-spring here in Illinois, especially if a brief warm spell and/or heavy rain causes rapid snowmelt. Therefore Upper Midwest snowpack is an important variable to consider when planning for potential flooding-related impacts in the spring. 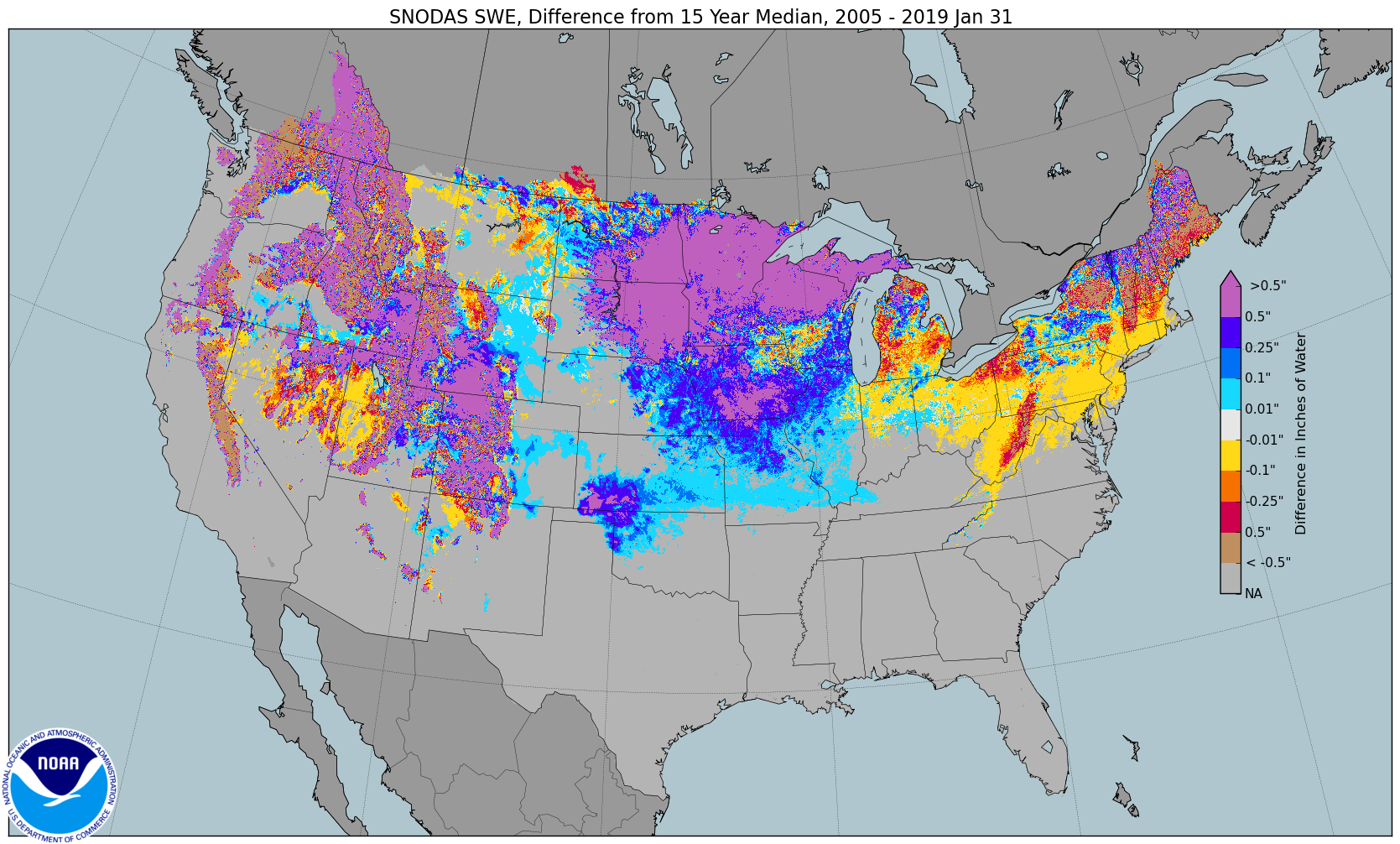 Short-term 8–14-day outlooks from the NOAA Climate Prediction Center show strongly elevated odds of above normal precipitation, with the highest probabilities across the southern two-thirds of the state. Short-term temperature outlooks show slightly elevated odds for a continuation of above normal temperatures across the eastern part of the state.