February was slightly warmer and wetter than average across Illinois, bringing an end to a very warm climatological winter season. The preliminary statewide average February temperature was 31.2 degrees, 0.30 degrees above the 30-year normal and tied for 42nd warmest on record. Preliminary statewide average total precipitation for February was 2.13 inches, 0.07 inches wetter than the 30-year normal and tied for 46th wettest on record. 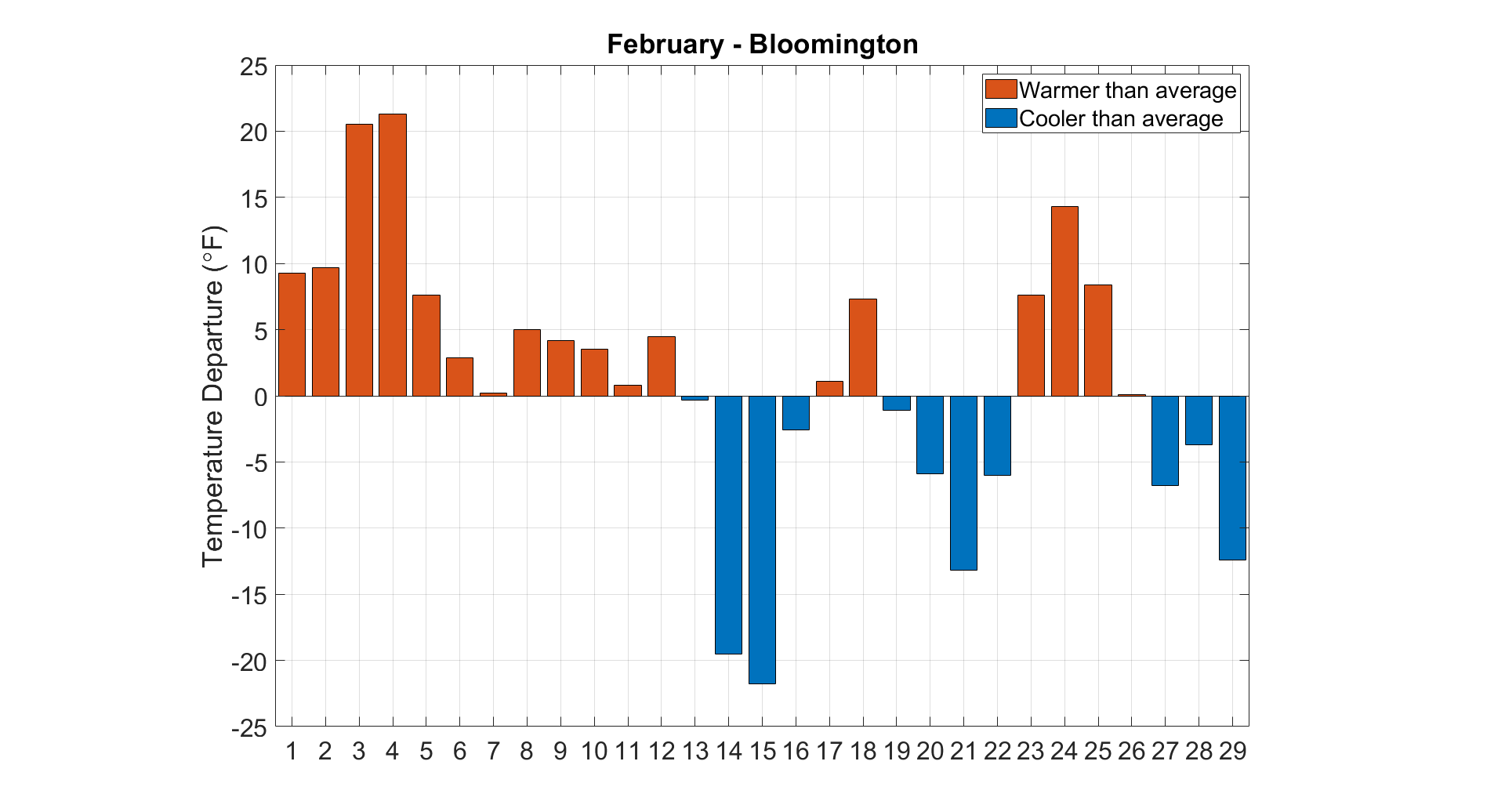 Average temperatures in February ranged from the high teens in northwestern Illinois to the high 30s in southern Illinois. Average temperatures ranged within a degree of the long-term average for all but a southeast sliver of the state. The statewide average February temperature was 31.2 degrees, which is 0.30 degrees above the 30-year normal and tied for 42nd warmest on record. 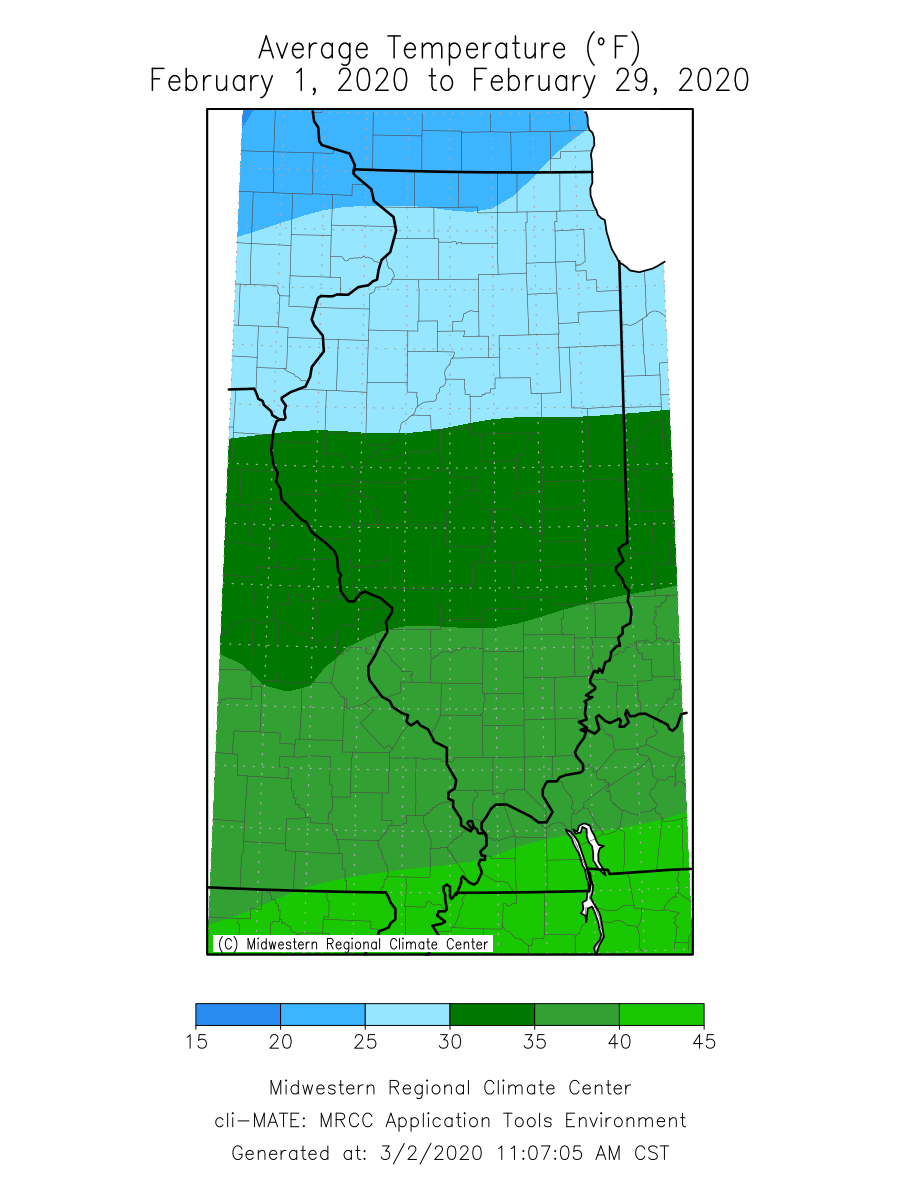 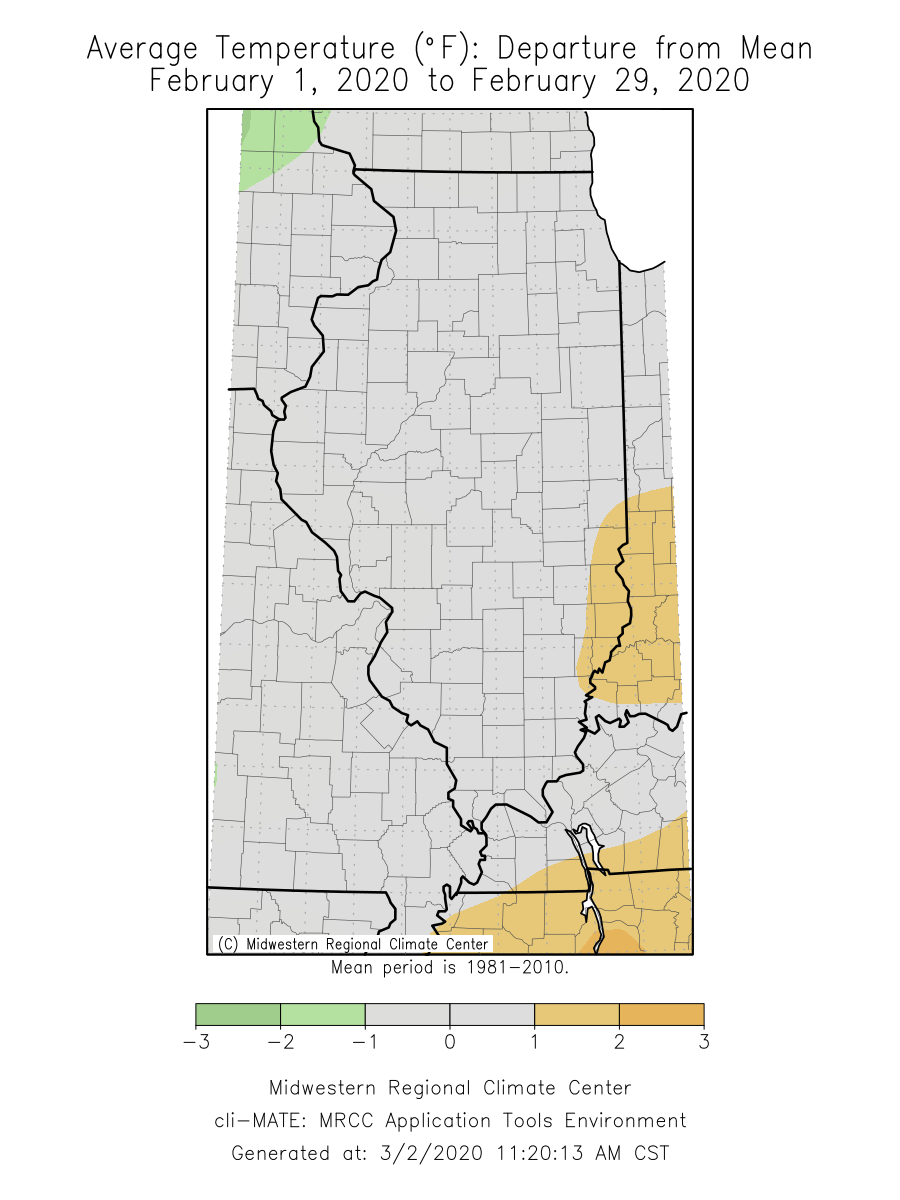 An End to a Very Warm Winter Season

February brought an end to climatological winter, which will be best known for persistently warmer than average weather. The preliminary December to February statewide average temperature was 32.6 degrees, which would result in this being the 12th warmest climatological winter season on record in Illinois.

This was the driest February on record at Gladstone Dam in Henderson County, with only 0.04 inches of precipitation recorded, despite the extra February day this leap year. The wettest place in the state last month was Cairo in Alexander County, with 7.34 inches total precipitation. 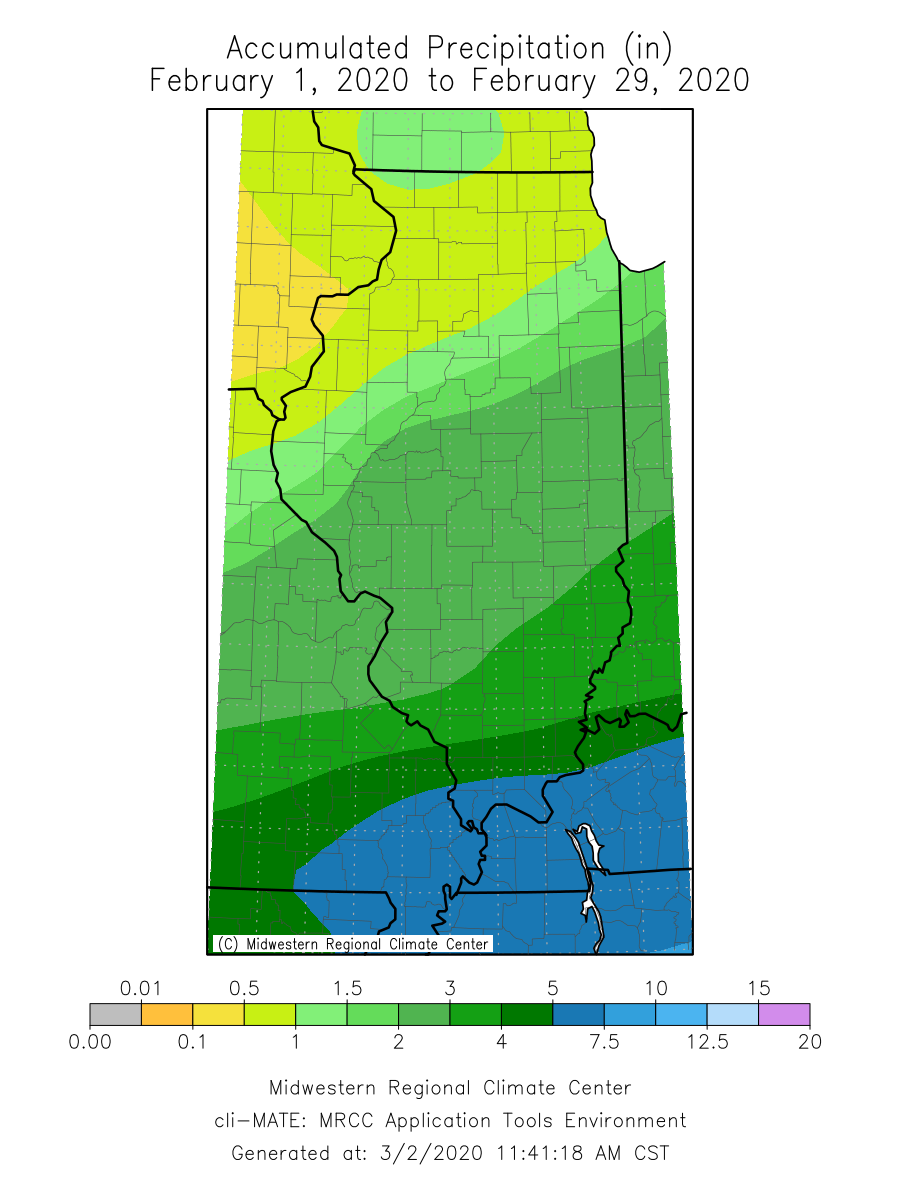 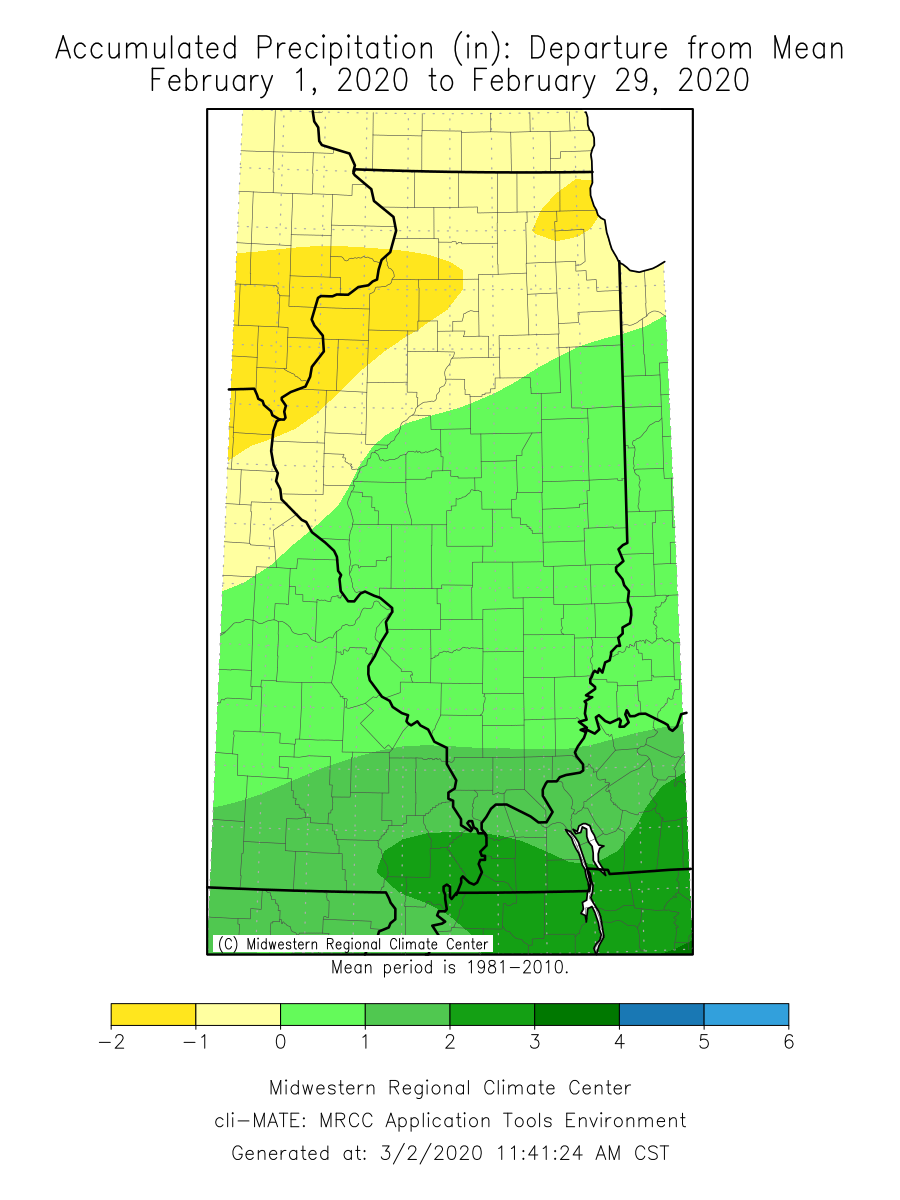 While southern Illinois was experiencing persistent rain, most of northern Illinois was treated to abundant snowfall in February. Snowfall totals from last month ranged from just over 15 inches in Kane County to less than an inch along Interstate 70. Thanks to a mid-month storm, a small area of Mason, Cass, and Menard counties received 6 to 8 inches more than average snowfall in February, whereas most of the rest of the state north of Interstate 70 received near average to just a couple of inches above average snowfall last month. 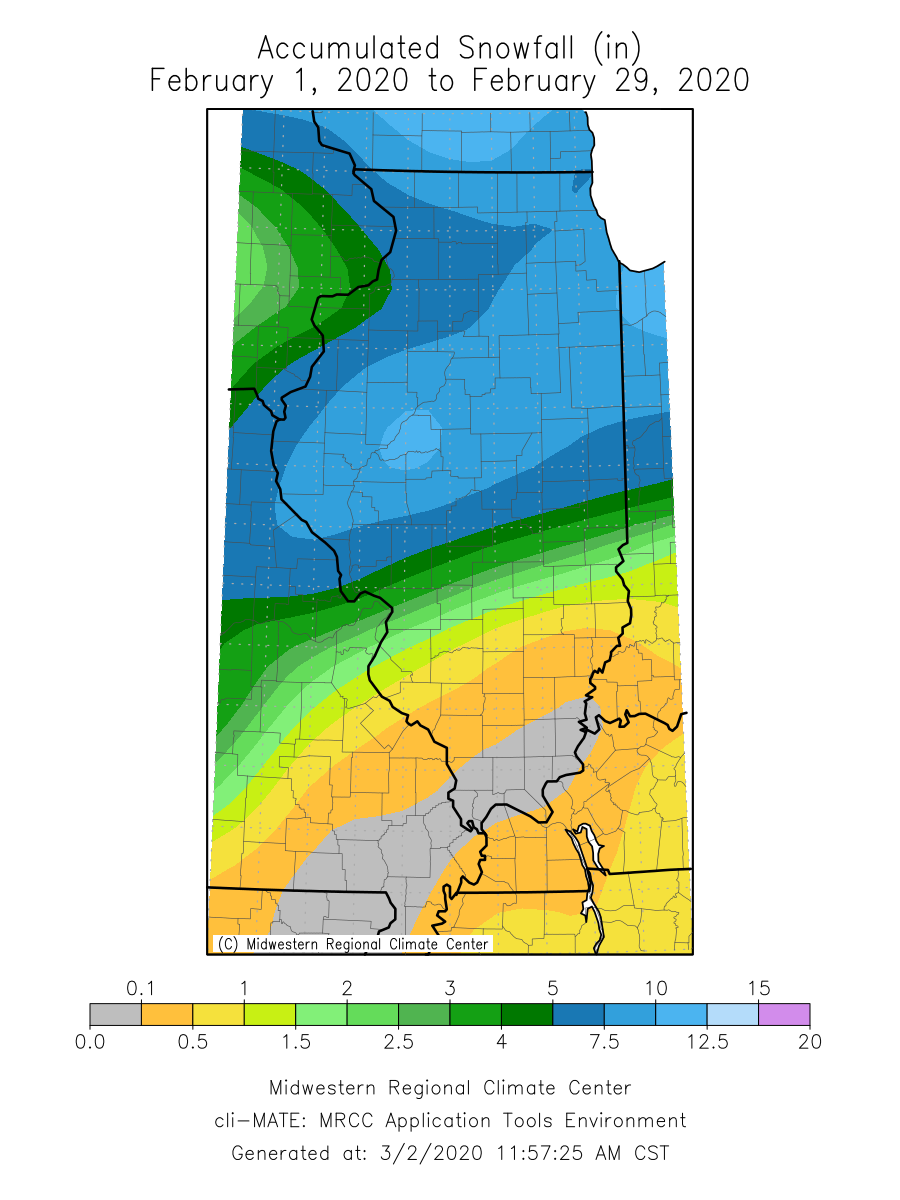 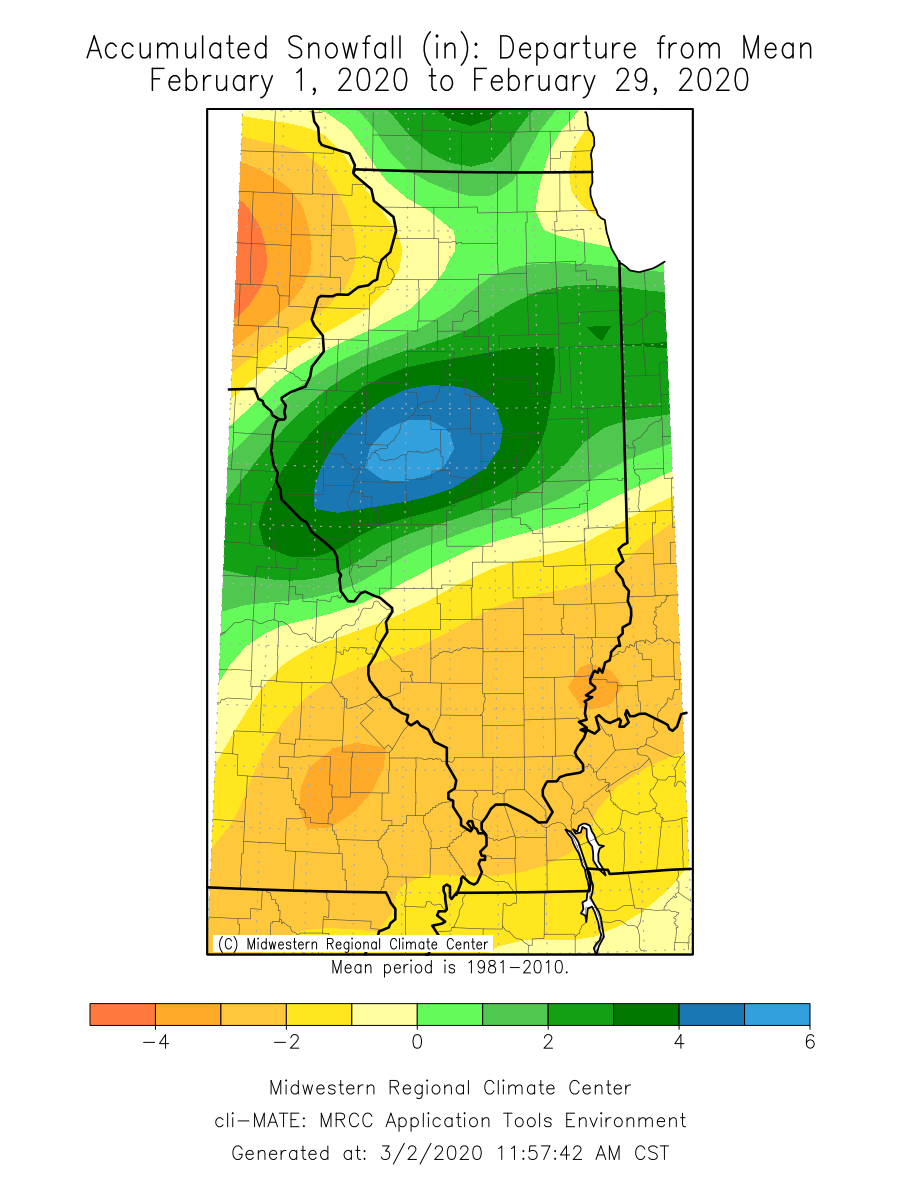 Snowfall totals over the climatological winter season (December–February) are within 5 inches of the long-term average for most of the central and western portions of the state, while a snowfall deficit exists along the Indiana border and for most of southern Illinois. The largest departures from average are in the Chicagoland area, where winter season snowfall has been 15 to 20 inches less than average. 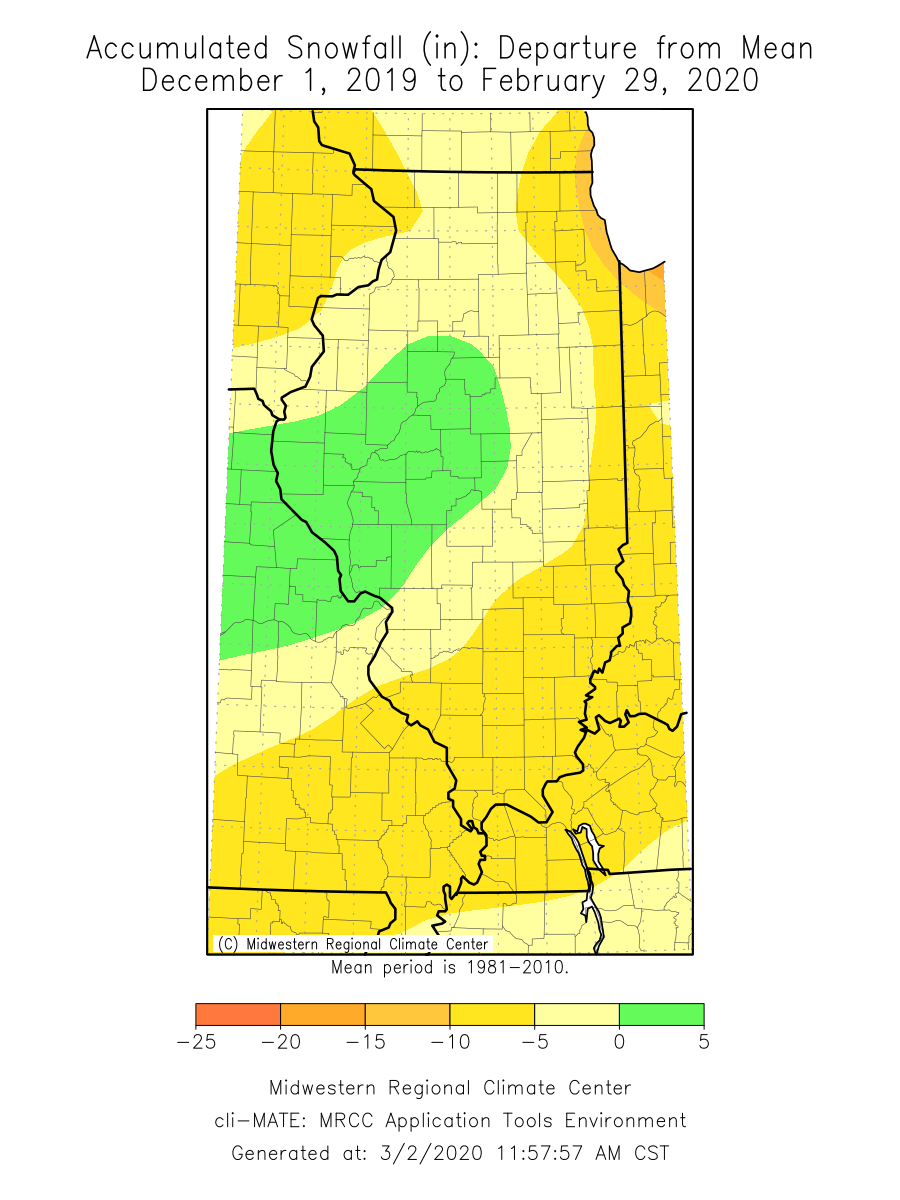 Short-term 8- to 14-day outlooks from the NOAA Climate Prediction Center show strongly elevated odds of both above normal precipitation and above normal temperatures across the state.

Spring flooding outlooks from the National Weather Service continue to show above normal to much above normal risks of flooding in the Mississippi River Basin, including 473 gauges with a 50 percent or greater chance of flooding between March and May (see below). Most gauges along the Mississippi River in Illinois have a 50 percent or greater chance of major flooding this spring, with gauges along the Illinois, Kaskaskia, Wabash, and lower Ohio rivers having a similar chance of minor to moderate flooding before May. 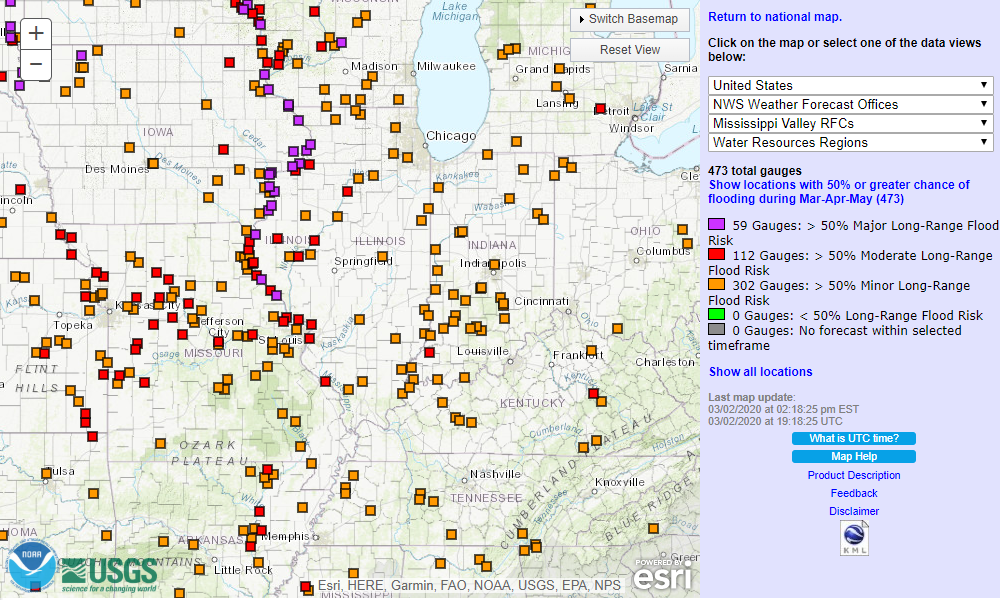 The elevated flood risk is due to: (1) very wet soils across the entire region; (2) large snowpack in the Upper Midwest; and (3) outlooks for a wetter than normal climatological spring season. For those wanting more information related to current hydrologic conditions and/or spring flood outlooks, I have included links to relevant partners and information below.