April 2019 will be a month remembered for a continuation of an active and stormy weather pattern across Illinois, with two short lived, yet notable and uncommon late season snow events which impacted many in northern portions of the state.

Note: Data are provisional and may change slightly over time.

Preliminary statewide average precipitation for April was 4.58 inches, which is 0.80 inches above the long term average.

Precipitation in Illinois has been above average since December 2018. Preliminary data would rank this as the 7th wettest December – April period in state history. The end of April 2019 marked six months since any portion of the state has been classified as in drought, or abnormally dry by the U.S Drought Monitor..

An active spring weather pattern resulted in a majority of regions in northern, eastern, and southern portions of the state receiving over 100% of average monthly precipitation, with localized amounts approaching 200%.  Smaller regions of the state in west-central Illinois – roughly between the Mississippi and Illinois rivers are the only locations to receive near or below average precipitation for the month (see map below). 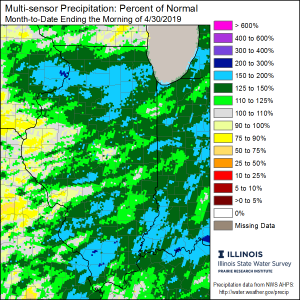 The heaviest precipitation fell in extreme southern Illinois, especially in counties bordering the Wabash and Mississippi Rivers, where 6 to 8+ inches were common (see map below).  The highest total in the state was reported at a station near Cobden (Union County) with 8.31 inches. 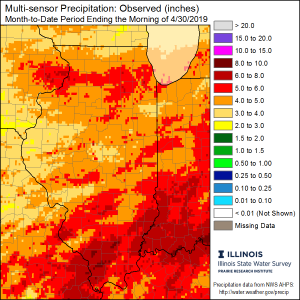 Heading into May, flooding remains an ongoing concern for the state, as soil moisture percentiles remain in the 90th to 95th percent range.

As of April 30th, 134 river gauges affecting Illinois were reported with crests in minor, moderate, or major flood stages. The greatest threat continues to remain along the Mississippi River. River flooding concerns were intensified by several days or heavy rains during the last week of April. 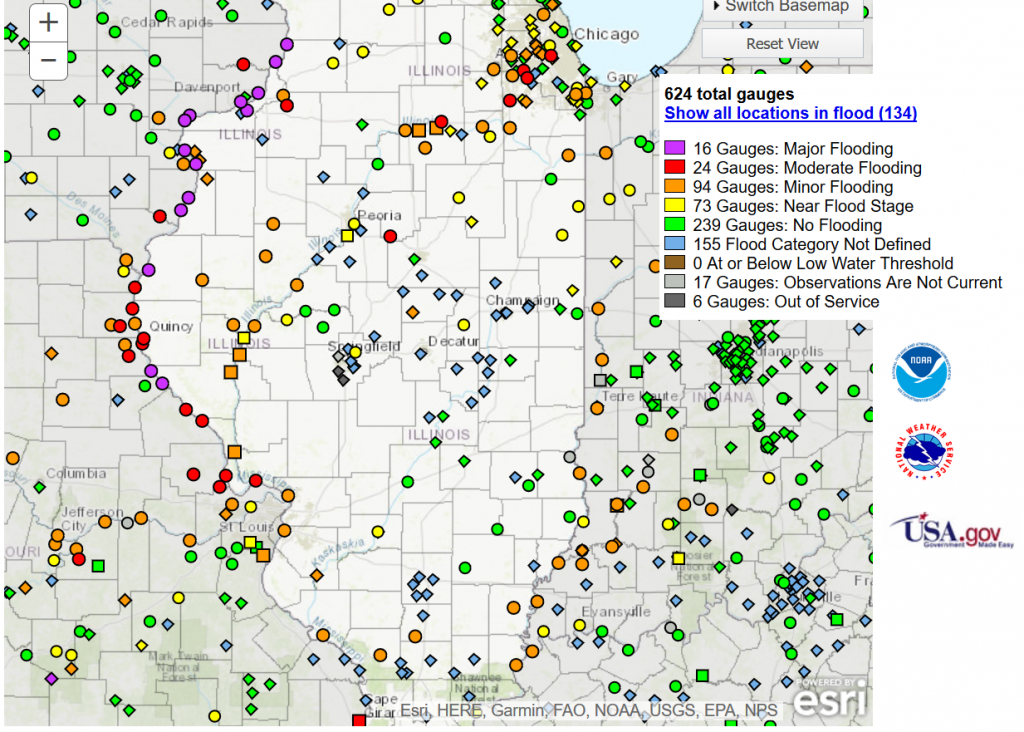 A majority of April snowfall came from two short lived, yet notable late season events that impacted many in northern portions of the state.

The first event on the weekend of April 13th and 14th brought widespread reports of 1 to 5 inches along a corridor extending from near Quincy, and running northeast toward Chicago and the Illinois/Wisconsin border. Several localities west and north of Chicago reported 6 to 8+ inches. Notable accumulations were measured as far south as Peoria. An accumulation of 5.4 inches at Chicago O’Hare Airport tied the record for the snowiest calendar day this late in the season.  April 16, 1961 also recorded 5.4 inches of snow.

The second snow event on April 27th brought a variety of wintry precipitation types to locations in northern Illinois, including another round of accumulating snow for many from Chicago and points north and west.  With 3.7 inches, this was the latest 2+ inch snow event on record for Rockford (Winnebago County).

The maximum monthly snowfall in Illinois was reported at a station near St. Charles (Kane County) with an impressive 13.5 inches. 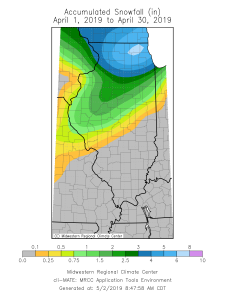 Preliminary results show that April 2019 finished with a statewide average temperature of 52.0°F which is 0.6°F below the long term average.

Despite several significant temperature swings throughout the month, which are common during springtime, statewide April temperatures finished right around the long term average. A few pockets in extreme southern Illinois reported slightly above average, and sporadic regions in northern Illinois reported slightly below the long term average.  This is a welcome change from last year,  April 2018, which ranked as the second coldest April on record. 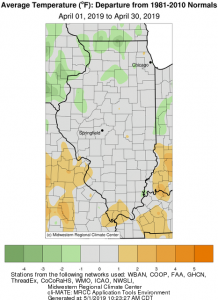 Looking ahead at the rest of May 2019, the Climate Prediction Center (CPC) is favoring probabilities of above average temperatures for the southeast half of the state, with equal chances of above, near, or below average temperatures for the northwest half of the state. Unfortunately, an active weather pattern looks to persist, as the May outlook favors probabilities of above average precipitation statewide. 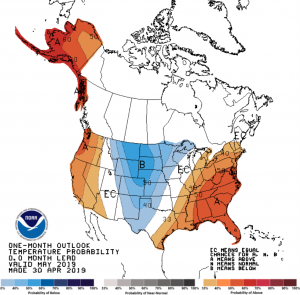 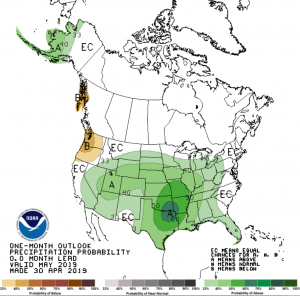