According to the National Hurricane Center, what’s left of Subtropical Storm Alberto will reach Illinois on Wednesday, bringing widespread rain to areas that are driest in the state. By the time it reaches Illinois, it will have weakened considerably with the greatest risk from flooding instead of high winds. Here is the projected path: 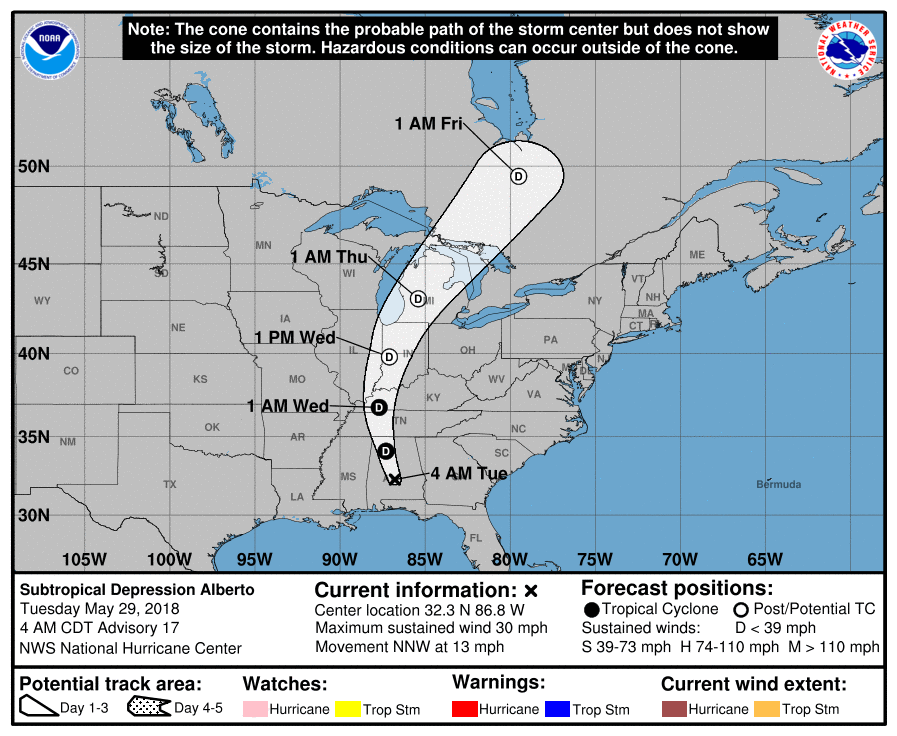 And here are the projected rainfall totals for the next three days with possible totals of 2 to 4 inches in the southern third of Illinois and the risk for flash flooding in some areas, according to the NWS. Meanwhile, much of rest of the state could see amounts between 0.5 to 1.5 inches. The impact in western Illinois will be minimal.

This rainfall could be welcome in southeastern Illinois, which has been exceptionally dry in May. Here is the rainfall deficit map for May so far, showing some areas 2 to 4 inches below normal (1981-2010 average). If the forecast comes true, much of that deficit will be erased. Hopefully, the rains will fall slowly enough to soak in and help soil moisture. That has been the case in past situations such as Hurricane Isaac in 2012. 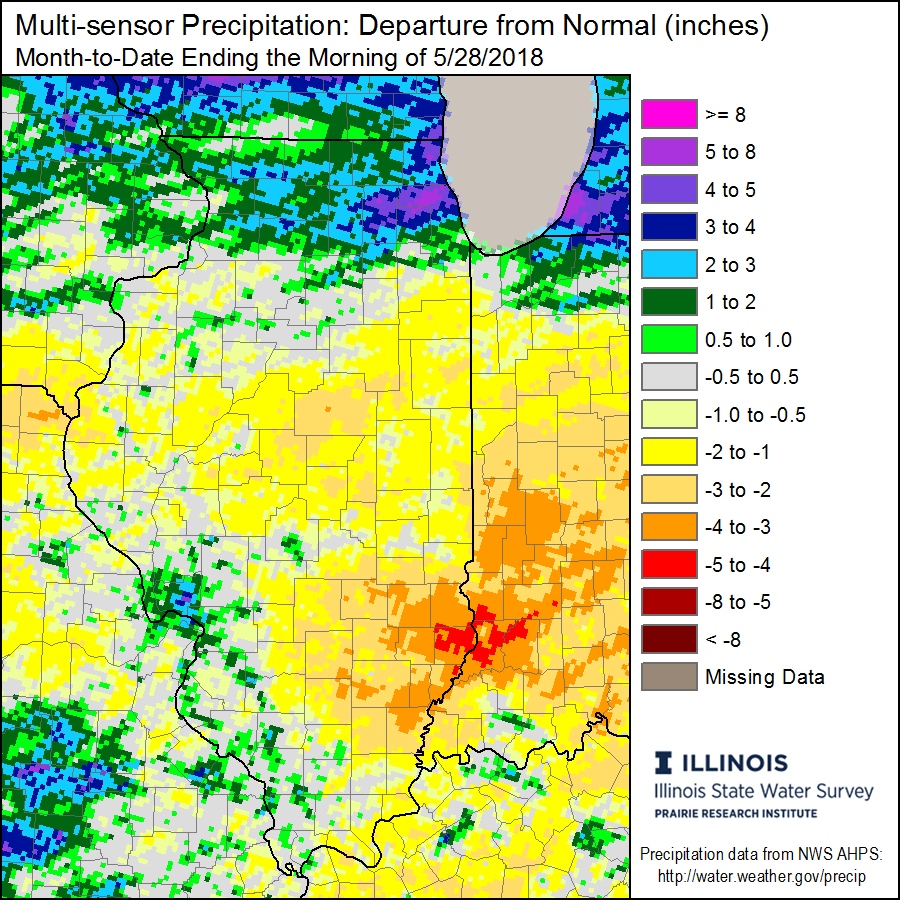 It is not that unusual for systems like this to reach Illinois and actually provide welcome relief from dry conditions. From a journal article that I wrote in 2006 about the impact of four tropical systems on the 2005 drought in Illinois,

The passage of four tropical systems alleviated drought impacts, particularly in southern and central Illinois during the 2005 growing season. The four systems were Tropical Storm Arlene, and Hurricanes Dennis, Katrina, and Rita. Several circumstances make this situation significant for Illinois. The historical tropical cyclone records indicate that while an occasional tropical system passes through Illinois, occuring in 26 years since 1851, 2005 was the first time for four such systems in one season. Timing of 4 to 6 weeks between tropical systems benefited agriculture while minimizing flooding. Tropical Storm Arlene and Hurricane Dennis also occurred relatively early in the growing season when critical moisture was needed. Aggregating the rainfall from these four events shows that they provided significant drought relief in southern and central Illinois during the 2005 growing season. Without those four systems, southern and central Illinois could have been in drought almost as severe as that in northern Illinois with 7- to 10-inch rainfall deficits instead of the observed 1- to 6-inch rainfall deficits.

From 099-14MS2611-print, Tropical Storms Reduced Drought in Illinois in 2005
For those sharp-eyed individuals, you may notice that Alberto is referred to as a subtropical storm, as opposed to a tropical storm. A good discussion of why it is a subtropical storm can be found at the Weather Channel. For us in Illinois, it really doesn’t make that much difference between the two types of storms (tropical vs subtropical) since they are no longer over warm waters by the time that reach us. In either case, they are much weaker upon arrival with the greatest risk from flooding rather than high winds.

One Reply to “Illinois to Feel Effects of Alberto”