The statewide average temperature for Illinois from April 1-11 was 35.6 degrees, 12 degrees below normal. While we are having a few days of warm weather now, we are expected to get right back into colder weather over the weekend. The NWS forecast for the next 14 days shows an overall picture of below-normal temperatures. Even so, I expect the departures from normal won’t be quite as severe as the first 10 days of April.
If you are thinking that you have never seen an April this cold, you are probably right. Here are the top ten coldest Aprils in Illinois. You have to go back to 1983 and 1982 for some really cold Aprils.

The past is not always the key to the future. You may have noticed that 1983 (#8) is on the list and was a hot, dry growing season in Illinois. However, 1982 (#9) is on the list as well and was a cool, wet growing season in Illinois. I hesitate to draw any conclusions from the other cases because most of them are from the first half of the 20th century when Illinois was generally cooler and drier, so naturally, those subsequent growing seasons were cooler than normal by today’s standards.
Another thing to consider is that while the central US has been very cold in April, it has not been the case in other parts of the US, especially the Southwest. I suggest we build a twin pipeline to New Mexico and exchange some of our cold air with some of their very warm air. 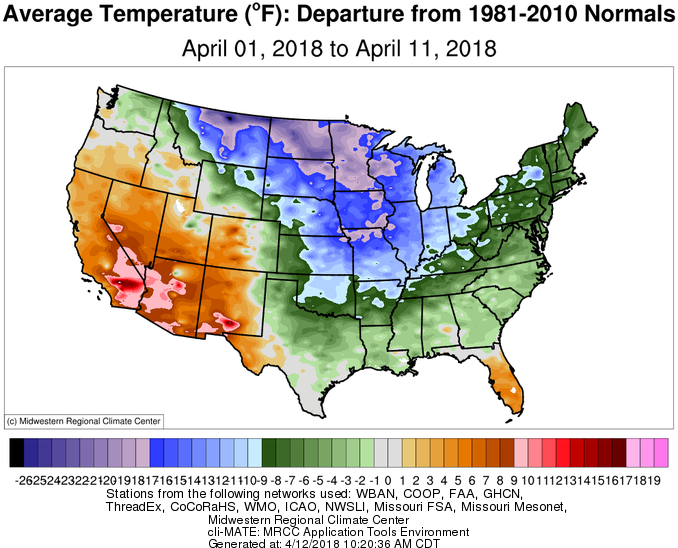 April temperatures over time in Illinois: If you look at April temperatures in Illinois since 1895 (graph below), there has been a warming trend (blue line) of 2.1 degrees per century, which makes this April even more unusual. The gray horizontal line is the 1981-2010 average (aka normal). Remember, one cold April does not make or break a long-term climate trend. 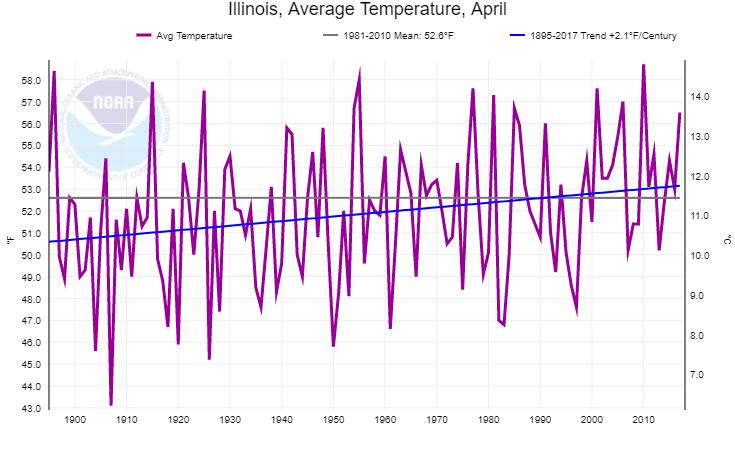 6 Replies to “Cold Start to April in Illinois”