Based on preliminary data, 2017 is on track to be the 6th warmest year on record in Illinois with a statewide average temperature of 54.5 degrees, which is 2.2 degrees above normal. This was in spite the very cold ending to December (more on that in a minute). We experienced the warmest February on record with a statewide average of 41 degrees, 10.1 degrees above normal. On the other hand, Illinois experienced its tenth coolest August on record in 2017 with a temperature of 70.5 degrees, 3.1 degrees below normal. Eight out of the 12 months experienced above-normal temperatures. 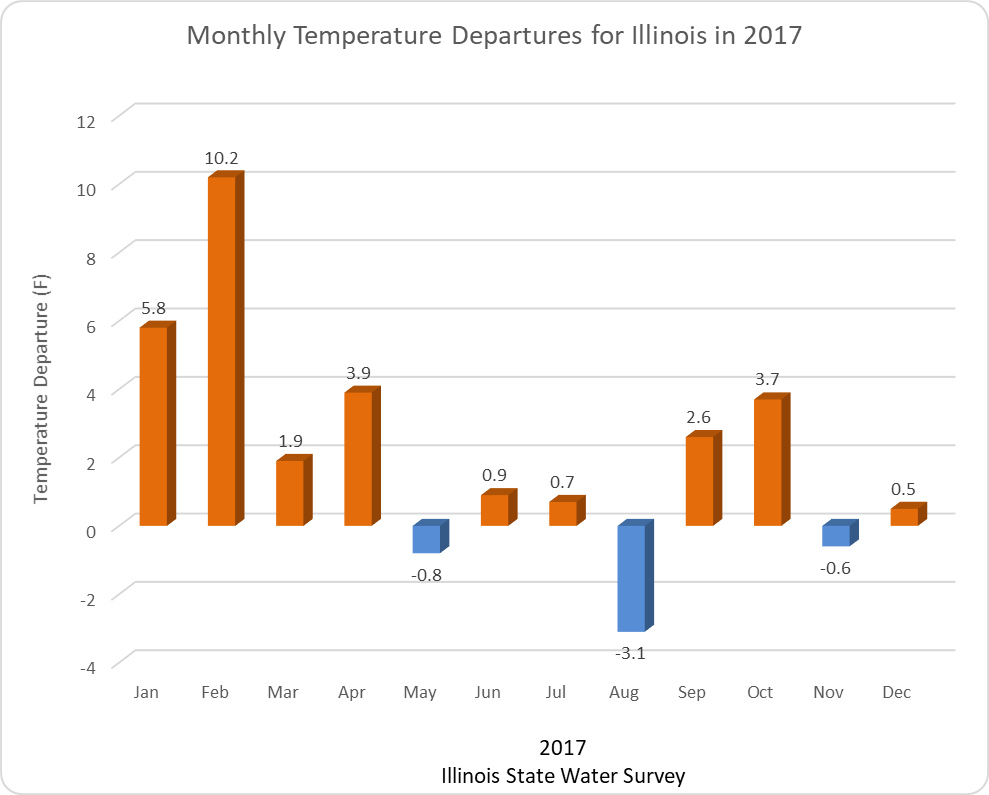 More about December – it’s funny to think that up until Christmas Eve, we were enjoying exceptionally mild December weather. Here are the daily temperature departures from 1981-2010 normals in Champaign-Urbana. The rest of Illinois had similar experiences. The end result is that the cold and warm weather more or less balanced out in December, leaving the statewide average temperature for December at 30.4 degrees, 0.5 degrees above normal. I originally posted the following right at the beginning of January “28.9 degrees, 1 degree below normal”, which was based on very preliminary data. 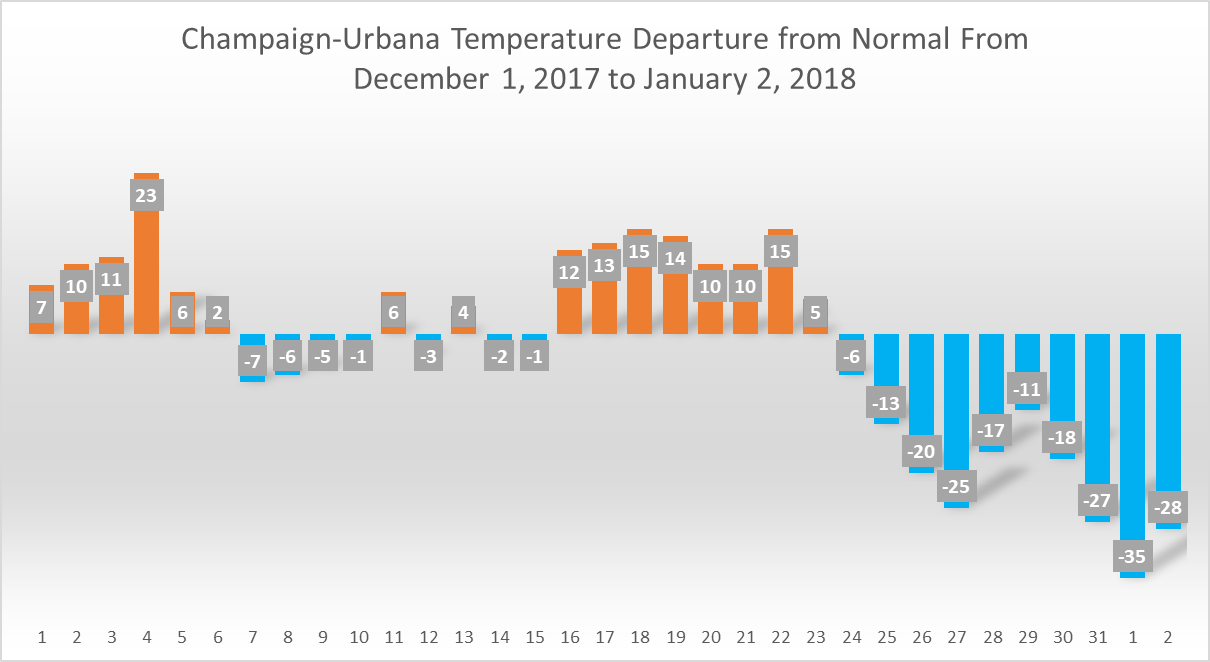 The statewide average precipitation for 2017 was 37.65 inches, 2.31 inches below normal. However, that obscured several dramatic precipitation events such as the heavy rains in southern Illinois in spring, and in northern Illinois in July and September. Here are the monthly precipitation departures from normal for Illinois. Illinois received 6.86 inches of rain in April, 3.08 inches above normal and the 5th wettest April on record. On the other hand, Illinois experienced its 5th driest September on record with only 0.82 inches, 2.41 inches below normal. 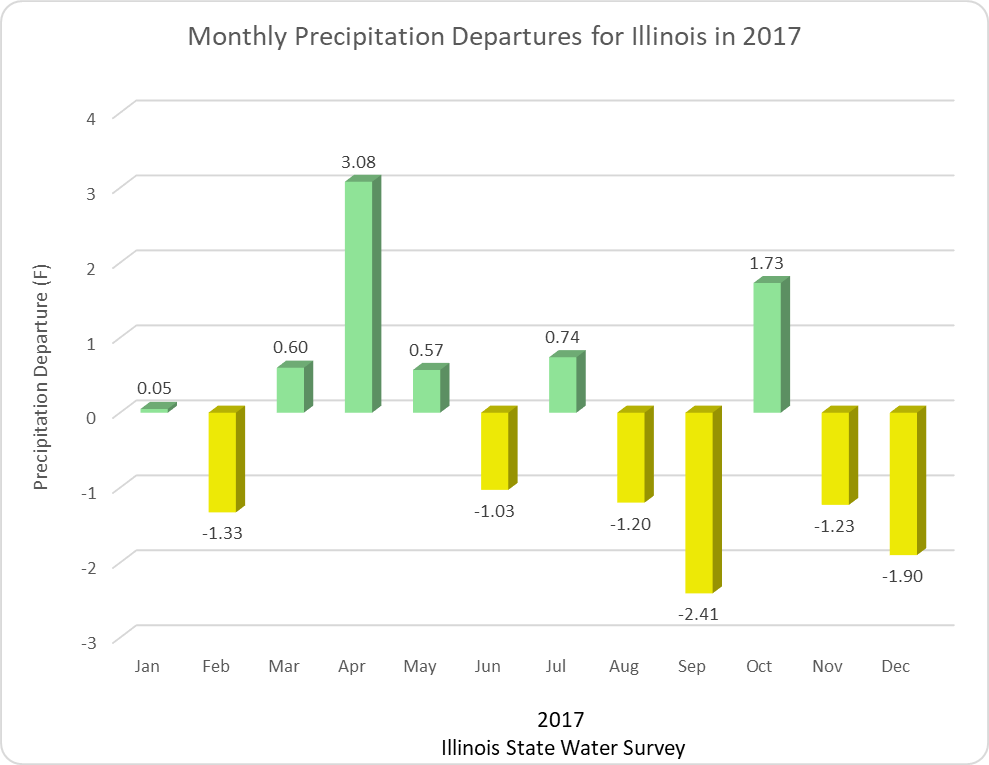 The map of precipitation departures at the end of 2017 show the areas of concern for Illinois. Some exceptionally dry areas exist in central Illinois, around St. Louis, and parts of southeastern Illinois. These will be areas to watch in spring for the 2018 growing season. 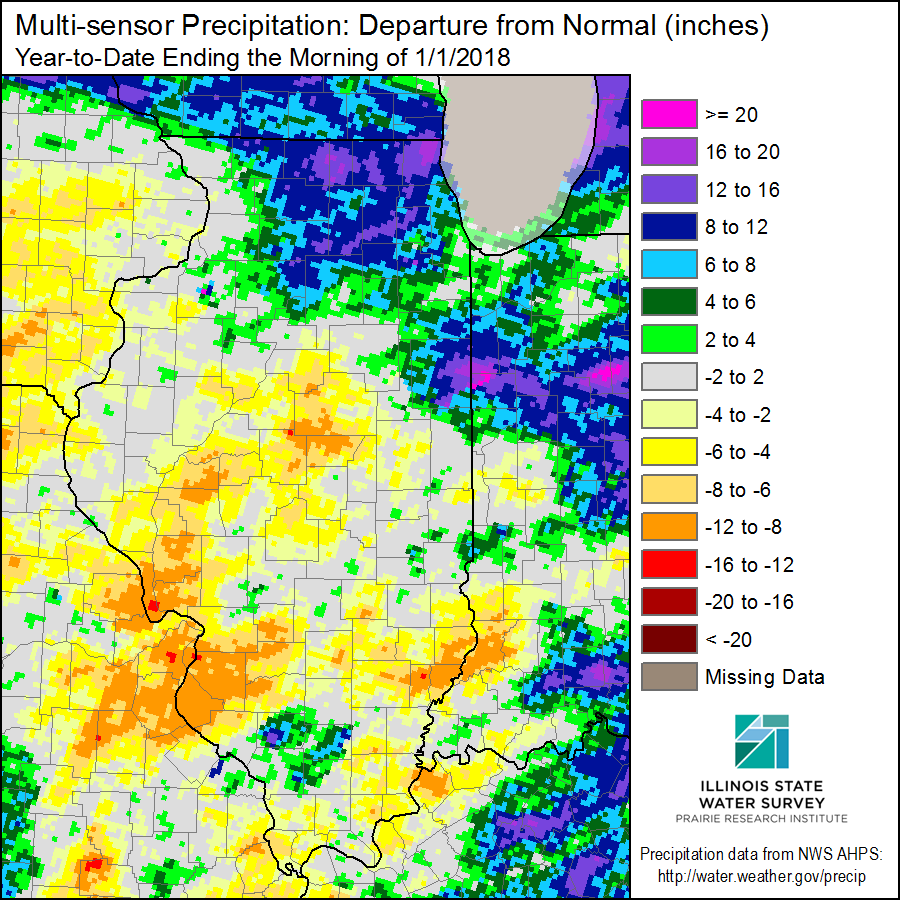 Looking closer at December, the statewide average precipitation total was 0.79 inches, 1.90 inches below normal and the 7th driest December on record. Far southern Illinois received 1 to 3 inches of precipitation, but the rest of the state received less than an inch. The figure below shows total precipitation (left panel) and departures from normal (right panel). Click to enlarge.

Snowfall for the 2017-18 season got off to a slow start but we started to see some significant accumulations by the end of December. Snowfall totals ranged from 6 to 15 inches in the northern half of the state and down to almost zero snowfall in far southern Illinois by December 31. Cissna Park (Iroquois County) reported the largest winter snowfall total of 15.5 inches. Mt. Carroll (Carroll County) was in second place with 10.8 inches, and Chatsworth (Livingston County) was in third place with 10.5 inches.
Here are the maps of observed (left panel) and departures from normal (right panel) through December 31. Click to enlarge.

As you can see, most of the snowfall for the 2017-18 season fell in December. The largest totals stretched from the Quad Cities and passed just south of Chicagoland.  Overall the state remained below normal on December snowfall.