The Kansas City NWS office posted this image showing that rivers have no measurable effect on tornado tracks.

The case for St. Louis reminded me that one of the worst tornado disasters in US history occurred when a tornado tracked through St. Louis, jumped the Mississippi River, and continued doing damage in East St. Louis. That was May 27, 1896. Besides busting the myth about rivers, it busted the myth that tornadoes do not hit major cities. At the time, St. Louis had a population close to 500,000.

The St. Louis Public Library has a great collection of photos and newspaper articles on the event. A total of 255 people were killed in both Illinois and Missouri. It was estimated to be an F-4 tornado on the Fujita scale, based on the damage seen in photographs.

Nine days after the event, a book was published based on newspaper accounts with lots of photos. It has recently been reprinted by Southern Illinois University Press and called “The Great Cyclone at St Louis and East St Louis, May 27, 1896”. Besides the incredible amount of detail on the storm’s damage, you are treated to some vivid and lurid prose (which was the newspaper style of the day).

Example of the damage from the 1896 event.

According to the National Weather Service report on the April 9, 2015, tornadoes, the tornado that tracked through Fairdale was rated EF-4 on the Enhanced Fujita scale. This would be the first EF-4 tornado in April since 1981 for Illinois and only the 33rd in Illinois history, regardless of month, since reliable records began in 1950.

Here are all the F/EF-4 tracks for Illinois from 1950-2014, from the MRCC tornado tracker tool. Unfortunately, we cannot screen out just the April events at this time. While this is a screenshot of the tool, the actual tool allows you to zoom in and out. If you point to a track then you get a pop up window with the details of that track. Check out the tornado tracker tool – it’s free. 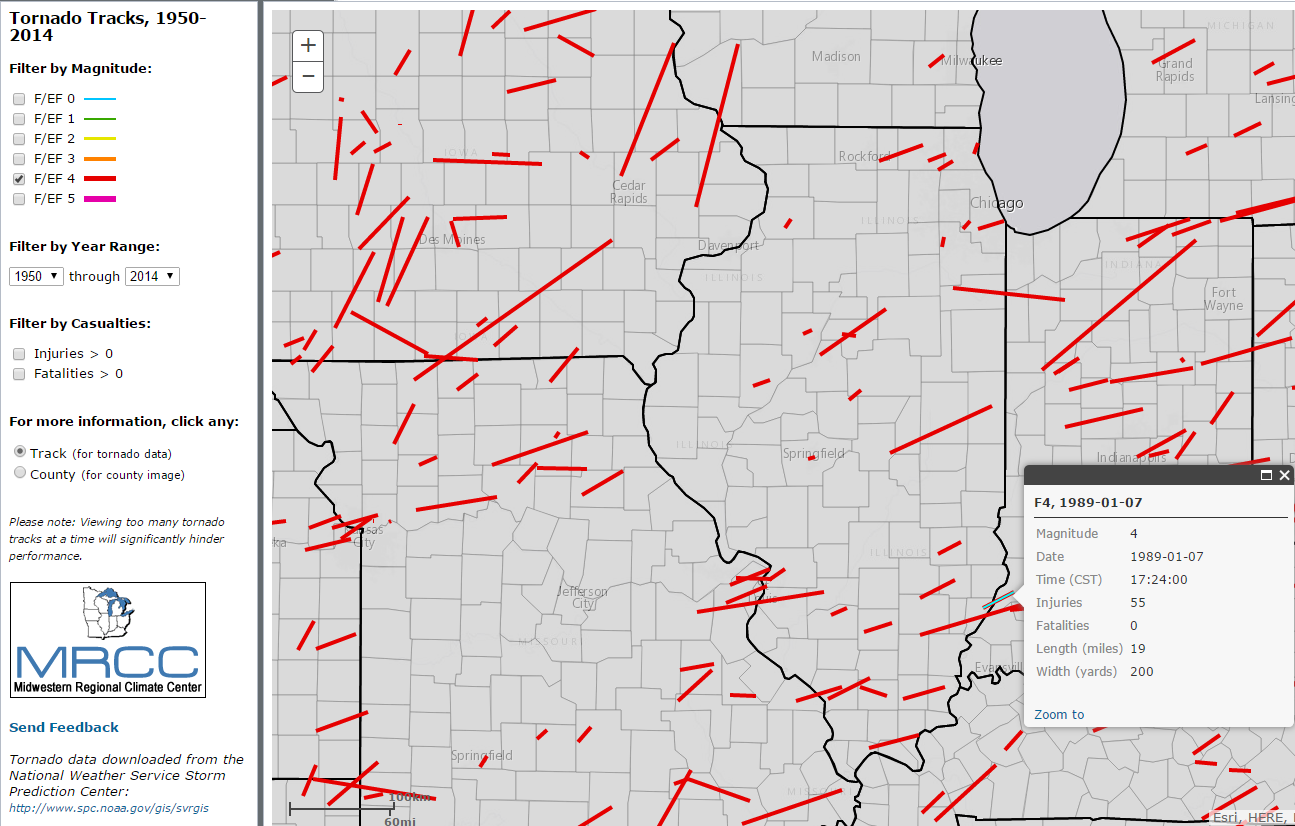 Today is the 62nd anniversary of the first documented case of a tornado detected by radar. Illinois State Water Survey staff, at Willard Airport in Champaign, IL, captured the historic event on film on April 9, 1953. This discovery helped lead to the first national weather radar network in the United States.

END_OF_DOCUMENT_TOKEN_TO_BE_REPLACED

While tornadoes can happen any time of the year, the tornado season really starts to ramp up in March in Illinois (see plot below) and remains active through the spring and on into summer. April, May, and June are the three standout months historically. So far 2015 has been very quiet with no severe weather reported in Illinois so far, according to NOAA.

You can see more plots like this on our tornado plots page.