Climate change has become a major issue will have direct and indirect impacts on Illinois. We know the climate in Illinois has changed in the past due to natural forces such as changes in the amount of solar radiation, ocean circulation, volcanoes, etc. However, humans can impact climate on a local, regional, and global scale, through increases in greenhouse gasses, changing aerosols (small particles in the air such as dust or sulfates from coal burning), and land use changes (change from prairie to agriculture to cities). Therefore, climate change is the result of complex interactions between natural and human-induced forces.

The NOAA Centers for Environmental Information released climate assessments for each state in 2017, including the Illinois Climate Summary. The key findings for Illinois are: 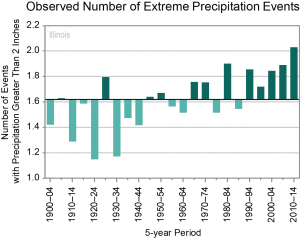 FIGURE: The observed number of days with extreme precipitation events (annual number of days with precipitation greater than 2 inches) for 1900–2014, averaged over 5-year periods; these values are averages from 43 available long-term reporting stations. A typical station experiences 1–2 such events each year. The number of extreme precipitation events has been above average since the 1990s. During the most recent 5-year period (2010–2014), Illinois experienced a record high number of events when stations averaged more than 2 events annually. The dark horizontal line is the long-term average (1900–2014) of 1.62 days per year.  Source: CICS-NC and NOAA NCEI.

The 2014 National Climate Assessment reviewed climate trends across the Midwest, including Illinois, in this chapter report. Extreme heat, heavy downpours, and flooding will affect infrastructure, health, agriculture, forestry, transportation, air and water quality, and more. Climate change will also exacerbate a range of risks to the Great Lakes. Explore how climate change is affecting the Midwest. The report also has chapters by sectors such as water, agriculture, transportation, forestry, and human health. In addition, there are response strategies presented mitigate or adapt to the current and expected trends. The full report can be found at the National Climate Assessment website.

These two figures below are our best estimates of annual temperatures and precipitation in the last 185 years in Illinois.

Temperature: the 1800s were considerably cooler with a remarkable warming trend through about 1940, followed by a cooling trend through the early 1980s. Temperatures have been warming in Illinois since the 1980s. The warmest year on record was 2012, followed by 1998. In recent decades, cold years have become much less common. While 2014 will be remembered for the cold winter, it was mild in comparison to years in the 1800s and early 1900s.

Precipitation: the mid 1800s were considerably wetter than today. This was followed by a trend towards drier conditions that ended around 1900. Precipitation remained low until a rapid increase occurred in the 1960s. This period of wetter conditions remains today.

Besides fewer stations, the observation practices and the location of the instruments in 1800s were different than today. For example, in major cities the early thermometers and rain gages were sometimes located on the roof tops in the downtown portion of the city. In rural areas, thermometers were often located on the north porch of the observer’s house. As a result of fewer stations and different observing practices, the level of uncertainty in the 19th century numbers is higher. On the other hand, the observed wet conditions in the 19th century is supported by higher flows on the Mississippi and Illinois Rivers and higher lake levels on Lake Michigan. There are numerous accounts of cold winters and problems with frost damaging crops as well during that period.

An 11-year, moving average was included to smooth out some of the year-to-year variability in the records. The green line denotes the 1981-2010 average or normal.