According to the NOAA Storm Prediction Center, Illinois is ranked fourth in the nation for the number of tornado reports in 2015. Here are the top five states:

The most outstanding event for 2015 was the April 9 outbreak that produced 11 tornadoes, including a rare EF-4 tornado. The map on the left shows all the severe weather reports for that day. More on this outbreak can be found here.

The map below is for all the tornado reports across the US in 2015. Many of the Illinois tornadoes occurred in far northern and far southern Illinois this year, while central Illinois has been relatively quiet. END_OF_DOCUMENT_TOKEN_TO_BE_REPLACED

Here is the radar estimated precipitation with areas in green indicating 1 to 2.5 inches an areas in yellow and orange indicating 2.5 to 4 inches. 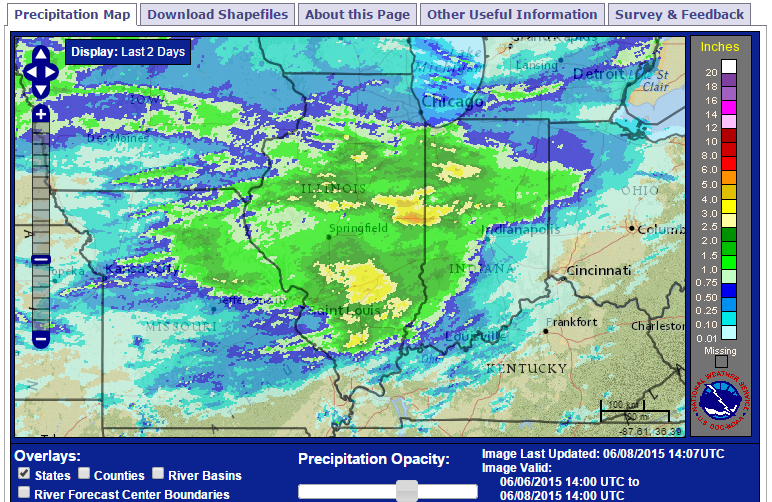 Below are reports of storm damage across the US for the 24 hours ending on the morning of June 8, 2015. The two tornadoes in Illinois occurred near Petersburg and Seymour. Neither one cause much damage and no injuries. There were a few reports of 1-inch hail and many reports of wind damage in Illinois from these storms. Data obtained from the NOAA Storm Prediction Center storm damage page. END_OF_DOCUMENT_TOKEN_TO_BE_REPLACED

According to the National Climatic Data Center, Illinois was on the list twice for billion-dollar weather disasters in 2013. In both cases, some damages occurred elsewhere but Illinois took the brunt of the losses. These numbers are based on reports from government agencies, media reports, and insurance industry estimates.

The first was the flooding in the Chicago area in April 2013. I had posts on this event here, here, and here. This event produced an estimated $1 billion in damages and led to 4 deaths. They described it as:

A slow-moving storm system created rainfall totals of 5 to 10 inches across northern and central Illinois including the Chicago metro. This resulted in damage to many homes and businesses. There was also severe weather damage from wind and hail across Indiana and Missouri.

The second was the November 17, 2013, tornado outbreak that caused an estimated $1 billion in damages and led to 8 deaths. I wrote about it here, here, here, here, and here. They described it as:

Late-season outbreak of tornadoes and severe weather over the Ohio Valley (IL, IN, MO, OH, KY, MI) with 70 confirmed tornadoes. Most severe impacts occurred across Illinois and Indiana.

As of May 8, 2013, the severe weather statistics for Illinois this year are relatively low (see first map). There have been 2 tornado reports (red dots), 25 hail reports (green dots), and 62 wind damage reports (blue dots). By this point last year, we had 22 tornadoes including the deadly February 29 tornado at Harrisburg, IL, that killed 8 people.
Harold Brooks of the NWS has an interesting post on the current “tornado drought” in the US for the period from May 2012 to April 2013. He says,

The 12-month period from May 2012 to April 2013 was remarkable for the absence of tornado activity and tornado impacts in the United States.

The number of tornadoes in the US was the lowest on record (197) and the number of deaths (7) was the second lowest during this 12-month period. Brooks’ looked at tornadoes that were rated EF-1 or greater. Those tornadoes tend to be better documented over time than the relatively weak EF-0 events. Those records go back to 1954. The number of tornado deaths were based on records going back to 1875.
A possible explanation for the low numbers during this May 2012 to April 2013 period was that much of the central US was in drought in 2012 (see second map). This was followed by a late, cold spring in 2013 (see third map). Both of these conditions seem to produce fewer severe thunderstorms, at least in Illinois.
There has been lots of discussion about whether the low numbers this year or the high numbers in 2011 either prove or disprove climate change. It is hard to track historical climate changes in the tornado reports in Illinois and the US because of major changes in how the data were collected over time. Furthermore, climate models used for understanding future climate change are not designed to simulate severe weather at such a small scale. As a result, the Intergovernmental Panel on Climate Change last year stated there was “low confidence” in finding historical trends or making projections of possible future tornado activity (IPCC, 2012 pdf). You can find a short discussion on historical tornado trends in Illinois on my website.
While these are interesting statistics, it’s important to keep in mind that things can change in a hurry. All it takes is one day with the right conditions, especially now that we are finally getting warmer, and Illinois could be faced with another tornado outbreak. Stay alert!