One of the impacts of the warmer-than-average weather in October and November is that soil temperatures have been slow to fall below 50 degrees . This is the important temperature threshold for those applying fall fertilizer (55 degrees with an inhibitor).

You can track daily soil temperatures from the Illinois Climate Network site:  http://www.isws.illinois.edu/warm/soil/ 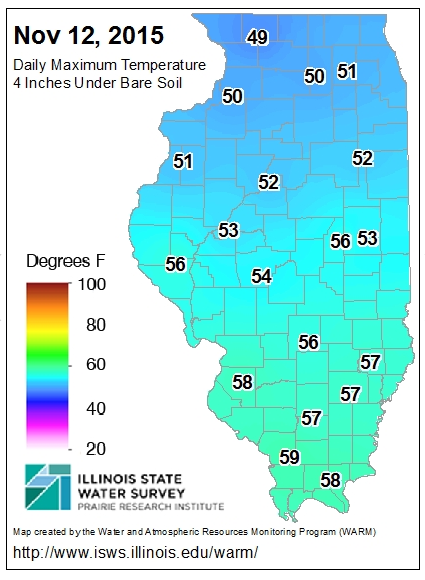 END_OF_DOCUMENT_TOKEN_TO_BE_REPLACED

As the snow turns to mud this week, this is a good time to advertise links for the soil temperatures in Illinois. The Water Survey operates a 19-station network of sites around the state collecting hourly soil temperatures at 4 and 8 inches under grass as well as an estimate under bare ground.

All this information can be found at the Illinois Climate Network Soil Data site. Below is just a screenshot of that page to show where you would find that information on the real web page.

The Illinois State Water Survey maintains a network of 19 soil temperature sites across the state that measure temperatures at 4 and 8 inches. You can look at maps for , any hour of the day, high for the day, low for the day, under sod, and under bare soil. You can find all their data at this site: http://www.isws.illinois.edu/warm/soiltemp.asp

Here is the 4-inch soil temperature from yesterday.  The data now arrive hourly. My mistake – they used to upload the data once a day and do QC but now it is more timely. As you would expect, soil temperatures change more slowly than the air temperatures.

And here is what it looked like two years ago after a record warm March. I chose April 2, 2012 for the same time of day and depth. As you can see, the soil temperatures were about 12 degrees warmer and USDA NASS reported that 5% of the corn crop had already been planted by that date.

One of the effects of this exceptionally cold winter has been that our soils have remained frozen at considerable depths. We have hourly soil temperatures under grass at 19 sites across the state at 4 and 8 inches, available through the WARM website, that give us glimpses of soil conditions.

Here are snapshots of the daily low soil temperature at 4 inches yesterday and a week ago when temperatures were much warmer. The 4-inch temperature responded to the warmer weather and showed signs of thawing before re-freezing this week. In many parts of the state, the 8-inch soil temperatures remained frozen during this period. Click on each map to enlarge.

Soil temperatures depend on soil types, soil moisture, vegetation, snowcover, and exposure. In general, drier soils warm up and cool faster than wet soils. Both vegetation and snow can insulate the soil for air temperature extremes. I recall the morning of January 5, 1999, when we had a foot of snow on the ground and an air temperature of 25 degrees below zero. Because the winter had been mild up to that week, the soil temperature at 4 inches was 32 degrees, a difference of 57 degrees between 4 inches below ground and 5 feet above ground!

While the above site tracks temperatures at specific depths, the NOAA North Central River Forecast Center maintains a web site with observed frost-depths in Illinois and points to the north. For most of this winter, the frost depth has run in the neighborhood of 10 to 20 inches across Illinois with a few sites going deeper. Here is a screenshot of this morning’s map. While it doesn’t work on the screen shot, you can mouse-over the points on the map on the website and see the individual reports.

Finally, Wayne Wendland, the former State Climatologist for Illinois, did a frost-depth study in Illinois using data collected from grave diggers from 1980 to 1996. He developed a network of sites across Illinois through the Illinois Cemetery Association and provided post cards that the grave diggers filled out every two weeks in winter. They noted frost depth, soil moisture, soil texture, ground cover, and exposure. The deepest observed frost depths during this period ranged from 5 inches in far southern Illinois to 30 inches in far northern Illinois. The results were published in the Transactions of the Illinois State Academy of Science (pdf).