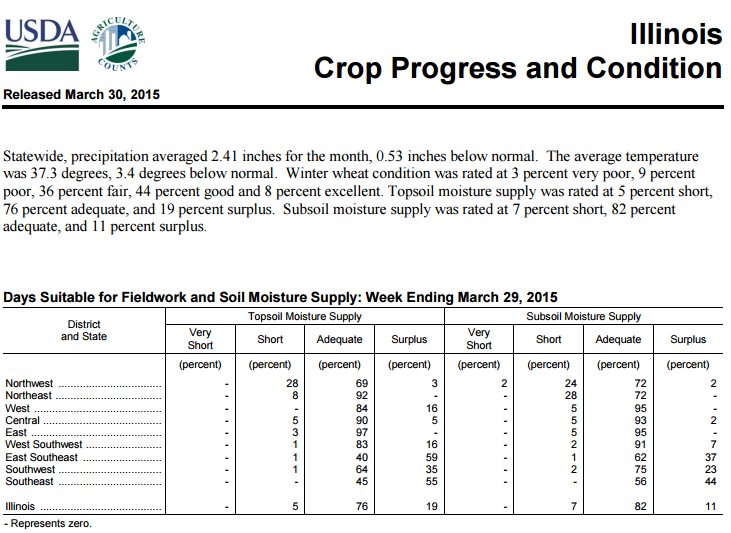 END_OF_DOCUMENT_TOKEN_TO_BE_REPLACED

As the snow turns to mud this week, this is a good time to advertise links for the soil temperatures in Illinois. The Water Survey operates a 19-station network of sites around the state collecting hourly soil temperatures at 4 and 8 inches under grass as well as an estimate under bare ground.

All this information can be found at the Illinois Climate Network Soil Data site. Below is just a screenshot of that page to show where you would find that information on the real web page.

This April was the 4th wettest on record for Illinois with 6.90 inches, based on the preliminary numbers. That was 3.13 inches above the long-term average of 3.77 inches.
To show you how wet it was, this April easily beat out the combined statewide rainfall totals for Illinois in May, June, and July of 2012 during the worst of the drought. The total rainfall for those months in 2012 were 2.50 inches, 1.80 inches, 1.48 inches, respectively, which led to a total of only 5.78 inches. That was 1.12 inches less than this April!
The first map below shows the spectacular rainfall totals across much of the state. The areas in yellow and orange were 6 to 9 inches. A few areas in pink and red were 9 to 11 inches. This product has a 4 kilometer resolution and is based on radar estimates calibrated with rain gauges.
The second map shows the same rainfall amounts expressed as a percentage of the long-term average. There was a small patch of below-average rainfall in far southern Illinois. Otherwise the rainfall across the rest of the state was much above average. Many areas in the dark blue were 2 to 3 times their long-average rainfall.
Speaking of rain gauges, the two largest monthly totals for April so far were Augusta with 12.28 inches and Naperville with 11.03 inches. Several more stations reported totals in the 10-inch range.
There were two major impacts of the wet April. One was widespread flooding on the Illinois, Wabash, and Mississippi Rivers and their tributaries. Several sites along the Illinois reported record high river crests in April. Because the flooding included the Chicago area, the dollar damages and number of people affected will be quite large.
The second impact of the wet April was the delay in fieldwork. In the April 29 USDA NASS report, only 1 percent of the corn crop was planted, compared to 76 percent last April, and a five-year average of 36 percent.

The statewide average temperature was 50.1 degrees and 2.3 degrees below average. That was not record-setting but reflects the fact that we had a lot of cool, cloudy days in April.

Below are the maps for 4, 8, and 20 inches. For most of Illinois, the fraction of water by volume is in the range of 0.3 to 0.4 – that’s good, especially for this time of year. There are a few places over 0.4, which means they are getting close to saturation at that level of the soil. A month ago a lot of stations were in the 0.10 to 0.15 range, which is pretty much the lower limit of what plants can use.
These numbers suggest that soil moisture conditions in much of Illinois have improved dramatically after Tropical Storm Isaac. However, they still have room for improvement in northern Illinois. And the rains came too late for the corn crop and much of the soybean crop. Even so, it is reassuring that we have gone a long ways towards recharging the soil moisture as we move into fall.
By the way, you’ll notice the 0.06 values in west-central IL. Those are in an extremely sandy soil near Havana in the Illinois River floodplain. They drop quickly after a rain event and stay very low most of the year.