The National Centers for Environmental Information (formerly NCDC) released their numbers for June, showing that Illinois did indeed have its wettest June on record with 9.30 inches (according to their calculations). That made Illinois the wettest state** in the US for the month.

Here are the national maps showing the statewide precipitation values for June 2015. While Illinois received 9.3 inches of precipitation, California received only 0.23 inches – an amount 40 times less than Illinois.

END_OF_DOCUMENT_TOKEN_TO_BE_REPLACED

According to the rainfall reports through yesterday (6/29), the statewide average precipitation is now 9.37 inches.

The statewide average precipitation is based on records from about 650 rain gauges across the state. A majority of the reports come from two networks with trained volunteers and standardized equipment and procedures. One network is called CoCoRaHS and the other is the NWS Cooperative Observer Network or COOP for short. These dedicated observers give timely and accurate information with outstanding coverage across the state.

Tomorrow we will be able to do the calculation through June 30. 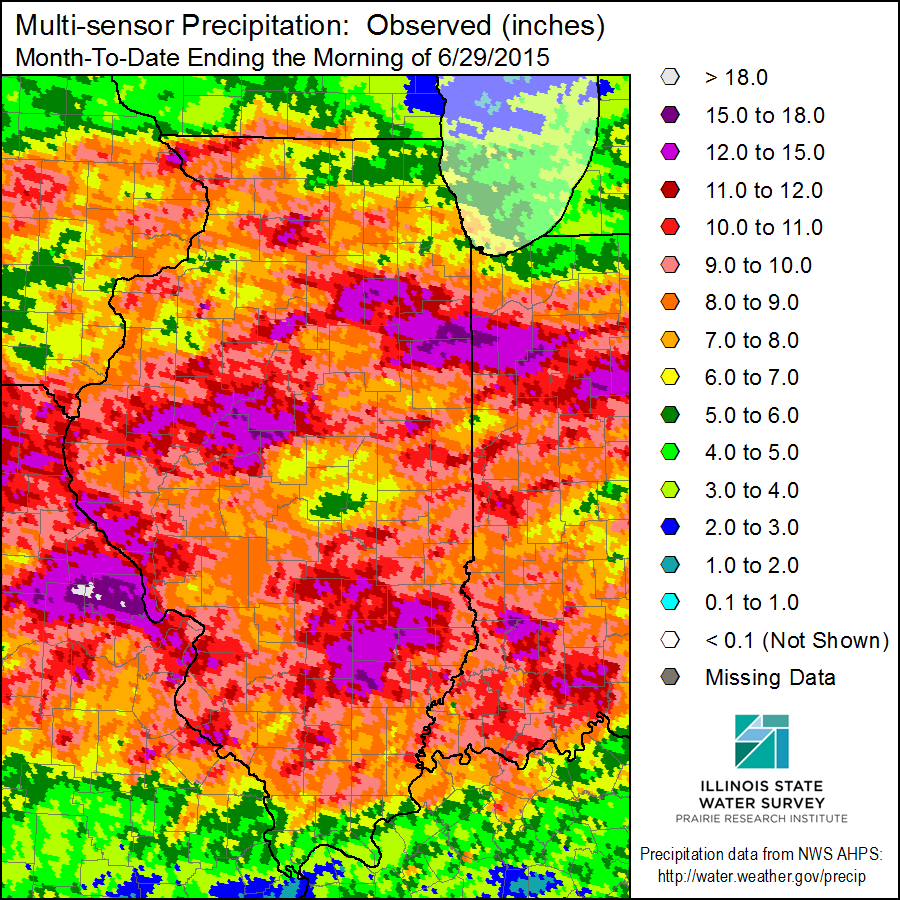 Even before today’s rain, the statewide average rainfall for June in Illinois is 7.11 inches. That makes it the 5th wettest June on record. And June is not over. Here are the top ten wettest June totals on record and where we stand:

Notice anything unusual about that list? Five out of the 10 wettest June totals have occurred since 2000. Our statewide records go back to 1895.

Due to the heavy rains of June, we first saw flooding on the smaller rivers and streams in Illinois. Now the larger rivers are responding to the wet conditions. The NWS can keep you posted on the latest flooding issues at www.weather.gov

The statewide average temperature for June 2014 in Illinois was 72.9 degrees, 1.1 degrees above average.

Here are the maps of accumulated rainfall in June, 2014, as well as the departure from the 1981-2010 average. The rainfall was widespread across the state, and above-average as well. The area with the highest departures was the northwest corner of the state. There were 13 stations with 10 or more inches of rain in June. The wettest was Galena with 12.42 inches of rain for the month.

Much of the Corn Belt was wetter than average for June (last map) with precipitation departures from average in the range of 6 to 10 inches. That’s more than double the average in many locations. The results are high flows on many rivers and streams and flooding along the main stem of the Mississippi River south of Dubuque, IA.