According to the USDA, corn and soybean conditions in Illinois are not as good as the last two years.

The USDA NASS site has lots of interesting agricultural data, if you know where to look. One of the great reports they put out every week are the crop conditions in graphical form. Just click on a state and go.

In this first graph, you can see the corn crop conditions compared to earlier years. The percent in good to excellent for 2015 is less than 2013 and 2014. It is a little better than 2011, which was hot and dry in places. It was better than 2012 when we had the full blown drought. The second panel shows you the crop conditions in all categories throughout the 2015 growing season. And finally you can see the crop stages this year, compared to last year and the 5-year average. 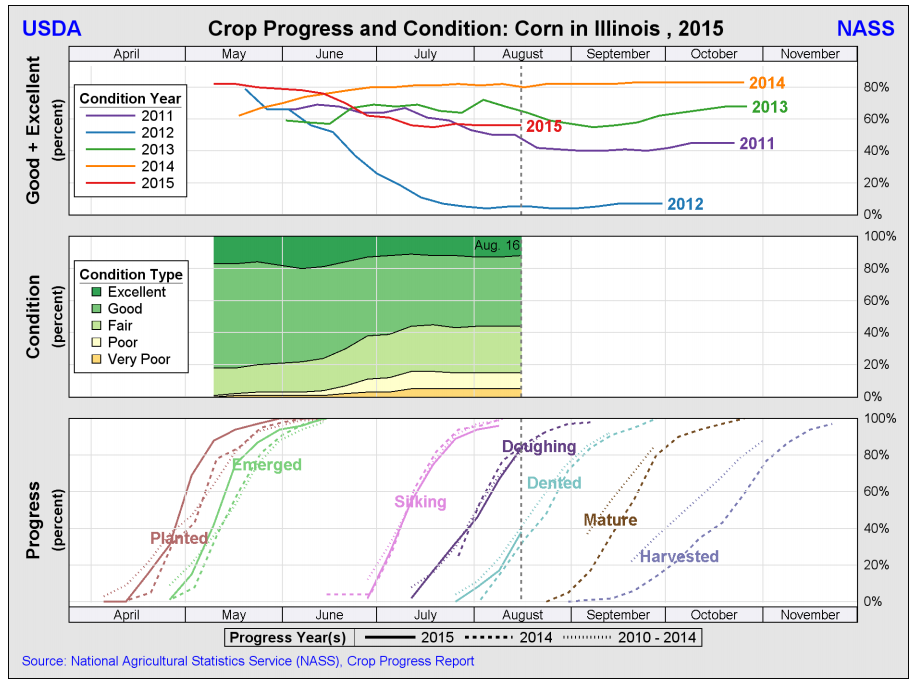 END_OF_DOCUMENT_TOKEN_TO_BE_REPLACED

Last week the Illinois office of the National Agriculture Statistics Service released their report on crop yields in Illinois. The full report can be found here.
As expected, the Illinois corn yield for 2012 was only 105 bushels per acre, 52 bushels below last year. They noted that this was the lowest yield since 1988, when the average yield was only 73 bushels per acres. Because of the severe conditions of the corn crop, almost twice as many acres were harvested for silage in 2012 than in 2011.
Illinois soybean yield for 2012 was 43.0 bushels per acre, down 4.5 bushels from 2011. This was the lowest soybean yield since 2003, when the average yield was only 37.0 bushels per acre. While too late to do much good for corn, rains in the second half of August and the remains of Hurricane Isaac over Labor Day weekend may have provided some benefit to soybeans.
The one bright spot in the Illinois report was winter wheat production. The yield in 2012 was 63 bushels per acre, up 2 bushels from 2011. However, only 660,000 acres were seeded in the fall of 2011, which is down 140,000 acres from the previous fall. I suspect the decline was due in part to the already dry conditions experience in southern Illinois – the primary production area of the state.

There is an excellent article in the integrated pest management Bulletin at the University of Illinois by Emerson Nafziger about the damage of frost to corn this April and it’s impact on yield. You can read the full article at http://bulletin.ipm.illinois.edu/article.php?id=1619

Here are the low temperatures reported last week, sorted from coldest to not so coldest.