Like the rest of Illinois, northeast Illinois, including the counties of Boone, McHenry, Lake, DeKalb, Kane, DuPage, Cook, LaSalle, Kendall, Grundy, and Will, has experienced a wetter climate in recent decades with more heavy rain events.

Northeast Illinois annual precipitation (Fig. 1) averages 36.83 inches (1981-2010 normal). However, the year-to-year variations can be quite large. Past annual values have ranged from 23.9 inches in 1956 to 46.9 inches in 2008. Around 1970, the region became noticeably wetter and this continued into the 1990s. Between 1995 and 2005 the region was somewhat drier, highlighted by the drought year of 2005. Precipitation since 2005 has been much above normal every year except 2012. Overall, precipitation has increased by about 5 inches over the period of record. 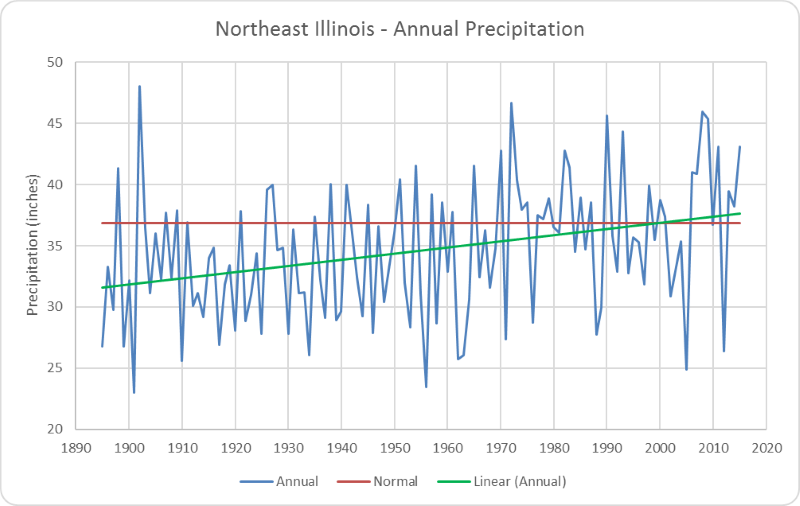 Winter precipitation (Fig. 2) has increased by less than an inch over the period of record. The 1920s, 1930s, and 1940s were a period of somewhat lower winter precipitation. Of the four seasons, winter is typically the driest with much of its precipitation falling as snow rather than rain. Winter is defined here as the months of December, January, and February. 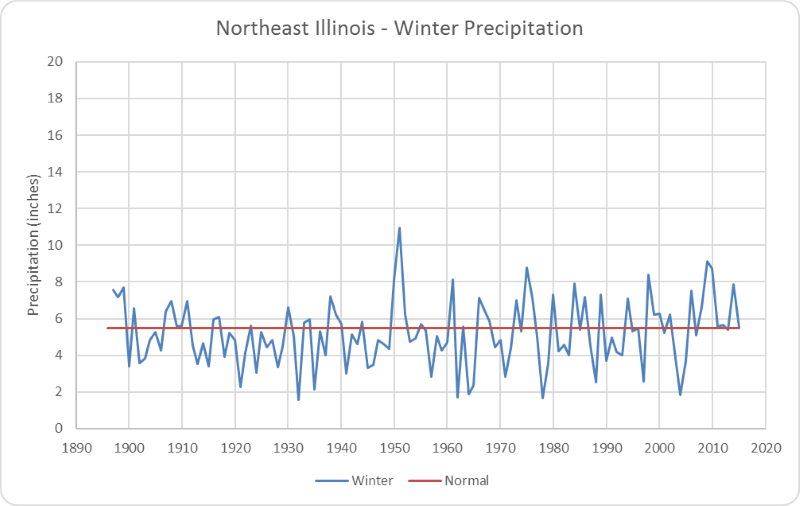 Spring precipitation (Fig. 3) was quite high in the late 1940s and early 1970s and very low in some years of the 1930s. Overall, precipitation has increased by just over an inch over the period of record. Spring is defined as the months of March, April, and May. 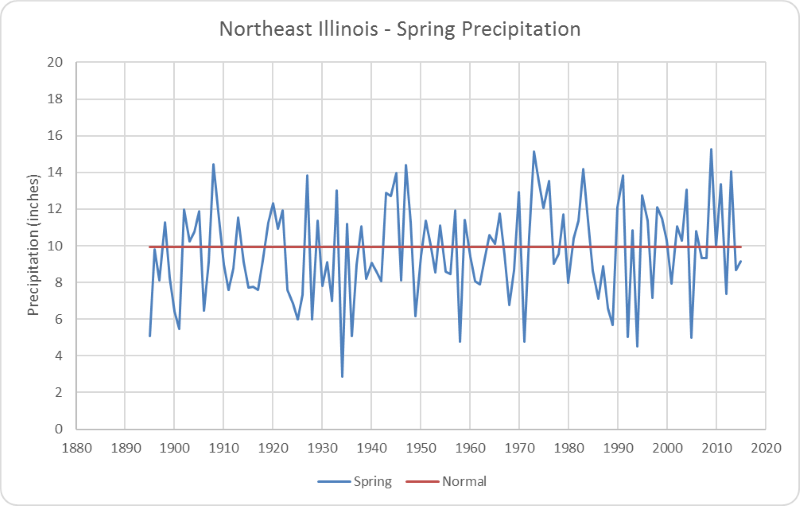 Summer precipitation (Fig. 4) has generally been higher since the late 1950s than prior to that time. Also, the year-to-year variations have been higher since about 1970. In fact, the wettest 4 summers and the driest summer have all occurred since 1970. Overall, precipitation has increased by just over two inches over the period of record. Summer is defined as the months of June, July, and August. 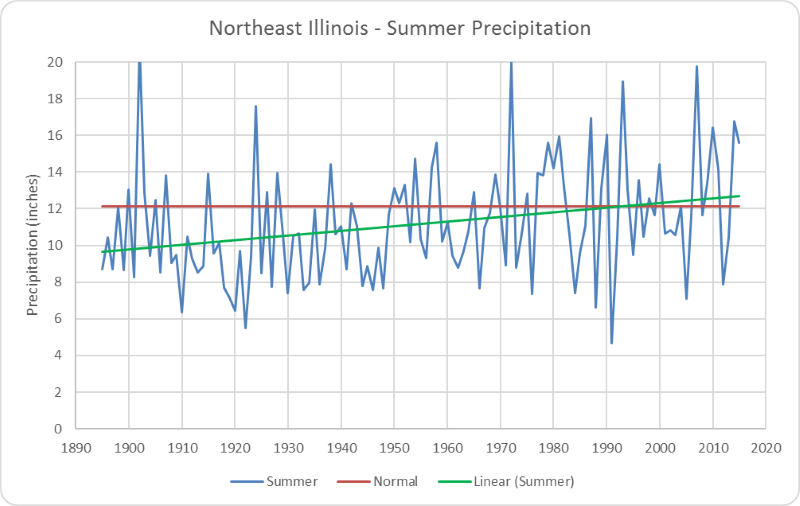 Fall precipitation (Fig. 5) is notable for the very large year-to-year variations, much larger than any other season. Fall is defined as the months of September, October, and November. 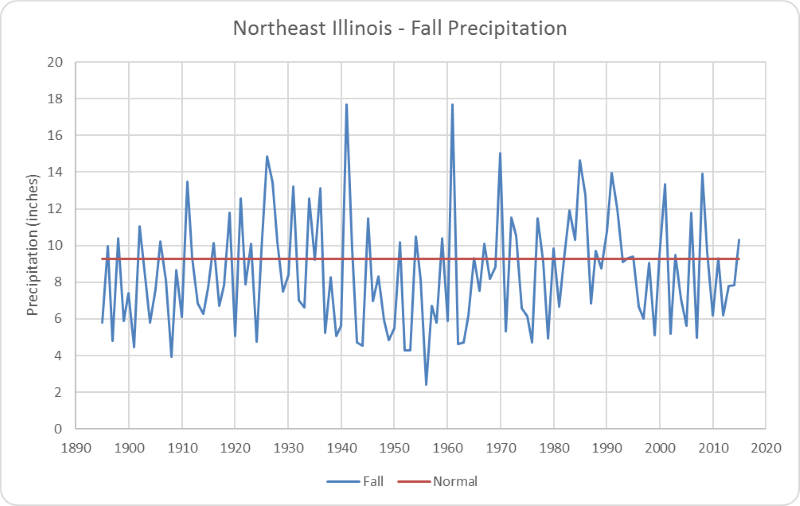 Three better-quality climate stations in the Chicago area were selected for further examination of trends in annual precipitation. Chicago O’Hare airport is probably the best-known station with complete annual records going back to 1959 (Fig. 6). Precipitation has increased by about 5 inches since the late 1950s. Taken together, these three sites suggest that the region has gotten wetter over time. Even so, the region is still at risk for drought, as seen in 2005 and 2012. 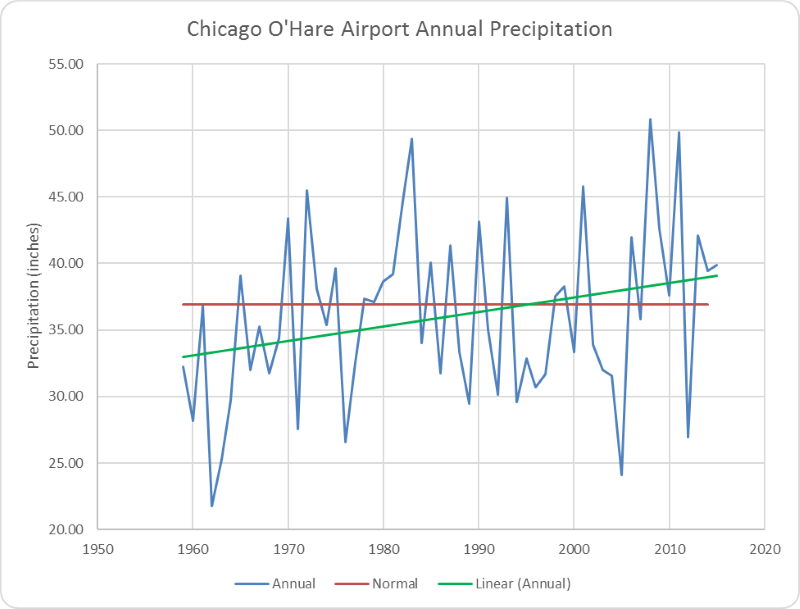 Chicago Midway airport was established before O’Hare and has a climate record that extends back to 1928 (Fig. 7). While O’Hare is on the western edge of Chicago metropolitan area, Midway is in a more urban environment and closer to Lake Michigan. Overall, there has bee a strong upward trend in precipitation with increases on the order of 9 inches from 1928 to 2015. 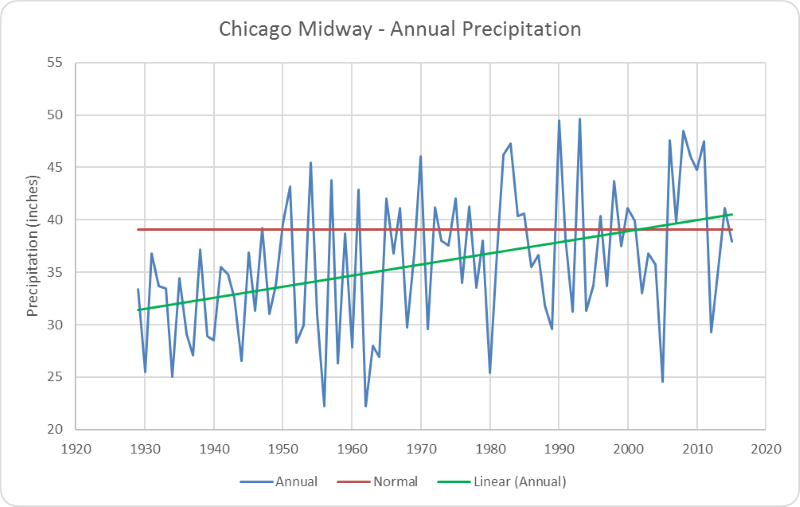 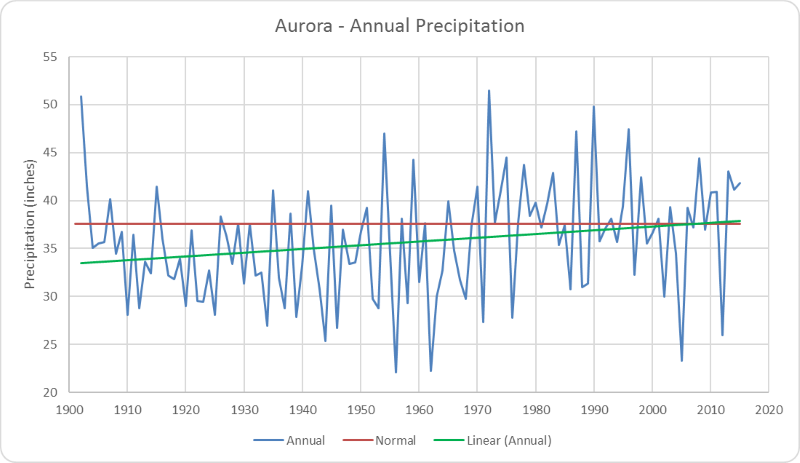 The most recent National Climate Assessment examined the pattern of increased rainfall across the Midwest. They state the Key Message #5 that “Extreme rainfall events and flooding have increased during the last century, and these trends are expected to continue, causing erosion, decline water quality, and negative impacts on transportation, agriculture, human health, and infrastructure.” The report provides an extensive list of evidence to support this position.

Precipitation in northeast Illinois has increased over time. Much of that increase is the result of increases in precipitation in summer and fall. These changes can be seen at individual sites as well as the region as a whole.

The Illinois Department of Natural Resources (IDNR) has released a report examining the prevalence and costs associated with urban flooding in Illinois, along with strategies and recommendations for minimizing damage to property from this flooding. The Illinois General Assembly called upon IDNR to prepare the report in collaboration with several state agencies.