Summary: The NWS Climate Prediction Center has issued their forecasts for September, September-November (Fall), and December-February (Winter). Illinois has an increased chance of being warmer than normal this fall, and wetter than normal this winter.
According to the Climate Prediction Center, the main factors in the forecast are the recent warming trends and the expected La Niña. While the conditions in the Pacific are in the neutral stage between El Niño and La Niña, there is a 55-60 percent chance of a weak La Niña during fall and winter.

The September forecast (top row) has Illinois and the Midwest with equal chances of being above, below, and near-normal on both temperature and precipitation. I call this a neutral forecast since there are no indications that we will be significantly cooler, warmer, wetter, or drier.
The September-November forecast (bottom row) has Illinois and the US with an increased chance of being warmer than normal. They are neutral on the precipitation forecast.

END_OF_DOCUMENT_TOKEN_TO_BE_REPLACED

Illinois has higher odds of being both warmer and drier than average though June, according to the newly released NWS Climate Prediction Center outlooks.

The main driver of the forecast continues to be the strong El Niño event in the Pacific Ocean. El Niño is expected to go away by late spring or early summer. The increased odds of drier conditions through June could be a concern. However, I am more confident in the temperature forecasts from CPC than I am of the precipitation forecasts.

(click on any map to make it bigger)
Illinois has higher odds of being both warmer and drier than average.

Illinois has higher odds of being both warmer and drier than average.

END_OF_DOCUMENT_TOKEN_TO_BE_REPLACED 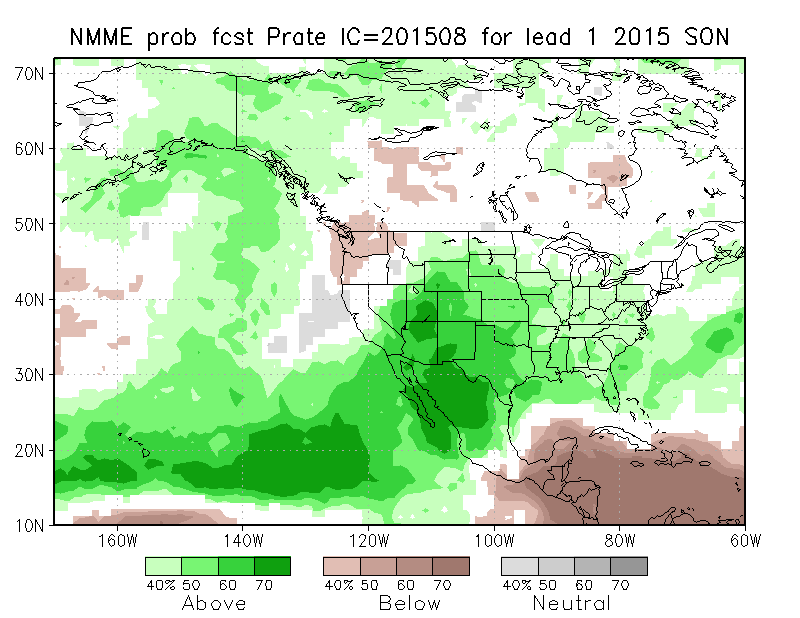 END_OF_DOCUMENT_TOKEN_TO_BE_REPLACED

The forecasts for August and the three-month period of August-October show most of Illinois with an increased chance of being cooler and wetter than average.

El Niño events occur when the waters in the eastern Pacific along the equator are warmer than usual. This changes the weather patterns over the Pacific and US.