July was warmer and wetter than average across Illinois, continuing a warmer than average summer season. The preliminary statewide average July temperature was 77.2 degrees, 1.8 degrees above the 30-year normal and tied for the 29th warmest on record. Preliminary statewide average total precipitation for July was 5.79 inches, 1.71 inches wetter than the 30-year normal and the 12th wettest on record.

June was the 20th warmest on record statewide, and above average temperatures persisted throughout the month of July. The figure below shows daily maximum and minimum temperatures between June 1 and July 30 in Champaign. The Champaign COOP station recorded 36 consecutive days with a daily maximum temperature above 80 degrees, a streak that ended on July 30. The longest streak of 80+ degree days on record in Champaign is 74, between June 19 and August 31, 1959.

The elevated temperatures last month were accompanied by abundant humidity because of persistent atmospheric flow off from the Gulf of Mexico and actively transpiring crops. The heat index combines the effects of temperature and humidity to better represent how humans feel hot, humid weather. The daily average heat index value in Belleville this last month was 87.2 degrees, which was the second highest July average heat index value on record, after 2011. 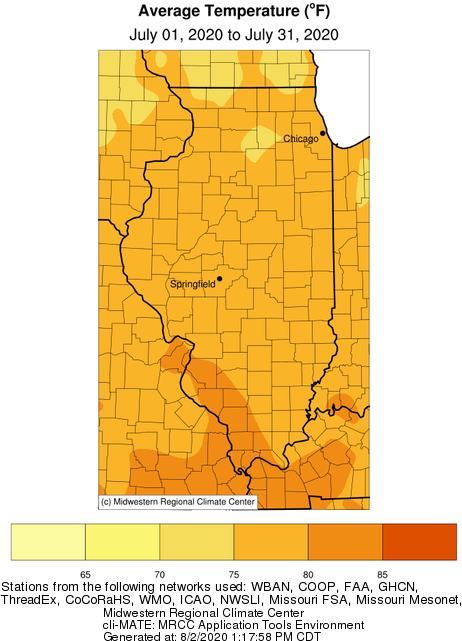 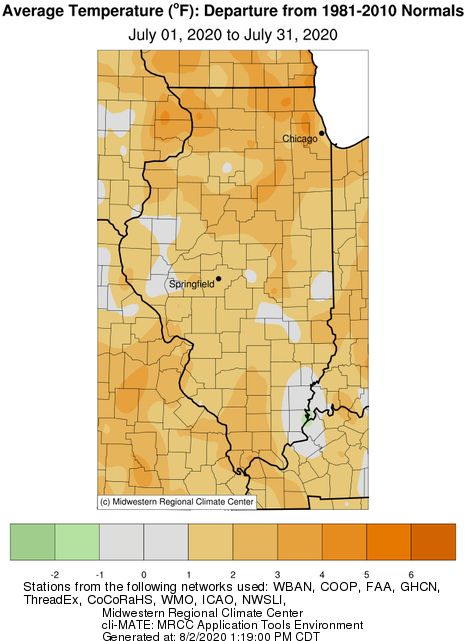 The abundant heat and humidity made for a very active severe weather month in July. The NOAA Storm Prediction Center reported 10 tornado, 22 hail, and 154 wind reports in Illinois during July. This follows a very inactive severe weather month in June, with only 1 tornado and 10 hail reports statewide. Although areas of the state needed the rain that accompanied severe thunderstorms last month, several producers reported widespread crop damage from hail and strong winds.

Rain for All, Too Much for Some

As the two maps below show, June was very dry for areas of central and southeast Illinois. For example, Morton in Tazewell County received only 0.50 inches of rainfall in June, approximately 15 percent of normal. In contrast, July was wetter than normal for most of the state, and areas of central and southeast Illinois received 4 to 6 inches more than normal July rainfall. 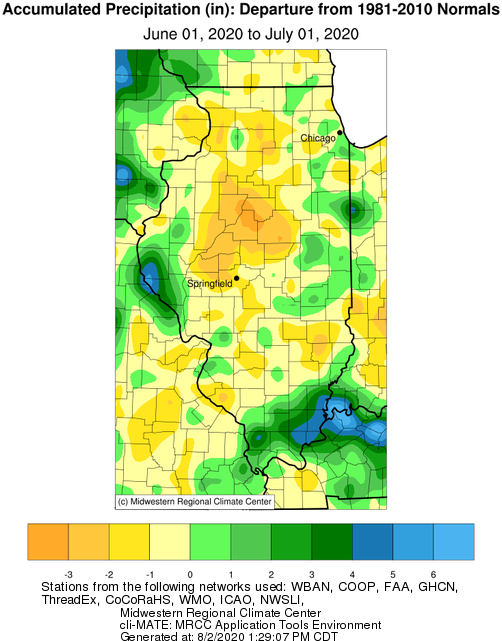 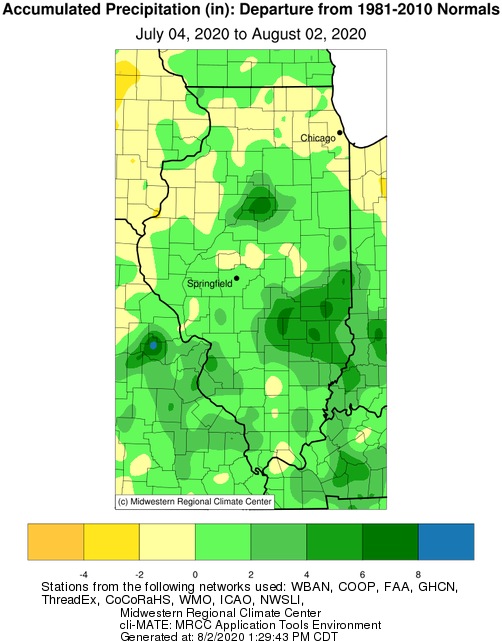 The station at the Peoria airport recorded 5.15 inches in just six hours on July 15, marking the highest six-hour rainfall total on record in Peoria, with the record going back to 1948. This event is approximately a 50-year event based on estimates from the Illinois State Water Survey’s newly release Bulletin 75 study (https://www.ideals.illinois.edu/handle/2142/106653). This means there is a 2% chance of exceeding this six-hour total in Peoria each year.

Twenty-four-hour rainfall totals from this event exceeded 6 inches in parts of Tazewell and Woodford Counties, resulting in widespread flash flooding in agricultural and residential areas. The station in Minonk in Woodford County, for example, recorded 6.50 on July 15. This day, along with a 9-inch rainfall observation in September of last year, are the only two days in Minonk’s 125-year record with more than 6 inches of rainfall observed. 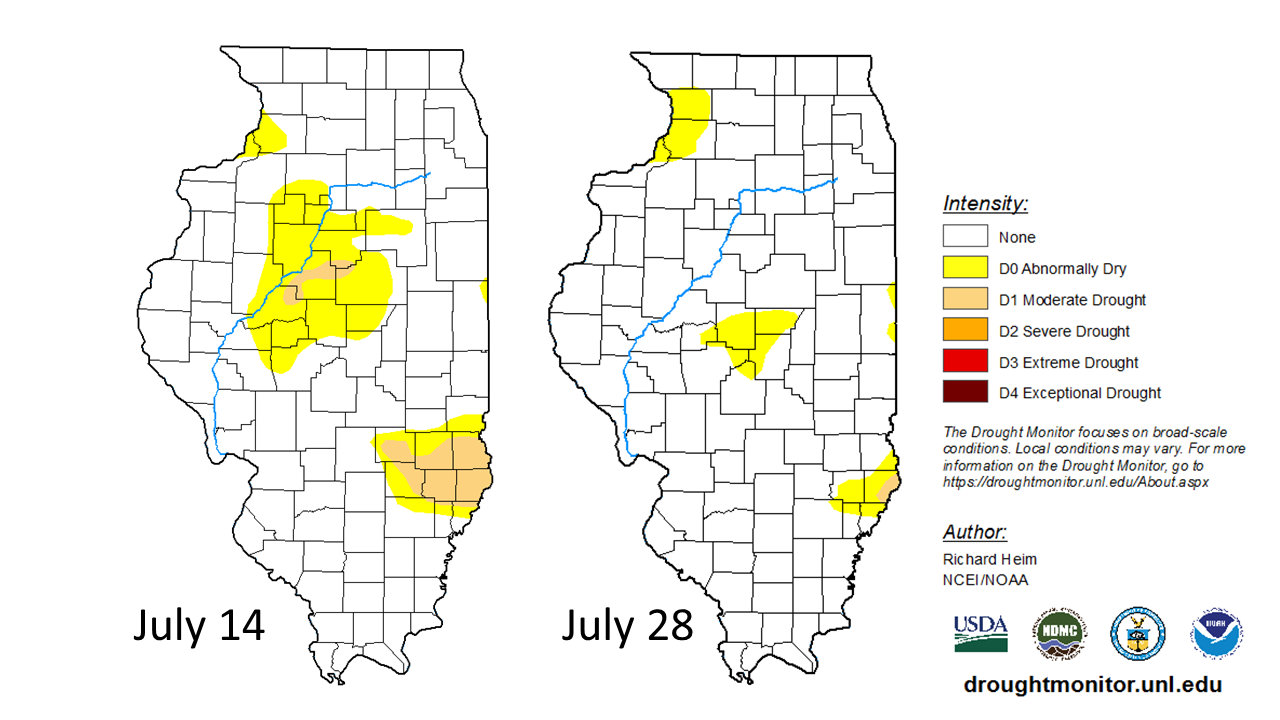 July total precipitation ranged from over 13 inches in central and eastern Illinois to less than 2 inches in the northeast. Overall, statewide July total precipitation was 5.79 inches, 1.71 inches wetter than the 30-year normal and the 12th wettest on record. Single-day precipitation total records were broken at 88 stations across the state last month. Five of those stations broke the July all-time daily precipitation records. Last month was also the wettest July on record at Casey in Clark County, Minonk in Woodford County, and Clay City in Clay County; all three stations have records exceeding 70 years. 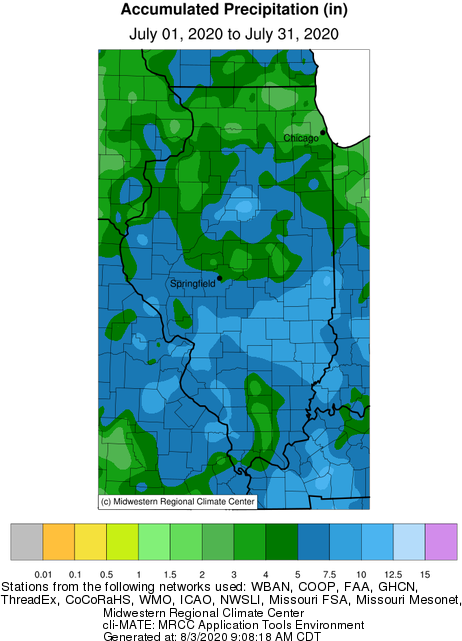 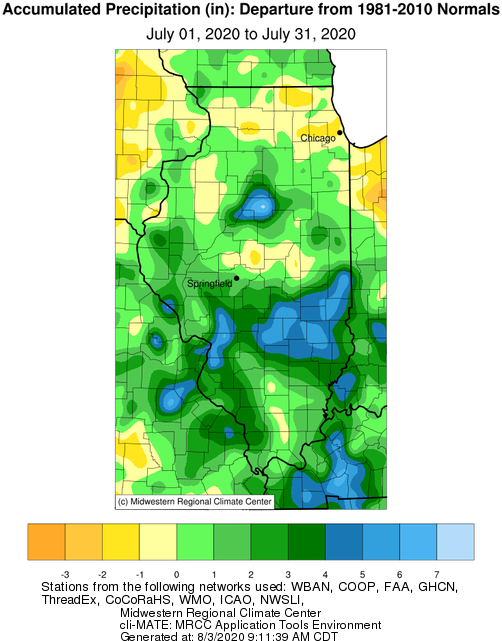 Temperatures have been quite moderate  at the start of August. However, short-term 8- to 14-day outlooks from the NOAA Climate Prediction Center suggest the heat may return later this month, with elevated odds of above normal temperatures in the second week of August. The state is also covered with slightly elevated odds of wetter than normal conditions over the same time period.

Despite the short-term outlook, one-month outlooks indicate elevated odds of below normal temperatures for August as an entire month, with the strongest odds of near-normal precipitation.