February 2019 will be a month remembered for an unseasonably active storm pattern, a majority of the month was characterized by a seemingly constant succession of storms resulting in moderate snow accumulations for the northern counties, and persistent rain events and widespread flooding for the far southern counties.  Between storm systems we experienced noticeable temperature swings, and periods of seasonable weather.

Preliminary results show that February 2019 finished with a statewide average temperature of 28.6°F which is 2.3°F below the long term average.

The maximum February temperature of 70°F was reported at two stations, Dixon Springs (Pope County) on February 3rd, and Kaskaskia River Lock (Randolph County) on February 4th.  These temperatures came less than a week after the historic Arctic outbreak in late January, which shattered numerous all time station and daily record lows across Illinois.  Over the course of five days many stations across the state saw temperature differences of around 70 degrees or more from Jan. 31 to Feb. 4.

The minimum state temperature was -36°F reported at the Mt. Carroll observation station (Carroll County) on February 1st, a day after the station recorded a potential record state minimum temperature of -38°F on last day of January 2019. 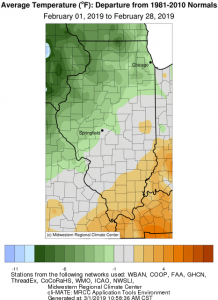 Preliminary statewide average precipitation for February was 3.33 inches, which is 1.27 inches above the long term average.

The highest monthly total was reported at Smithland Lock and Dam (Pope County) with an impressive 10.68 inches.  This ranks as the wettest February on record for the station, with records going back to 1981. 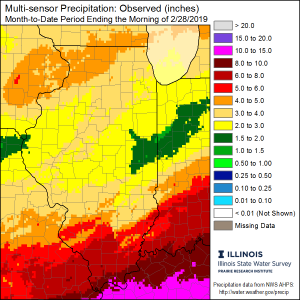 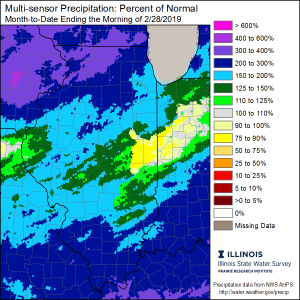 Once final numbers are calculated, Feb. 2019 is on track to rank within the top 15 wettest statewide February’s on record.  Abundant regional February rainfall also contributed to a major flooding event in the lower Ohio River.  Both the Smithland Lock and Dam and Cairo river gauges crested at over 10 feet above flood stage during the last week in February. Maximum river stages are expected to be within the top 5 highest on record, according to data compiled by the National Weather Service.

Soil moisture percentiles for the month of February remained in the  90th percentile or higher across Illinois.

Snowfall occurred statewide during February, but was most plentiful in counties along the Illinois/Wisconsin border, where 10+ inches of accumulation were common (see map below) 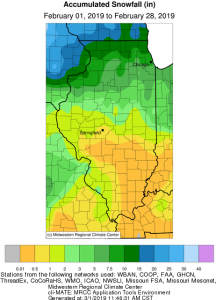 The highest point snowfall total of 25.7 inches was reported at a station in Galena (Jo Daviess County).

Looking ahead at the rest of March 2019, the Climate Prediction Center is favoring moderate probabilities of colder than average temperatures statewide.  The highest probabilities are located in the northwestern portion of the state.  Slightly increased probabilities of a wetter than normal March are forecast for extreme southern Illinois, the same regions that have already experienced unseasonably wet conditions for a majority of the winter.

Check back soon for a recap of the 2018-2019 meteorological winter season.