It was a cold and snowy November in Illinois.

Snowfall
November was an exceptional month for snow lovers statewide, with virtually the entire state seeing it’s first accumulating snow of the season before the month’s end.  In fact by the 15th, with half the month still to go, Springfield Abraham Lincoln Airport had already broken the record for the snowiest November.
Overall monthly snowfall accumulation totals averaged around an inch in southeastern Illinois, up to 15 inches in the northwest, near the Quad Cities, with several locally higher amounts reported. 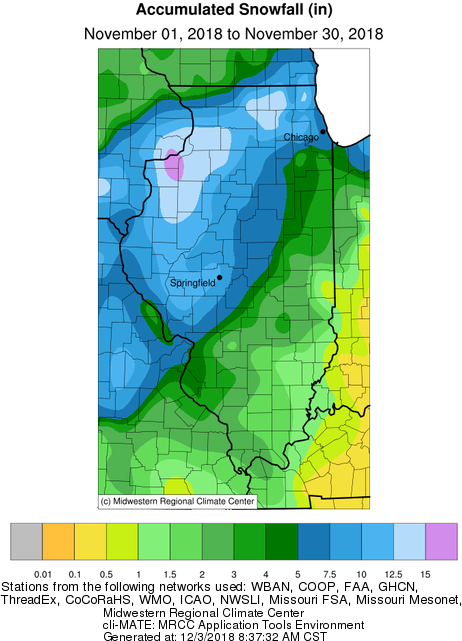 Several outbreaks of unseasonably cold conditions throughout the month helped in bringing the statewide averaged November temperature to a chilly 35.2°F.
Temperatures across Illinois were typically on the order of 5 to 10 degrees below normal, a trend that was felt across most of the Midwest.  The map shows the bullseye for the below normal cold concentrated in sections of northeast Missouri, southeast Iowa, and west-central Illinois. 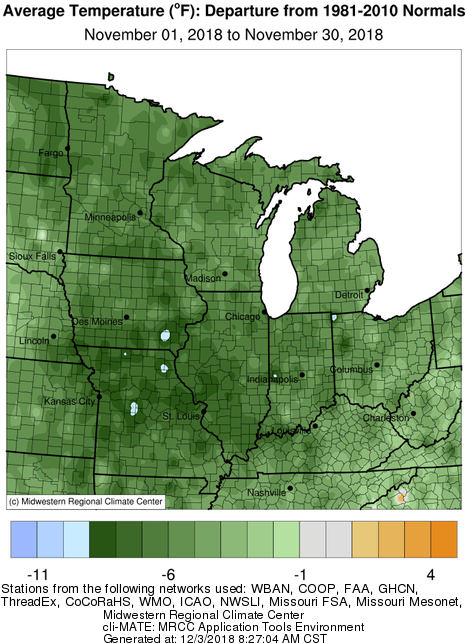 Looking at meteorological Fall (Sept, Oct, Nov), temperatures for the season ended up near normal in southeastern Illinois, and between 2 to 4°F below normal as you head northwest toward Rockford and the Quad Cities (see map). 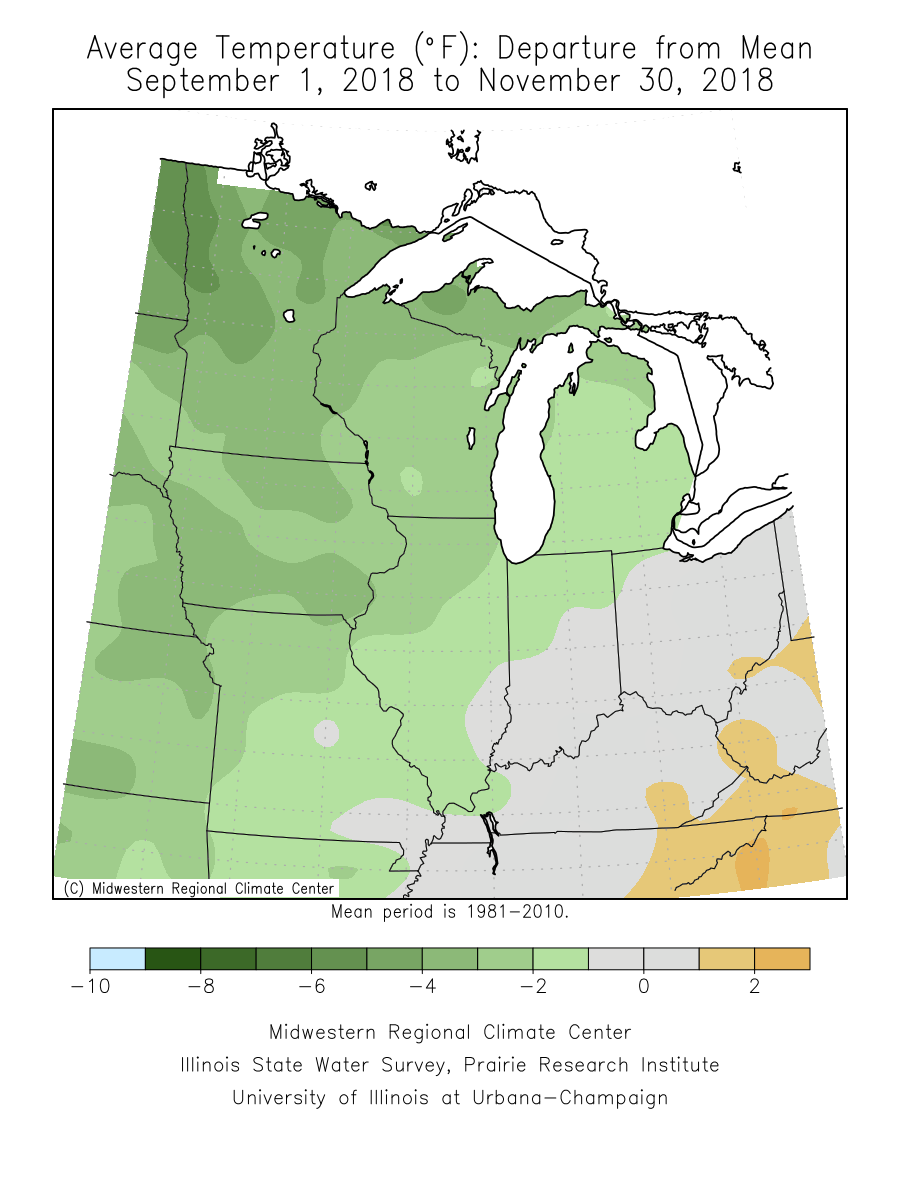 Precipitation for the same period is near normal for the central portion of the state, with above normal totals in the northwest and southeast.  Precipitation totals at Chicago O’Hare and Rockford Airports are currently ranked as the 4th wettest years on record, with a month still to go. 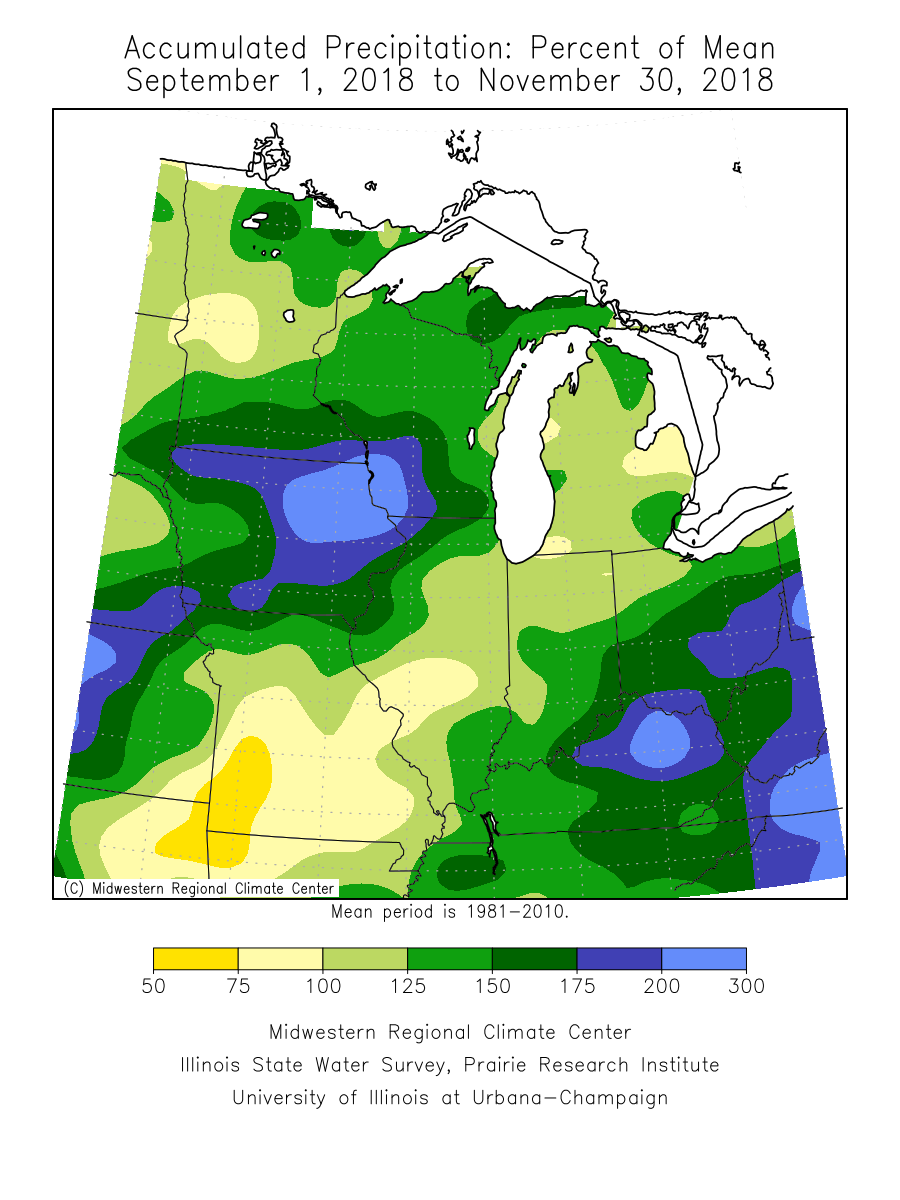 Finally, here is the outlook for December that was released by the National Weather Service (NWS) Climate Prediction Center (CPC) on November 30th.  The precipitation maps show an increased chance of above normal precipitation statewide, becoming more likely as you head westward towards Nebraska.  Temperature wise, there is a slightly increased chance of above normal temperatures statewide, a trend which is noted for much of the eastern half of the country.

November started with several substantial rain events bringing a half to an inch and a half of precipitation to most of the state, with the largest amounts in southeastern Illinois.  Two CoCoRaHs stations in Massac County, and a COOP station in Pope County recorded over 6 inches of rain during the first week of November. 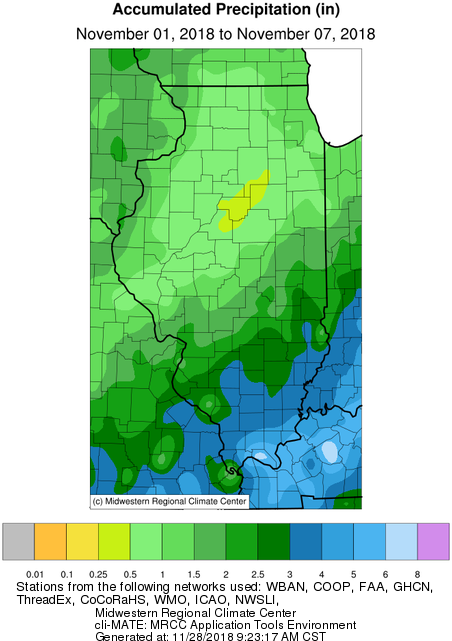 An early season plowable snowstorm, accompanied by unseasonably cold temperatures affected much of the state November 14-15th.  As much as a half foot of snow was reported in locations south and west of Springfield.  The official total at Springfield Abraham Lincoln Airport was 5.3 inches. Total monthly snowfall accumulation in Springfield measured 11.4 inches, ranking November 2018 the snowiest November on record. 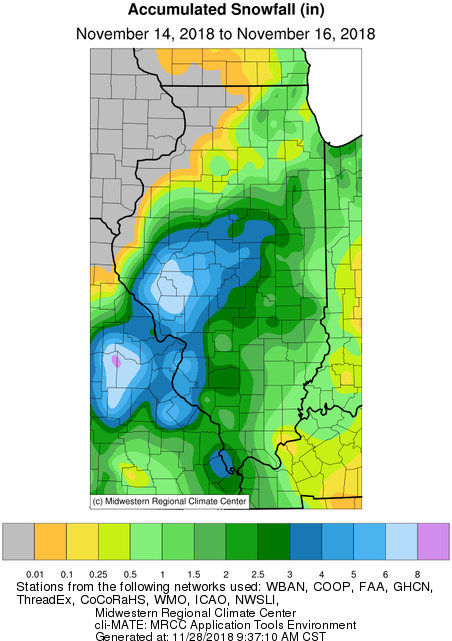 A potent low-pressure system tracked through central Illinois to finish off the Thanksgiving weekend, bringing a wide range of weather to the state.  Thunder, rain, ice, snow, wind, and blizzard conditions were all reported in varying locations on Sunday 11/25/2018.  The map below shows station interpolated snowfall  totals for this event.
Peak wind gusts of 55 mph were reported at Champaign Willard Airport, and 52 mph at Chicago O’Hare. 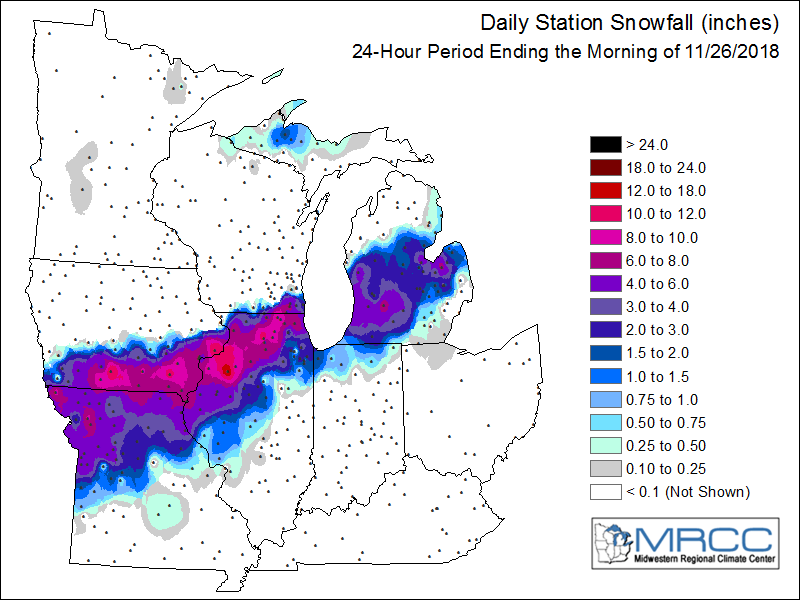 The measured snowfall totals of 11.7 inches at Rockford, and 13.3 inches at Moline, ranks this event as the largest November snowstorm on record for both locations.  The total November accumulated snowfall in Rockford of 15.8 inches, and Moline of 18.4 inches ranks November 2018 as the snowiest November on record for both locations.
A fresh snow pack, coupled with cold air behind this system allowed temperatures to plummet during the start of the last week in November.  Both Moline, and Chicago O’Hare set a record low maximum temperature on 11/27/2018, with recordings of 22°F at Moline and 25°F at O’Hare.
This post was written by Brian Kerschner, who will be taking over the blog next month.