The Farmer’s Almanac states that it “bases its amazingly-accurate long-range forecast on a mathematical and astronomical formula developed in 1818”.   We have learned quite a bit about the weather since then.  And the phrase of “biting cold, snowy” can describe a typical morning in January and February.
The Old Farmer’s Almanac states that their forecast for this winter is based on “a decrease in solar activity and the expected arrival of a weak El Niño, which will prevent cold air masses from lingering in the North.
El Niño
It turns out that the Old Farmer’s Almanac is at least partially correct in identifying a possible factor for this winter – El Niño.  Right now the NWS predicts a 70 percent chance that an El Niño will arrive by this winter.  The question remains regarding the strength of the El Niño.  The current forecasts suggest a weak to moderate event.  As a rule of thumb, stronger El Niño’s typically have stronger impacts on the weather over the US.  Speaking of which …
Here is the schematic of the impacts over the US. We generally see a very active storm track across the southern US, bringing wetter than normal conditions.  The Ohio River Valley tends to be drier because the storms are now tracking to the south.  The colder Canadian and even Arctic Air tends to stay well north, results in warmer than normal temperatures from Alaska through the Great Lakes.  Frankly, a strong El Niño winter in Illinois is kind of boring.  Cold, but rarely below zero; snow, but rarely large amounts; lots of days with highs in the 40s and 50s; and lots of cloudy days. 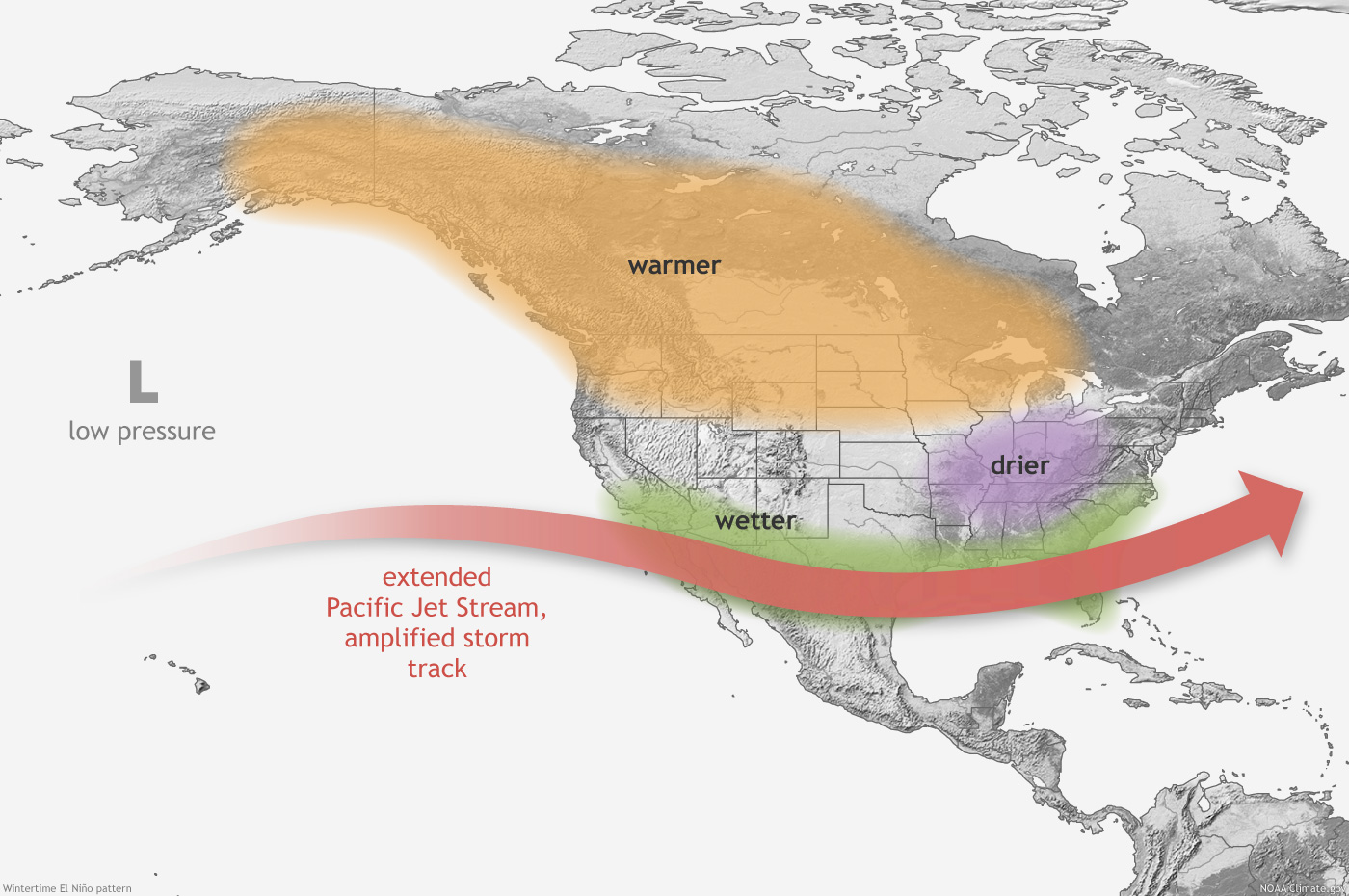 What the NWS Says About this Winter
The official NWS winter forecast for Chicago and for most of Illinois is for an increased chance of above-normal temperatures (maps below). There are two primary climate factors at work. The first is the decade-scale trend towards warmer winter temperatures. And the second is the previously discussed potential El Niño event in the Pacific Ocean.
Unfortunately, there is not a strong indication of how precipitation will play out this winter in the NWS forecast. In past El Niño events, there is a tendency to be drier and to get rain instead of snow due to warmer temperatures.  The NWS rolls out their official “Winter Outlook” in October when we will have a better idea of how this El Niño event may play out.