Summary: we are halfway through January and so far the statewide average temperature is 16.5 degrees, 7.3 degrees below normal. Last year, by mid-January the average temperatures is 25.2 degrees and 1.4 degrees above normal.
The statewide average precipitation is only 0.6 inches, two-thirds of normal for the first half of January. Last year, by mid-January the average precipitation was 0.82 inches, just 0.07 inches below normal. Note that precipitation is a measure of both the rainfall and the water content of snowfall.
Snowfall has been widespread with 2 to 5 inches common in all but western Illinois. For most areas, that is near to slightly below normal. So far our snow has come from fast-moving low-pressure systems out of Canada (so-called Alberta clippers) that are noted for bringing light, fluffy snow without much water content. Last year, some areas in northern Illinois had received zero snowfall in the first half of January and many areas reported less than an inch.

A few areas in northeast Illinois have received over 5 inches of snow. The largest totals for the month are CocoRaHS stations near Downers Grove (IL-DP-127) and Elgin (IL-KN-95), both with 7.4 inches. Amounts of 3 to 6 inches were common across northern and eastern Illinois. Meanwhile, many parts of western Illinois have received less than 2 inches. 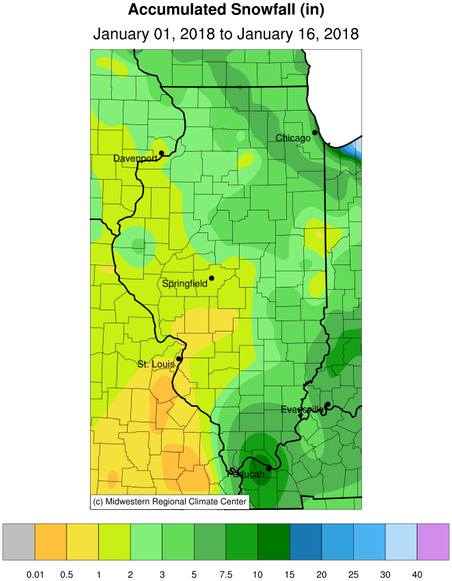 Looking at the accumulated snowfall as a departure from normal (map below), most areas are near to below normal on snowfall. The only area with unusual amounts of snow for their region is far southern Illinois. 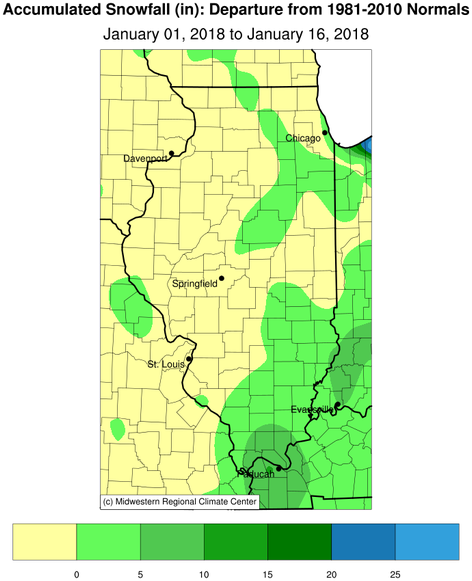 The actual water content of these snowfall amounts are small. Our station here in Champaign reported 3.3 inches of snow in the last event with a water content of only 0.14 inches. That’s a ratio of 24:1 between snowfall and water, far higher than that 10:1 ratio you always hear about on snowfall (10 inches of snow equals 1 inch of water). You can feel the difference when you shovel it off your driveway.

Here are the seasonal snowfall totals for this winter so far. Most of the northern half of the state has between 5 and 10 inches of snow (two lightest shades of green), while the most of the southern half, and especially the southwest, has between 1 and 5 inches. Areas in northern and western Illinois are 2 to 6 inches below normal for the season so far. 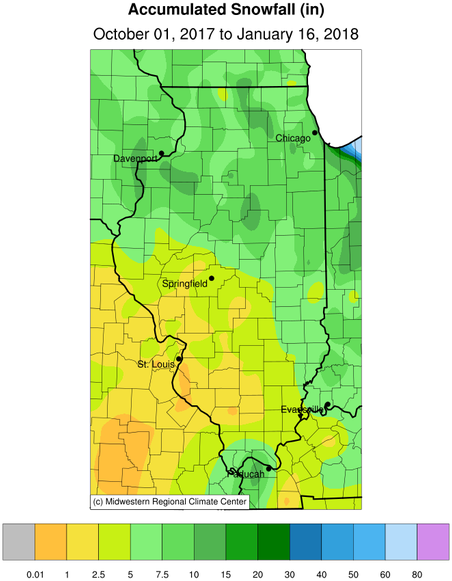