[I will update the statistics and maps on Monday in a new post]
While we are waiting for September to finish, we can say with confidence that it will go down as a warm, dry month. The statewide average temperature so far is 69.3 degrees, which is 3.1 degrees above normal. That is the 20th warmest September on record. That is pretty amazing since September started out cooler than normal. At first count, there are 135 records broken and another 47 tied for the daily high temperatures at individual stations.
The statewide average precipitation for September so far is 0.79  inches, 2.44 inches below normal and the 5th driest September on record. As this map shows, most of the state received less than an inch of rain with only a few localized thunderstorms. 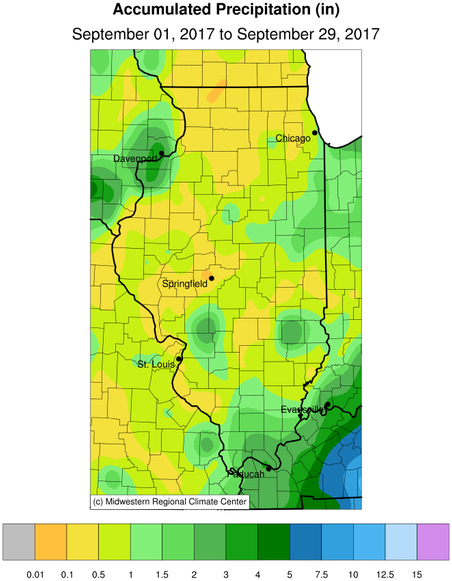 As a result of dry weather, the US Drought Monitor has about 80% of the state in “abnormally dry” conditions and another almost 13% in “moderate drought”. This is based on rainfall deficits, low soil moisture, and low stream flows. According to the USDA NASS report, topsoil moisture in Illinois is rated as 32% “very dry” and an additional 45% rated as “dry”.

The forecast does not look promising for the next 7 days. Expected rainfall amounts range from zero in southern Illinois to maybe half an inch in northern Illinois.