There is an old statistics joke about “Stick one foot in the fire and one foot in a bucket of ice, and on average you are at a comfortable temperature”. That happened to precipitation in Illinois in July. Northern Illinois experienced heavy rains and widespread flooding. Meanwhile, parts of central and southern Illinois experienced dry weather that caused crop damage. However, on average the statewide precipitation was 4.81 inches, which is 0.73 inches above normal.
Three of the highest monthly totals for July in Illinois were Cary (McHenry County) with 13.34 inches, Gurnee (Lake County) with 13.21 inches, and Chadwick (Carroll County) with 13.15 inches.
On the other extreme, some areas in western and southwestern IL were very dry with amounts of less than 2 inches. The lowest monthly total I could find was Quincy Dam with 0.68 inches.
Here are the precipitation maps for July (total, departure from normal, percent of normal) – click to enlarge.

Third wettest July for northeast and northwest Illinois. The state is broken down into 9 climate divisions with similar climate (map below). Records for those go back to 1895. 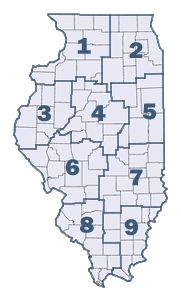 Temperature: The statewide average temperature for July was 76.1 degrees, 0.7 degrees above normal. We had several stretches of 2 to 5 days of hot, humid weather. However, it was often interrupted by periods with slightly cooler, drier air as cold fronts swept across the state.
As if often the case in Illinois in summer, our hottest readings come from places that were dry. Locations that report 100 degrees or more, include Jerseyville with 102 degrees, and three stations – Pittsfield, Effingham, and Belleville – with 100 degrees.