A batch of crocus on the south side of our office building is a reminder of the impacts of warm weather in February. Both January and February have been mild. But on top of that has been a record-setting streak of 60s and 70s in the past week. As a result, many early season perennials such as crocus are coming out a little early. In the past, such warm weather has made any early vegetation vulnerable to the inevitable freeze later on. In 2007 and 2012, a similar scenario played out with damage to corn, winter wheat, alfalfa, and fruit crops across Illinois. The 2007 event was well documented in this report.
In Illinois alone, 257 daily record high temperatures at sites across the state were either tied or broken. Our experience in Champaign-Urbana is typical with five daily records tied or broken on days with highs in the upper 60s and low 70s. The warmest temperature reported for February in Illinois is 79 degrees on the 21st in Perry IL, near Quincy. A nearby site in Pittsfield reported 78 on the same day.
Here is what the temperature departures look like across the Midwest for February. Temperatures have been running 9 to 13 degrees above normal from Colorado to Ohio. For Illinois in particular, the statewide average temperature is 40.3 degrees, 11.2 degrees above normal.

Precipitation across the Midwest is below normal in most areas but is especially pronounced in Missouri, Illinois, Indiana, and Kentucky. 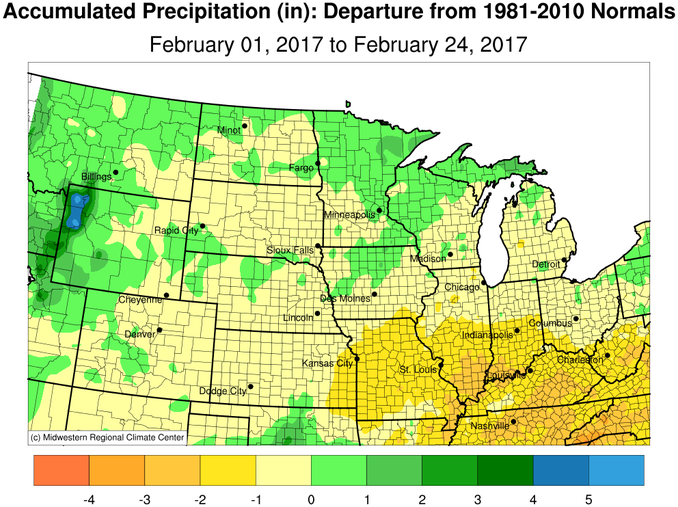 The US Drought Monitor has introduced widespread D0 “abnormally dry” across southern Illinois due to the lack of precipitation and drop in stream flows.  Click on images below to enlarge.