It has been dry across Illinois and most of the Corn Belt in the last 30 days. Below-normal precipitation has occurred from the eastern Dakotas, Nebraska, through parts of Minnesota, Iowa, and Missouri, and across much of Illinois, Indiana, Kentucky, Ohio, and Michigan.

For Illinois, temperatures were close to normal in the second half of May. However, temperatures for the first 12 days of June have been running 2.7 degrees above normal. Meanwhile, the statewide average precipitation for June so far is 1.52 inches, which is 0.7 inches below normal.

Measurements over the last five days here at the Water Survey indicate that we are using approximately 0.2 inches of water per day in the field or about 1.4 inches per week. So if we aren’t getting that much rain per week to make up for the loss, then plants have to rely more on soil moisture to continue growing. In the short term, it is not cause for alarm. For example, it is not unusual for water usage to run ahead of rainfall in June, July, and August. We just don’t want usage to run so far ahead as to deplete all the soil moisture reserves.

According to the National Weather Service, there are chances of rain and thunderstorms through Wednesday before slightly cooler and less humid weather finishes out the week. The potential rainfall totals over the next three days ranges from 0.25 to 0.50 inches in the southern third of Illinois and from 0.50 to 1.25 inches in central and northern Illinois. As you would expect in summer,  the rainfall totals could be locally heavy while nearby areas see little or nothing.

Areas in yellow are down to 1.5 inches below normal, while areas in the lighter shade of orange are down to 3 inches below average. At the same time, the demand on soil moisture has been increasingly rapidly as crops and vegetation develop. 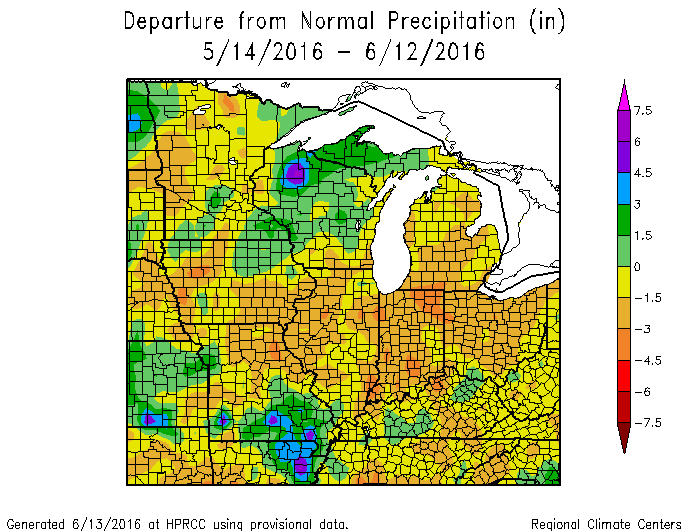 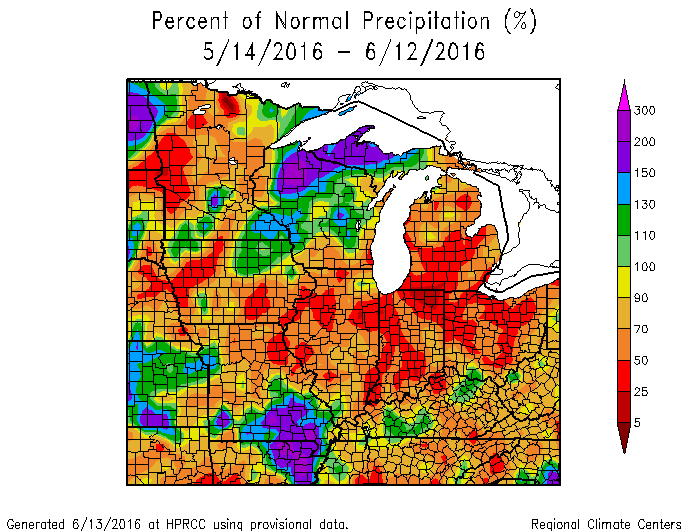