Looking at the latest numbers for May to date, Illinois is 3.5 degrees cooler than normal. Rainfall is within an inch of normal for most areas. Click on the  images to enlarge.

Most models predict the end of El Niño and a brief period of ENSO-neutral by early summer. La Niña is favored to develop during the summer, with about a 75% chance of La Niña during the fall and winter 2016-17. La Niña occurs when colder-than-average waters appears in the eastern Pacific Ocean. It is the opposite phase of El Niño although the effects on the US are not as strong or as clearcut as an El Niño event. I will post more on La Niña soon.

Here are the outlooks for June. Click on the maps to enlarge. Most of Illinois, except for the far north, has an increased chance of being wetter than normal (green). Meanwhile, the eastern third of Illinois has an increased chance of being warmer than normal (red). Areas not shaded and marked EC indicated areas where there are no strong evidence of conditions being too cool, too dry, too wet, or too dry as the case may be. EC stands for Equal Chances of above, below, and near-normal conditions.  EC is not a bad place to be.

END_OF_DOCUMENT_TOKEN_TO_BE_REPLACED

Temperatures over last weekend and early this week have been cooler than normal. How much cooler? Here are the average high temperatures from May 13 to May 18 as a departure from normal. The values range from 6 to 9 degrees below normal in northern Illinois (dark shades of green) and from 9 to 15 degrees below normal (shades of blue) in central and southern Illinois. In other words, we are seeing high temperatures in the 50s and 60s instead of the 70s or low 80s.

According to the National Weather Service, we should start to warm up with high temperatures reaching into the 70s by the weekend and into the 80s next week. 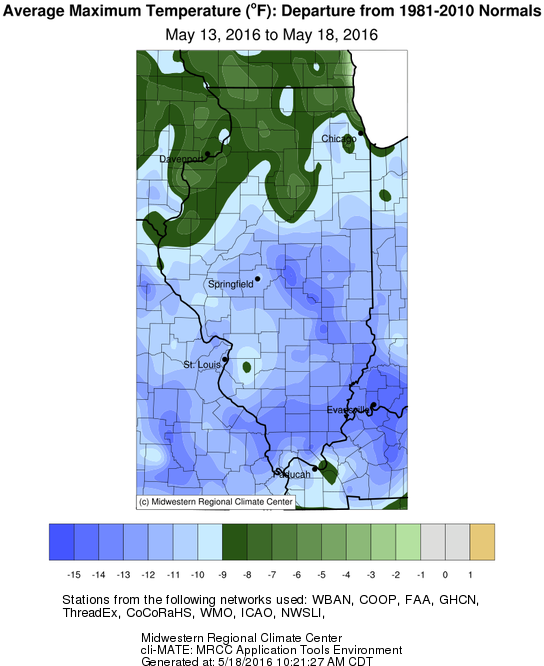 The Illinois State Water Survey put out the following press release today by Dr. Jennie Atkins, the director of our program that measures the soil moisture and soil temperatures in the state …

Champaign, Ill.  – Soils were wetter and cooler than average over most of Illinois in mid-May, according to Jennie Atkins, Water and Atmospheric Resources Monitoring (WARM) Program manager at the Illinois State Water Survey, Prairie Research Institute, University of Illinois.

END_OF_DOCUMENT_TOKEN_TO_BE_REPLACED

On average, May is the wettest month of the year in Illinois with a statewide normal of 4.62 inches. And so far, this May is living up to that reputation. The two maps below show the rainfall totals through this morning (May 11) for northern and southern Illinois. Rainfall totals were heaviest in the northeast quarter of the state with many areas receiving between 2 and 3 inches or more (shades of yellow and beige). Areas in green are a little lower and range from 0.5 to 2 inches (depending on the shade of green).

END_OF_DOCUMENT_TOKEN_TO_BE_REPLACED

The NWS released their latest Quantitative Precipitation Forecast (QPF) out to 7 days. It shows Illinois with potential amounts of 0.75 inches (blue) to 2.5 inches (purple). Also their 8 to 14 day forecast shows Illinois with an increased chance of wetter than normal conditions (second map).

END_OF_DOCUMENT_TOKEN_TO_BE_REPLACED

Illinois has had a persistent dry spot in west-central Illinois since the beginning of 2016. Here is a map of the precipitation departures from normal for the last 90 days. The band from Quincy to Peoria is about 2 to 4 inches below normal.

The good news is that a lot of the dry weather happened during January, February, and March, when demands on soil moisture, rivers, and lakes were very low. If this had occurred in the middle of summer, it would be a different story.  END_OF_DOCUMENT_TOKEN_TO_BE_REPLACED