The latest NASS report from USDA pegs the percent planted at 2 percent. In recent trips around Illinois I have seen very little field work of any kind, except around Quincy. Here are a few things we are seeing in mid April.

Here is the April precipitation as of the morning of April 14. The areas in yellow received between 2 and 3 inches, while areas in the shades of green received between 0.5 and 2 inches. The driest part of the state received less than half an inch and stretches from Quincy eastward along the Illinois River and another patch just south of the Quad Cities. 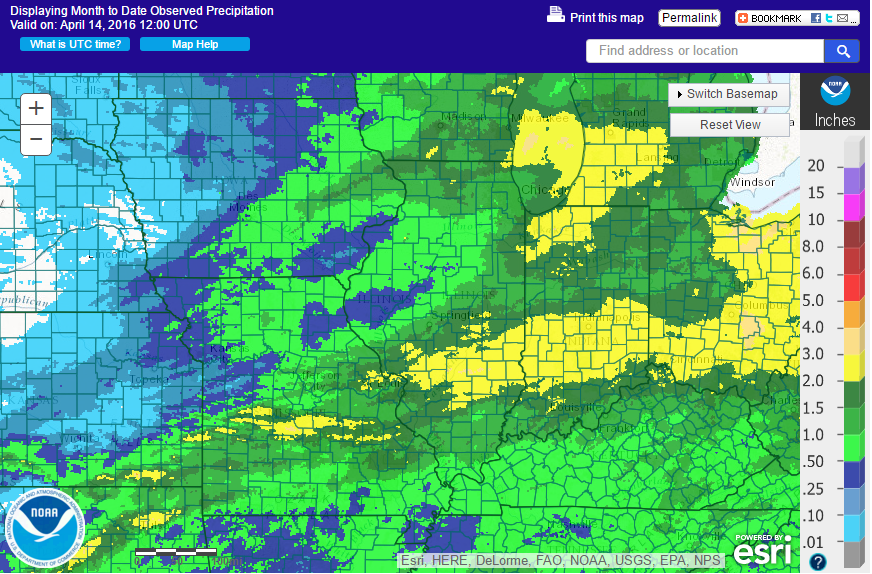 The rain and cool temperatures mean that the soils are having a hard time drying out in most of Illinois. Below is the 2-inch soil moisture from the Water Survey soil moisture network. The soil moisture instrument reports the water fraction by volume. For example, the reading of 0.31 in Freeport means that 31 percent of the volume of soil at that level is water. In other words, an inch of soil would contain about 0.3 inches of water.

As a rule of thumb for most soils in Illinois, any value greater than 0.40 are close to saturation. Values between 0.3 and 0.4 are at field capacity or slightly below, and values between 0.2 and 0.3 are getting dry.  Values below 0.2 means the soils are running out of water available for plants. The one exception is the site at Kilbourne, a very sandy site near the Illinois River. That soil rarely gets above 0.1 and drains quickly at that location.