November finished both colder and drier than average for Illinois. The statewide average temperature for November 2014 in Illinois was 34.3 degrees, 8.2 degrees below average and the fourth coldest November on record. November 1976 was the coldest at 33.4 degrees.

The cold November was not confined to Illinois. November was colder than average for most states from the Rockies eastward (greens and blues in the map below). Just like the winter of 2013-14, the Midwest saw the largest departures from average. Meanwhile, warmer than average conditions prevailed in California and the Southwest.  I discussed the cold central US from January through October in 2014 and how it does not match the rest of the world here. It will be interesting to see the global results for November. 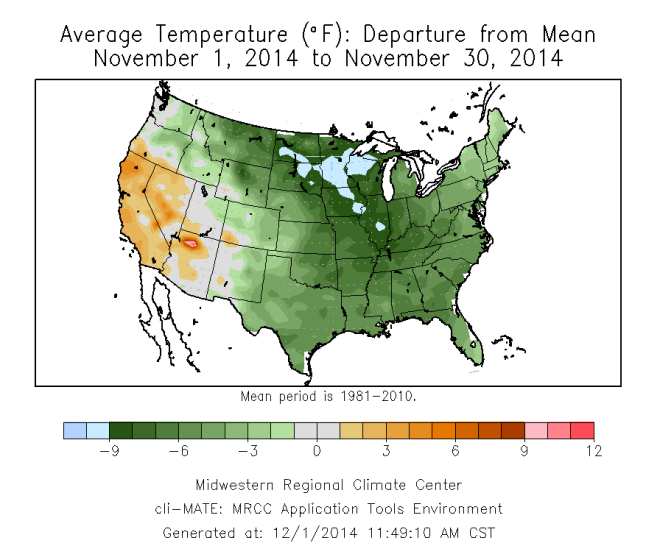 Here are the temperature departures by month for 2014 for Illinois. The NWS outlook for December shows an increased chance of warmer-than-average temperatures for the month.

Here are the monthly precipitation departures for 2014. After wetter-than-average conditions in August, September, and October, the drier November was not a concern for soil moisture or stream flows.

Disclaimer: These numbers and graphs are based on preliminary data and subject to change as more data arrive.